One of the Air Force’s most powerful weapons does not contain jet fuel or have any embedded explosives.

It’s the extensive array of computers that the Air Force uses to accomplish its mission.

Air Force computers are linked to everything from advanced weapon systems to simple personnel databases.

But all of these computers have an important role to play in the Air Force Mission and the software found inside them must constantly be maintained and improved for them to be effective.

That’s why the work that Air Force Computer Systems Programmers do is so important.

They form the backbone of the personnel that helps keep Air Force computer system software as functional and up to date as possible.

Those who enter into this career field will be trained to develop and implement the software that is required to help operate all sorts of Air Force computer systems.

It’s a demanding Air Force career that takes hard work and dedication, but it can also lead to gainful civilian employment once an Air Force member is done with their time in the military.

Here are the prerequisite requirements that must be fulfilled before a new Air Force recruit can enter into training to become an Air Force Computer Systems Programmer.

• Minimum ASVAB Score of 64 in the General category or an ASVAB score of 54 on General combined with a score of 60 or better on the Cyber Skills Test.

• Be between the ages of 17 and 39
• Possess a GED or high school diploma
• Have normal color vision and depth perception
• Be able to lift 40 lbs.
• Prior knowledge of computer software programming practices is preferred but not required
• Successful completion of the Computer Systems Programming Initial Skills course
• A minimum score of 71 on the Air Force Electronic Data Processing Test
• Successful completion of 8.5 weeks of Air Force Basic Military Training held at Joint Base Lackland in San Antonio, TX (Not required of those with prior military experience or training)
• Completion of a current Single Scope Background Investigation (SSBI) that leads to the ability of an Airman being granted access to Secret or higher-level material

These are the training steps required in order to be certified to do the jobs that are asked of Air Force Computer System Programmers.

Technical training for this Air Force specialty takes place at Keesler Air Force Base which is located near Biloxi, Mississippi.

It provides the Air Force recruit with the basic knowledge they will need to succeed long term in this career field.

The recruit will learn such things as the type of computers that the Air Force uses, what the purpose is of those computers, and the other support equipment that is associated with them.

There is simply too much for a recruit to learn to just leave technical training school and go right into a new position as a qualified Air Force Computer Systems Programmer.

Because of this, the new technical training school graduate can reasonably expect several months of on the job training at their first permanent duty assignment.

During this time the new recruit will work closely with a senior Air Force member that will try to pass on a good bit of the software coding and programming knowledge that they have gained while performing the tasks that this career field demands.

This on the job training period will focus more closely on the exact computer systems and software that are used by the recruit’s new unit.

How Much Are Air Force Computer Systems Programmers Paid?

Air Force base pay is always determined by a combination of current rank and the number of years an Airman has spent in the service.

Those without prior military experience will most likely be initially classified somewhere between an Airman Basic (E-1) or Airman First Class (E-3).

The higher ranks of Airman (E-2) or Airman First Class (E-3) or given to those with previous computer software programming experience or associated schooling.

Other forms of pay and incentives may include such things as:

All health care requirements for any military member are always 100% free.

What’s Life Like as an Air Force Computer Systems Programmer?

This is a faced paced and very demanding Air Force job that comes with the stress that those working conditions can sometimes create.

It is also a very important and rewarding Air Force specialty that takes a lot of shared input and teamwork to do the job properly.

Here are some of the duties that any Air Force Computer Systems Programmer may be asked to take on:

• Perform as a computer system analyst, coder, tester and manager
• Do software application, design, development, maintenance, testing, configuration and supporting documentation
•  Help to come up with standardized tools and interfaces that work in accordance with Air Force Network Operations guidelines
• Protect operating systems and software and make sure compliance with DOD directives is met regarding computer and communication security, unauthorized access, and misuse
• Design and implement program code so that it meets system specifications and requirements
• Analyze software output for bugs, logic errors, and syntax errors and then correct any problems that are found with these
• Initiate proposals for upgraded system requirements, analyze requests for software improvement, and prepare documentation and specifications for briefings and study teams regarding these matters
• Develop and help implement policies that enable effective information discovery, data indexing, data storage, software life cycle management, data retrieval, and data sharing

Airmen who take on the role of Air Force Computer System Programmers will usually work in comfortable office style settings.

This is because computers must be kept cool and contaminant free as much as possible.

Those that perform the duties of an Air Force Computer Systems Programmer will most likely have some temporary duty assignments during their time in the military.

Other than that, most of the time the active duty member will have long periods of time assigned to the same Air Force installation.

That means this is not a bad Air Force job for those that have families.

Most of the people who have taken on this job role in the Air Force like the work atmosphere and teamwork but are not always happy with the long hours and occasional temporary duty travel that comes with it.

Here is what three former Air Force Computer Systems Programmers had to say about their experiences in reviews found on the website indeed.com: 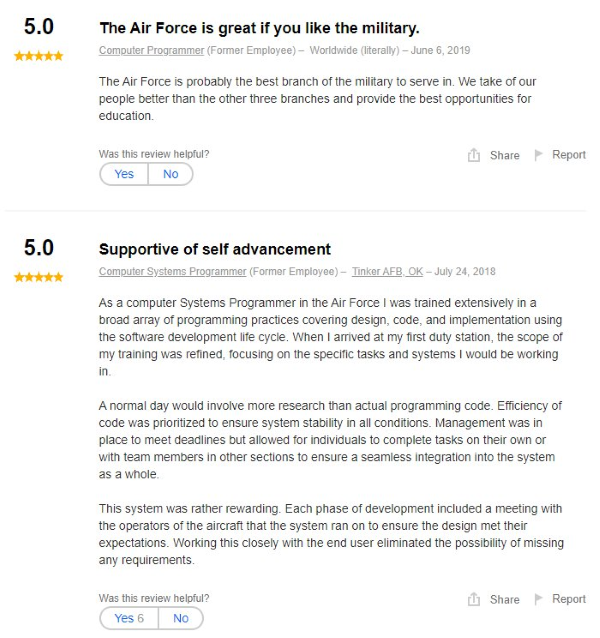 We live in a day and age where computers play a role in almost every aspect of everyday life.

That creates a huge demand in the labor force for those that know how to install, design, and reprogram any type of software.

This means that those Air Force Computer System Programmers who did their jobs well should never have any problem finding work in the civilian world.

As a matter of fact, these jobs are so plentiful that a former Air Force Computer Systems Programmer can find a related job in just about any city that they desire to live in.

Here are some of the types of job positions in the civilian world that Ex-Air Force Computer Systems Programmers are qualified to fill:

Some notable companies that can always use the services of a competent Computer Systems Programmer include:

Those former Air Force Computer System Programmers who go on to work for Federal Government branches will get the bonus of having their military time count towards pay, retirement, and the number of paid holidays they receive each year.