Imagine being required to depart on a moment’s notice, in a clean, crisp, pristine uniform, and… oh, by the way, pick up these food items on your way in.  Also, don’t be late.

You rush to get the necessary food items, board your plane, and prepare to welcome your passengers onboard. Once they are safely onboard, and the flight is in the air, you will be required to prepare a five-star caliber meal for each of your passengers in addition to attending to their needs, ensuring their safety and comfort, and performing all of your other duties.

You also might be on a different continent halfway around the world when the plane lands.

This is the life of an Air Force Flight Attendant.

Along with these chores, other duties include providing for passenger safety during aircraft operations, performing preflight, through-flight, and post-flight inspections of an aircraft emergency, cabin, and galley equipment, and purchasing required foodstuffs and supplies to serve said meals and beverages.

It is Air Force Flight Attendants who attend to the President of the United States aboard Air Force One, as well as the Vice-President, Secretary-of-State, foreign dignitaries, and other important domestic and foreign government officials.

However, you cannot join the Air Force as an Air Force Flight Attendant.  Flight Attendants (FAs) are existing Air Force airmen normally at the 5-Skill level that must retrain into the 1A6X1 career field. It is not an easy process. Competition is fierce.

If you are lucky enough to even get accepted, please be certain that your seat back is in an upright position and your tray table is stowed.  Make sure your carry-on luggage is placed completely under the seat in front of you.  Also, fasten your seat belt, it’s going to be a bumpy ride.

To become a Flight Attendant in the United States Air Force, there are specific requirements and qualifications one must meet, which include:

Since Flight Attendant is a retraining AFSC, we will forgo the Basic Military Training (BMT) requirements that all Air Force personnel must go through at Joint Base (JB) San Antonio-Lackland, TX.

Instead, we delve straight into the requirements of an Air Force Flight Attendant, or FA.

In order to even be considered, potential candidates must go through a records review, a flight physical, obtain five letters of recommendation, and go through a security clearance.

If the potential FA makes it through those hurdles, next in line is an extensive, week-long interview process at Joint Base Andrews, Maryland.

If (and that’s a huge if) you are accepted, training begins.

Water and combat survival training at Fairchild Air Force Base in Washington is also required.

Flight attendants are then assigned to and sent to their duty stations. After arrival, FAs must attend a one-week training course at a Federal Aviation Administration (FAA) certified training facility.

Air Force Flight Attendant qualification training begins in earnest when the FA returns to their duty station. This training starts with the classroom and moves on to training in the air with actual passengers.

In addition, Air Force Flight Attendants must train on the specific aircraft to which they are assigned, as well as culinary training as necessary.

In total, it takes about 18 months of on-the-job training before an Air Force Flight Attendant is fully qualified.

Even after that, FAs are required to be re-evaluated every 12-17 months to ensure proficiency.

How Much Are Air Force Flight Attendants Paid?

Pay for an Air Force Flight Attendants is identical to all other enlisted personnel (in all branches), based on an airman’s rank and length of service.

Air Force Airmen with AFSC 1A6X1 may also be entitled to other forms of compensation including basic allowance for housing (BAH) and base allowance for subsistence (BAS) pay if eligible.

What’s Life Like as an Air Force Flight Attendant?

Specific tasks for an Air Force flight attendant are officially to provide for passenger safety and comfort during aircraft operations, supervise and perform loading and off-loading of passengers and baggage, ensure access to escape exits, and perform pre-flight, thru-flight, and post-flight inspections of aircraft emergency, cabin, and galley equipment.

However, there is so much more than just that. These include:

The ability of an Air Force Flight Attendant to perform as a culinary expert while traveling 500 MPH at 35,000 feet altitude and provide a meal worthy of a five-star restaurant in a tight space cannot be overstated.

Meal choice is determined by the dignitaries aboard and are not at the discretion of the Air Force or the FA.

Mainly for security reasons, food purchasing and preparation is done solely by Air Force flight attendants prior to each flight — often on a day’s notice.

Tech Sgt. Farmer explains, “The crew are the only ones that are involved in any part of the food we serve, from start to finish. No one else handles the food.”

The Air Force takes the in-flight culinary experience very seriously. They regularly bring in world-renown expert chefs to teach classes, sparing no expense to fly the culinary experts in and pay them for their services.

Reviews from former Air Force Flight Attendants on both indeed.com and glassdoor.com are overwhelmingly positive, but make sure to mention the long hours and hard work required to be an Air Force FA. 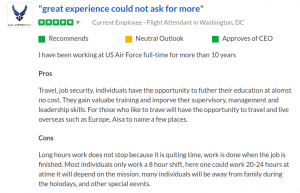 Air Force Staff Sergeant Melissa Magyari plainly states, “Long work hours are a given with this job. With next year being a presidential (election) year, I’ve been told not to expect to be home much at all.”

“The biggest misconception about our job is that it’s as easy as being a commercial flight attendant. The commercial airlines would hire at least three to four different positions to do what’s all-encompassing in our job title.”

“I think the physical labor is the most challenging part of the job; from lifting equipment, standing on our feet all the time to being awake when everyone else is asleep,” Tech Sgt. Moore adds. “We are the safety experts, so we have to be up and sometimes we forget to take care of ourselves.”

Her fellow FA, Staff Sergeant Ashleen Martinez agreed with her colleague and joked “We barely eat or drink water, but it’s worth it. I like the longer missions because you have a chance to go to the bathroom.”

However, Martinez and Moore expressed satisfaction with their jobs as Air Force Flight Attendants.

“We get to work and interact with our nation’s leaders,” Tech Sgt. Moore said, “It’s one of the best jobs in the Air Force.”

The 76th Airlift Squadron has a total of 24 flight attendants who average approximately 25 missions per month. Missions can vary from one day to 15 days.

There are currently about 215 active duty flight attendants serving in today’s Air Force. Of these, 38.14 percent of these are male, while 61.86 percent are female.

Obviously, a flight attendant with major airlines is a great fit for Air Force Flight Attendants leaving the service. However, the duties and responsibilities of a commercial flight attendant are a far cry from the challenges, experience, and opportunities that they were presented while in the Air Force.

Their Top Secret clearance also makes them prime candidates for jobs aboard “Janet” – the US government’s top-secret airline that ferries government contractors, employees, and military personnel to and from their home airports to their place of work daily.

Janet is run by defense contractor AECOM and mainly serves the Nevada National Security Site (including Area 51 and Tonopah Test Ranges) flying out of its private terminal at Las Vegas’s McCarran International Airport in Nevada.

Janet has a fleet of 11 planes and serves 15 destinations.

A culinary career is also an option for ex-Air Force FAs. The culinary training FAs receive in the Air Force along with the experience received preparing and cooking five-star meals in-flight make them excellent job candidates for finer dining establishments and resorts throughout the world and the country.

If you are considering joining the Air Force, you are not going to start your career as an Air Force Flight Attendant. However, later in your career, if you have the itch and are proficient at time management and multitasking, pursue it.

For a dedicated Air Force airman, a career as an Air Force Flight Attendant is definitely a possibility.

Are there flight attendants in the Air Force?

There are currently about 215 active duty Flight Attendants in the U.S. Air Force, and they ensure the safety and comfort of dignitaries on USAF aircraft. They also serve on flights with the President, Vice-President, and Secretary of State.

How much do Air Force flight attendants make?

USAF flight attendants (FA) are paid accord to rank and time in service, like other personnel. However, these enlisted crewmembers may be eligible for flight incentive pay.

How long is Air Force Tech school for stewardess?

Training to become a USAF flight attendant is lengthy and extensive. They must accomplish the same survival training as other crewmembers. Training to become certified is two weeks, but continuing training in safety and specific aircraft is ongoing.

How can I be a USAF flight attendant?

Only active airmen with a 5-level in their AFSC may apply to become a flight attendant. You must be a US citizen, over 21, qualify for a Top Secret security clearance, and pass a flight physical.

Where are USAF flight attendants stationed?

USAF Flight Attendants (FAs) are usually stationed at a few key bases, including Andrews, Edwards, Hickam, MacDill, Offutt, Scott, and Lackland in the U.S. Overseas, they may be stationed at Chievres AB, Belgium or Ramstein AB, in Germany.