If you hear rumors about the E4 Mafia, know that the stories are true. However, you are likely never to receive confirmation of its existence.

When thinking about the E4 mafia, it is vital to understand that E4s, while not actually possessing legitimate power to command troops or make decisions, are seniors among junior enlisted service members.

However, despite having little operational power, E4s know how things work and how to get things done.

If you need something, an E4 has your back.

If you prove to be a pain to those around you, that same E4 has the power to make your life miserable.

The ranks for enlisted service members are E1 to E9, but the Junior enlisted are the lower ranks, and an E4 is the senior of all junior ranks. Typically, the lower junior ranks have less than three years of service under their belts.

E4’s are not supervisors, but they have the experience necessary to get things done and know what needs doing.

Also, because they are not Non-Commissioned officers and cannot command troops, they do not have the power of higher ranks.

However, just because they lack the power to supervise troops does not mean that they cannot make things happen. In fact, and E4 knows the work put in by lower-ranking service members.

Plus, they have been around long enough to know who does what and to hear all the news blowing in the wind. They know everything.

Also, an E4 is in a situation where they can farm out duties to lower-ranking service members.

However, they are also responsible for ensuring the work gets done because we all know sh$i rolls downhill in the military.

NCOs might think they run the show, but the E4s have their finger on the pulse.

Unofficially, the E4 mafia is a network of upper-level enlisted service members who look out for one another.

If you need a favor or a problem resolved, you will likely need the talents and know-how of someone who knows what is going on.

This underground network of E4s has perfected the skill of delegating work and handling favors. The hardest part about it is to follow the (unspoken) rules and to look busy. 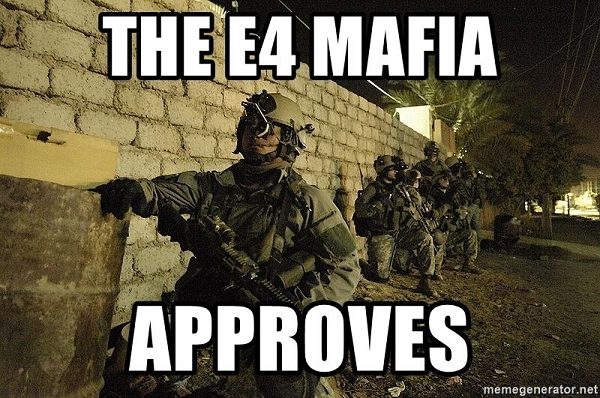 While it is not a fight club, the first rule of the E4 mafia is you do not talk about the E4 mafia. Think of it as the need for plausible deniability.

In all situations, you never sell a brother out. Furthermore, deny the possibility that things went wrong because of your own actions, especially if there is limited evidence to suggest you had anything to do with shenanigans.

Remember, if an E4 asks you a favor, it is likely within your best interest to offer a hand.

However, remember the rule about plausible deniability. Plus, you never know when it is our turn to ask for help.

The E4 mafia is built upon the need to support junior-ranked service members. Therefore, do not forget about your buddies.

If you ever find yourself in doubt, be quiet. This includes not reacting to requests for volunteers.

Look busy. When in doubt, carry a notebook or clipboard and look like you are on your way to do something vital. Higher-ups tend to ignore those who look like they know what they are doing.

It is critical to understand that those with a higher rank and position of authority rely heavily on those of lower ranks to get work done.

Supplies need ordering, appointments scheduled, and pretty much everything that makes life easier for everyone is because of someone at the bottom of the ladder.

It is wise not to kick down the ladder, especially if a member of the E4 mafia is just below you.

E4’s pay attention and many become informal leaders of sorts.

Remember Where You Came From

As things go in the military, E4s face promotion.

Now that you have more responsibilities, remember that sh$t rolls downhill.

Therefore, you are likely to face the consequences if you turn on your old friends with your new position of authority.

The most important thing to keep in mind about the E4 mafia is that they are a group of like-minded hard-working entry-level service members.

The rank of E4 means those a part of the E4 mafia is bent on supporting and protecting those of lower rank.

While the underground group of individuals works together to help each other out.

If need be, they can work together to make someone miserable, as well.

Remember, promotion to an NCO is not like Peter Pan. Do not forget the magic of the people who had your back.

At the end of the day, the most important lesson is to remember where you came from. Also, keep in mind the efforts and work put in by others who support you who are of a lower rank.

Learn more about the E4 Mafia, including what role they play in the military, how they get things done, what rules they live by, and more.