There are many critical jobs in the Navy that do not involve combat readiness positions, and being a Navy Yeoman is one of them.

No military in the world, including the US Navy, can function without the help of strong office and administrative support professionals like Navy Yeoman are.

Although many refer to Yeoman as clerks, they act much more like important administrators than they do simple clerks.

Here are some of the duties that these naval office administrators are tasked with.

As one can clearly see, there is much more involved with being a Yeoman than most people realize.

Being a Navy Yeoman requires an enlisted member to be focused on what they are doing at all times and pay attention to even the smallest details to get the job done right.

Yeomen provide the backbone for keeping Navy personnel and other records organized and maintained in a highly usable manner.

This below YouTube video describes in more detail what it takes to be a Yeoman in the US Navy:

Requirements and Qualifications
Training and Career Path
Pay and Benefits
What’s Life Like as a US Navy Yeoman?
Job Reviews
Civilian Career Opportunities

US Navy Yeomen Requirements and Qualifications

Here is what it takes to qualify to start training to become an enlisted Yeoman in the US Navy.

There are some additional requirements along with higher ASVAB scores which are demanded of those who want to serve in a Yeoman capacity on board a Navy submarine (YNS Rating).

Some electrical knowledge or background will substantially increase a person’s chances of being accepted to serve as a Yeoman on a submarine.

Once all of these requirements are fulfilled, an enlisted member will then be allowed to attend the Navy technical training school for this enlisted job.

Related Article:  20 Reasons to Join the Military (and 7 reasons not to)

Training and Career Path to Become a US Navy Yeoman

Here is the training that it takes in order for any Yeoman recruit to perform the duties on their own that this Navy position requires.

Navy A School for Yeoman training takes place at the Naval Air Station in Meridian, Mississippi.

During their time in tech school, a Seaman will familiarize themselves with the most commonly used Navy forms and will be taught the proper procedures of for doing personnel administration duties.

Approximately half of the way through technical training school, a Seaman will be made aware of their next duty assignment.

As with most Navy jobs, there will be an on the job training period before a Navy recruit can fulfill on their own all of the responsibilities that any Navy Yeoman position requires.

This training will be done by select NCO’s that are very experienced at doing the duties that a Navy Yeoman normally does.

This training will take place at a new recruit’s first permanent duty station.

How Much Are US Navy Yeoman Paid?

As with all military positions, the pay is determined on a set scale that various federal government branches establish.

Yeoman pay is based on two characteristics.

These are an enlisted member’s current rank and the amount of time they have spent in the military.

Most new Yeoman that are not prior military enlisted personnel will start out at the pay grade of Seaman Recruit (E-1) with less than two years of experience.

In certain cases, the initial rank of Seaman Apprentice (E-2) or Seaman (E-3) may be given to those individuals that have special skills or schooling that will make their transition into this Navy profession easier.

Anyone interested in joining the Navy as a Yeoman should definitely talk to their recruiter about this.

Here is the current paytable for Navy enlisted based on rank and time in service:

Advancement through the Seamen ranks (E-1 to E-3) is done simply by time in grade.

Those wishing to become enlisted non-commissioned officers in the Navy (E-4 and above) will need to achieve a good test score combined with their current time in grade to advance in rank.

There are other forms of payment that may add to someone’s paycheck while they are serving their country in the Navy too.

Enlisted personnel are also encouraged to pursue continuing studies on their own time.

Much of the expense of these continuing studies will be paid for by the Navy as part of an enlisted person’s benefits package.

Since being a Yeoman is such an important position that all Navy units must have, there is a lot of job variety and location variety for those acting as naval Yeoman.

So there is just as much chance for a newly trained Yeoman to be assigned shipboard as there is they will be assigned to a naval base.

Yeoman can also be assigned to help support multi-branch military facilities and work for treaty organizations such as NATO (North Atlantic Treaty Organization).

One of the best things about being a Navy Yeoman is it’s a fairly stable position when done on a base.

That makes it very conducive to bringing up military dependents in a fairly normal family atmosphere.

Most work that a Yeoman will do is done in a typical office setting.

This may involve working alone in a totally unsupervised setting or working alongside others in an environment where everyone is closely supervised.

Temporary duty stations or remote assignments may result in a Yeoman working in less than desirable office environments.

Sometimes there will be late-night shift requirements for Yeoman positions that must be manned around the clock.

Of course, there is always the possibility of temporary duty assignments and other short training periods spent away from an assigned base too.

As with Most Navy positions, there is also a good chance of being assigned to shipboard duty which could result in a Yeoman spending an extended period of time away from home.

Here is what some enlisted members who served in the Navy as a Yeoman had to say about their experiences on the website Indeed.com: 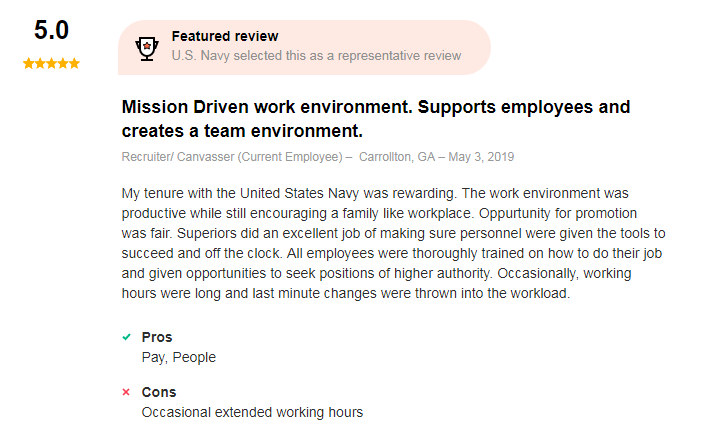 Most people that have served as Yeoman in the Navy admit that while the job can be demanding and stressful, it also can be rewarding and help launch a decent paying civilian career.

Anyone who works as a Yeoman in the US Navy will never lack for a civilian job unless they choose to do so.

There are a vast amount of civilian employers that can use the skills that enlisted members have gained while working as a Yeoman in the US Navy.

Almost every sizable business needs such positions filled as those of executive secretaries, data entry personnel, employee administration, legal secretary and other positions which Ex-Navy Yeoman are highly qualified to do.

If a Yeoman is given a high-security clearance (Secret or top Secret) during their time in the Navy, this too is a valuable asset to have when job hunting.

Here are some examples of civilian job titles that Ex-Navy Yeoman have been hired to fill (Note: some of this reflects upon the specific job duties a Yeoman had while serving in the Navy)

If a Yeoman is given a high-security clearance (Secret or Top Secret) during their time in the Navy, this too is a valuable asset to have when job hunting.

It may qualify them for administrative positions with such government agencies or civilian contractors as:

As you can see, civilian job opportunities are truly virtually unlimited for those that have served as Yeoman in the US Navy.