There are a wide variety of command and control operations and communications stations that the Air Force and other military branches have in place.

Working these command and control centers and managing their message traffic falls under the responsibilities of a well-trained Command and Control Operations Specialist.

These command and control centers can handle anything from military transport activities to command stations that are part of America’s space defense systems and nuclear umbrella.

Duties and responsibilities that Air Force Command and Control Operations Specialists have to take on include:

This is an important and rewarding Air Force career that demands attention to detail and the ability to respond quickly under pressure.

It also is an Air Force career choice that is challenging, exciting, and one in which an Airman will rub elbows with high ranking officers at their assigned command center.

Here are conditions as to which an Airman or other Air Force cross trainee have to meet in order to enter into training for this career field.

Once all of these requirements and preconditions have been met, an Airman will then proceed to their next duty assignment to start technical training school.

These are the necessary training steps in order for an Airman to be able to perform the duties of a Command and Control Operations Specialist on their own.

The tech school for this particular Air Force specialty is not that long.

It consists of only 4 weeks of technical training at Keesler AFB in Mississippi.

During this time an Airman will be introduced to such job-related tasks as receiving, processing, and disseminating emergency action messages via voice and copy recording systems.

The Airman will also learn to encode, decode, transmit and relay command decisions.

They will also be taught how to coordinate and execute search and rescue activities.

As with any Air Force job, there will be an extensive hands-on training period that follows after finishing technical school.

This training will take place at the enlisted member’s permanent duty station.

This training will be conducted by an Airman’s peers that are highly experienced at Command and Control Operations.

Once this on the job training period is complete, an Airman will then be able to handle all of the duties that come with being a Command and Control Operations Specialist on their own.

Here is a video that talks more about the training required for this Air Force specialty:

How Much Are Command and Control Operations Specialists Paid?

As with all military jobs, enlisted personnel base pay is calculated on a set scale that is on both rank and time in service.

Those without prior military experience or other relevant career-related experience will most likely be initially classified as an Airman Basic (E-1).

Those with career-related experience or schooling have a chance to start out as an Airman (E-2) or Airman First Class (E-3).

Here is the current Air Force enlisted pay scale that shows what an enlisted member’s base pay will be based on their current rank and time in service.

Other forms of pay and incentives may include such things as:

Of course, all health care requirements for any military member are always 100% covered.

Every Air Force member is also allowed weekly days off and 30-days paid leave each year during peacetime.

What’s Life Like as a Command and Control Operations Specialist?

The hours can be long when performing this job and the conditions it’s done under can be stressful at times.

With that being said, much of the time it also offers a fairly stable working environment.

That means that other than occasional temporary duty and short training stints it can be a job that provides a fairly stable environment for one’s family.

There will be some shift work and on-call hours that sometimes come with the duties assigned to Command and Control Operations Specialists.

Those who have served in this capacity in the Air force generally have an overall favorable impression of this Air Force job.

Here are a couple of reviews taken from glassdoor.com that were written by those who have served in Air Force Command and Control Operations: 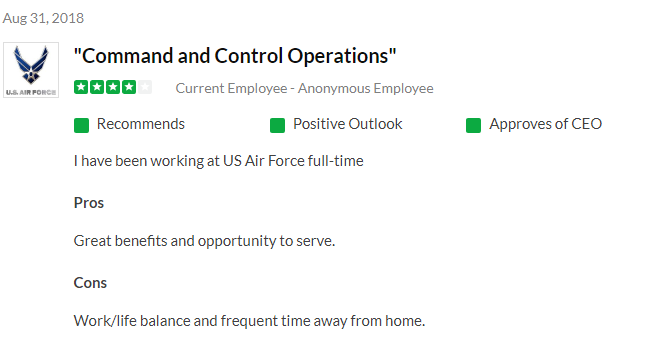 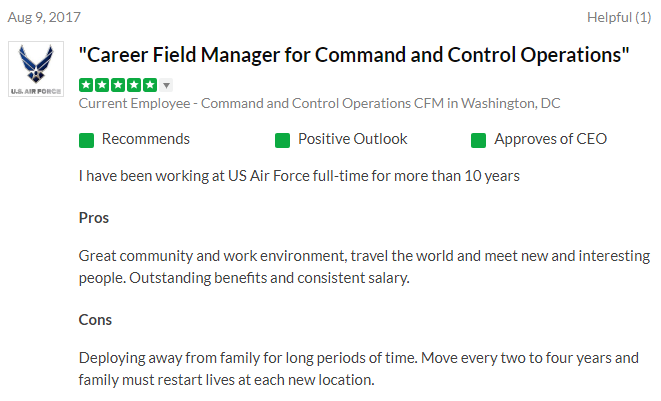 There are more civilian jobs that can use the skills that a trained Command and Control Operations Specialist has learned during their time in the Air Force.

Many of these jobs offer decent starting pay and if government-related they will count time in service towards pay, vacation, and retirement benefits.

Examples of these include:

Having a valid Top Security clearance can also lead to very good employment opportunities with companies that do contract work for the government.