What is an MP?
Mission #1: Combat Support
Mission #2: Law Enforcement
Who Should Become an MP?
Requirements to become an MP
Military Police Training
Example of Life as a National Guard MP
Civilian Career Opportunities

What is an National Guard MP?

Military Police Soldiers are different from every other MOS because, as an MP, you have a dual mission: combat support in deployment zones and Law Enforcement on the home front.

MP’s wear many different hats across the many missions that might be assigned.

As a National Guard Military Police (MOS 31b), the missions vary even greater due to the variations in the different units across the States.

One unit may be a Quick Reaction Force, standing at the ready to assist civilian law enforcement in the event of rioting.

Another unit may be attached to an Engineering Battalion and only trains to provide convoy security in the event of a deployment.

Military Police Soldiers fill many roles across many missions.

Although the range of missions is incredibly broad, they can be broken down into two categories:

In the event of a deployment, National Guard Military Police Soldiers must fill many shoes.

Each area has its own needs and no two units will have the same experience.

Some combat support Mission examples are:

In a combat environment, MP’s are totally flexible. The missions listed above are examples and every deployment as an MP will be different than the other.

Enforcing laws and regulations on a domestic base is extremely important in keeping the troops on the home front safe, and while the National Guard may not patrol on a regular basis, any base may call upon an MP National Guard unit to fill in empty spots.

A Quick Reaction Force, or QRF, is a role assigned to a unit that can respond to an emergency within hours. A QRF may be the first boots on the ground in the event of a disaster.

If civilian law enforcement expects trouble such as rioting, a QRF may be put on standby to respond if the need arises.

Those called to fulfill law enforcement duties on a base will conduct typical policing duties, such as arresting and charging criminal suspects, crime scene preservation, and dealing with the public.

An MP in this role will respond to all emergencies, control traffic, and work to prevent crime.

Who Should Become an National Guard MP?

Enlisting as a military policeman is a big decision and should not be taken lightly.

Some things that you may consider before you enlist are:

Requirements Prior to Enlisting

Becoming a Military Police Soldier is no easy task and will require dedication.

Before you ever enlist as an MP, you will need to take the ASVAB test, pass a physical examination to determine your fitness to be an MP, and qualify for a secret security clearance.

The Armed Services Vocational Aptitude Battery (ASVAB) is a series of tests that will help determine the MOS’s available to you.

Taking the ASVAB will give you a general idea of where you stand against your peers, what jobs you may want, and what jobs are available.

Everyone must take this test prior to enlisting. To be eligible for a Military Police job, you must score a 91 on the Skill Technical section of the test.

Shortly after you enlist, you will go to MEPS, a lengthy medical exam to determine your fitness for the Army.

You will be given a variety of tests on your joints, hearing, eyesight, and blood.

This medical exam is extremely important, as being an MP has a minimum standard in each area.

Access to this information is limited and you must be eligible for a secret security clearance before you are able to enlist.

It will include a lengthy questionnaire and an interview that will explore your background, finances, and character.

Once you pass these initial steps and raise your right hand to enlist in the Army, you’ll be sent to the actual training and begin the journey to becoming an MP.

To become an MP, you’ll go through 20 weeks of One Station Unit Training, commonly referred to as OSUT training.

OSUT is unique in the fact that for the entire 20 weeks, you will be at the same unit with the same Drill Sergeants and fellow soldiers.

Related Article: Does The National Guard Pay For College? Absolutely!

Typically, in other MOS’s, Basic Training will be conducted in one unit and Advanced Training would take place elsewhere with another unit.

Throughout the 20 weeks at Fort Leonard Wood, Missouri, you will learn the skills of the trade, including:

Training will take place both in the classroom and in the field.

You’ll learn about both missions of an MP: the law enforcement on the home front and the combat support role in the event of a deployment.

An Example of Life as a National Guard MP

To showcase an example of a National Guard MP, I’ll detail my experience so far. I enlisted in 2017 in May and went to training in September.

My training lasted until March. I won’t go too much into detail about this part as I could write a whole book about it, but I’ll say this: it definitely sucked, but it was something that I’m very thankful that I did.

After graduation, I went to my unit in middle Tennessee which was a medium-sized MP company that was attached to an Engineering Battalion.

On drill weekends, we would train in our combat support mission: convoy security, crew-served weapons, and other field operations.

We work with our HMMWV’s every drill and incorporate them into as many training exercises that we can.

Since my unit is focusing on the combat support role, I have completed almost no training for the law enforcement mission that MP’s also have.

However, a friend of mine that I graduated MP school with was assigned to a unit that focused on law enforcement, and the exact opposite is true for his unit: they train exclusively for law enforcement and focus nothing on combat skills.

Overall, the unit you are assigned to as an MP will determine which area you focus in.

My unit focuses on convoy operations because we are attached to an Engineering Battalion.

Determining exactly what you’ll be doing at your unit before you arrive is almost impossible because of the broad range of jobs of a National Guard MP.

Despite the differences between the Army and civilian law, many of the skills taught in MP school transfer over to a civilian law enforcement career.

The ability to deal with stressful situations, handle the public, and detain subjects is constant in both the job as an Army MP and a civilian police officer.

These skills are vital in both fields and having formal training as an MP puts you a leg up over other candidates.

Becoming an MP is a hard journey, but worth every step.

If you believe that you may want to take this challenge head-on and do one of the most rewarding jobs in the Army, contact your local recruiter to receive more information. 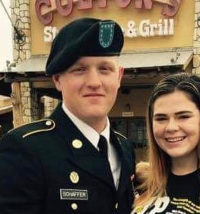 Gage S.
Gage is a Tennessee National Guard MP that enjoys being a Freelance Writer in his down time. He writes about a variety of subjects such as fitness, dieting, military topics, and video game journalism.