Studies have shown that SARMs have many practical uses, as a male contraceptive, a wound-healing agent, and potential for anemia and osteoporosis treatment.1

There are several different types of SARMs. Although Ibutamoren, commonly known as MK-677 (Ibutamoren), is typically sold next to and grouped with SARMs, it’s technically not a SARM.

This article will review, in detail, MK-677, which has become a popular muscle-building compound among athletes and bodybuilders because it can significantly increase lean body mass.

Also, if you’re planning on joining the military, cease using this (and really any) supplement at least a couple months before going to MEPS.

They can cause a false positive on a drug test, and will affect your chances of joining! 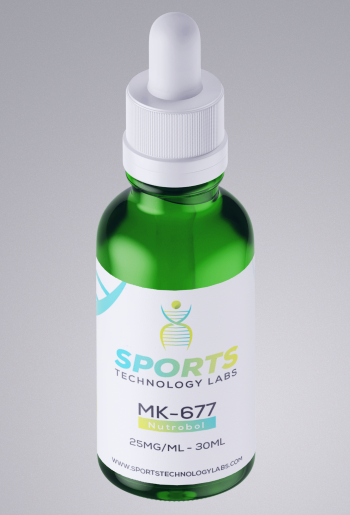 Ibutamoren is an incredibly potent and effective unique compound that mimics the ghrelin receptor, which is involved in releasing growth hormones (GH), fat accumulation, energy expenditure, and appetite regulation.

MK-677 boosts GH and IGF1 (insulin-like growth factor 1), both of which play a major part in muscle growth, cell regeneration, and recovery.

As a result of these benefits, athletes widely use Ibutamoren, particularly bodybuilders, to maximize their performance.

Research has shown that long-term Ibutamoren use improves bone mineral density and muscle mass while increasing training levels and performance.2

In addition to muscle strengthening and increased bone density, MK-677 can help users recover faster and improve their sleep quality.

The complete list of reported benefits of Ibutamoren (MK-677) is as follows:

In the following section, we will examine some of the more detailed benefits of MK-677.

MK-677 alleviates muscle wasting due to a lack of protein in your diet, which is why it is often considered effective in treating individuals with catabolic conditions.

Obese and older populations and women experiencing menopause typically experience health issues resulting from lowered bone mineral density, so they can all benefit from MK-677.

GH levels decline as we get older, which is why aging populations benefit from MK 677 by improving overall hormone profiles and giving GH levels a boost.

The below video also does a really good job at describing the benefits of MK-677, and SARMS in general:

While even the smallest dose of Ibutamoren will increase GH levels, muscle growth, and sleep quality, the typical amount is 25mg a day.

However, the more MK-677 you take, the better the result.

Research has shown that beginner doses of 10mg compared to 50mg a day have little difference in GH production.3

However, a significant increase in IGF-1 levels was reported.

That said, for anyone looking to increase GH levels, beginner/immediate dosage levels of MK-677 are sufficient.

What the Research Says About MK-677

There is ample research available to back up claims about the benefits of MK-677.

One such study, which “tracked body composition and clinical outcomes in healthy older adults” given MK-677, found GH level increase and increased rejuvenation over 12 months.2

Another study indicated that Ibutamoren is well-tolerated and that there have been no attributable adverse effects.5

However, the same study concluded that “MK-677 had an unfavorable safety profile in individuals with congestive heart failure.”

MK-677 is thought by some to have anti-aging effects.

It has shown positive results in treating metabolic diseases, along with all of the other proven benefits of increasing GH levels.6

“MK is very mild, if even that. I take 12.5mg every night. And on rare occasion I’ll take a month off. Noticed better sleep, better skin and nails/hair grows quicker. I’ve done the typical 25mg daily too when I first started and it can seriously help with bulking, I take it at night to avoid the hunger.”
– CGW77 in r/sarmsourcetalk (Reddit)

“mk677 works really great for me, even just alone.”
– ChocolateRoofie69 in r/sarmssourcetalk (Reddit)

“It also keeps you in a positive nitrogen balance and helps preserve muscle when cutting.”
– HalfSquidHalfMan in r/sarmssourcetalk (Reddit)

“MK-677 was only denied by big pharma because they already had/have true, real HGH that is injectable. MK-677 is not just an HGH releaser it is also a very potent IGF-1 releaser. It is very anabolic, safe even in PCT, women and men can both take it (it is NOT a sex hormone) and it gives incredible brain healing.”
– king_curious in r/sarmsourcetalk (Reddit)

“I find it to be good for repair if you have a nagging injury.”
– muadhnate in r/sarmssourcetalk (Reddit)

“Very useful if you have problems eating or sleeping. Boosts sleep quality and hunger massively.”
– 200wfridge in r/sarmssourcetalk (Reddit)

“It’s a waste of time. Only made me bloated and hungry if I didn’t take it before bed. The water bloat was bad enough that even my shoes started feeling tight. Not to mention all the crap with the blood sugar. Sleep isn’t that great either.”
– BigManeMoney in r/sarmsourcetalk (Reddit)

“At 10 to 15mg, taken before bed, you should get the GH benefits without the excess hunger.”
– Fancy-Category in r/sarmsourcetalk (Reddit)

“I’m doing a stack of Rad and Mk-677 and have had some pretty nice results. Definitely do recommend taking at night because I have gotten too hungry during the day. Plus it helps with my insomnia and my shoulder pains that I used to have since I dislocated it.”
– SameKey2 in r/sarmsourcetalk (Reddit)

Research has shown that MK-677, including long-term use, is well-tolerated and does not cause serious side effects.5

However, specific populations may experience certain side effects.

For example, anyone who has Diabetes or who is insulin sensitive may find that using MK-677 may exacerbate the symptoms commonly associated with such conditions.

When taking any compound to increase muscle mass, you must adhere to the correct usage and dosage requirements.

Most reported MK-677 side effects come from extended use or improper dosage.

Some of the reported common side effects related to Ibutamoren use are typically associated with unnaturally high GH levels and is usually the result of using too much MK-677 too often, can include:

Water retention is probably the most common of all side effects related to increased levels of HGH, which makes MK-677 more suited for bulking, according to some users, than cutting.

However, MK-677 side effects are minimal and often not noticeable, especially when compared with the benefits achieved from using the compound.

Stacking MK-677 With Other SARMS

It is not uncommon to stack MK-677 with SARMS, whether bulking or cutting.

Depending on your goals, you might stack MK-677, known for its unparalleled bulking capabilities, with SARMs like S4 and Ligandrol (LGD-4033) for maximum bulking in a shorter period.

This next section will discuss MK-677 stacking for bulking and cutting.

When you stack MK-677 with other SARMs for bulking, you can expect the following results:

Common stacks for bulking are as follows: 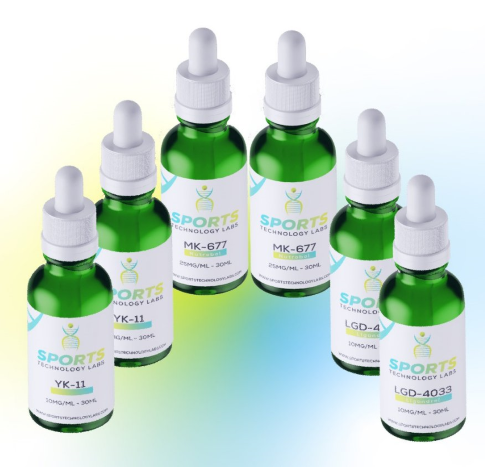 YK-11 and LGD-4033 unlike MK-677, are actual SARMs, so they feature more steroid-like properties and behave much like testosterone.

Since HGH and testosterone are anabolic, the combination of the 3 is optimal for anyone looking to improve body composition.

Many people take them together for the HGH fat loss and anti-aging properties and the testosterone’s muscle-building capabilities.

The best way to combine the 3 is through an eight to ten-week cycle, which should look something like this:

After eight to ten weeks, take a four-week break before beginning another cycle. Post-cycle therapy (PCT) is not necessary for cycles under 12 weeks. 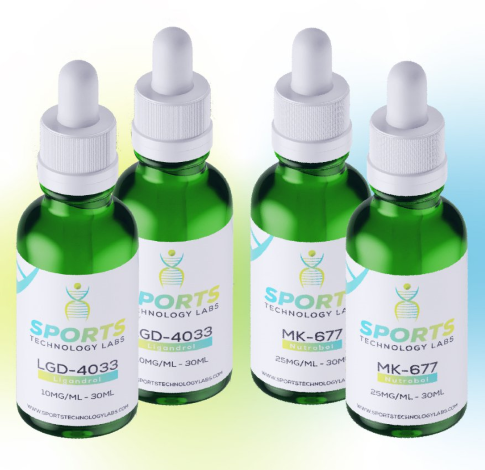 This is another great stack for those looking to not only bulk up, but also get serious gains in size and strength.

As you’ll see, it’s virtually the same as the Advanced mass stack above, with the notable absence of YK-11.

Ligandrol is a great SARM that has several key benefits, including:

Since MK-677 works well as a GH secretagogue, you can expect some serious increases in your HGH levels.

When combined with Ligandrol, not only will you see increased progress in your overall lifts, but you’ll also get the size and strength to go along with it.

When you stack MK-677 with other SARMs for cutting, you can expect the following results:

Common stacks are as follows: 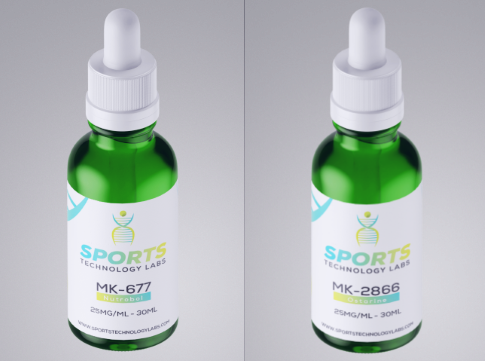 MK-677 is very effective when used with Ostarine. With this combination, your body will automatically block new fat reserve storage.

A typical MK-677 stack integrates MK 2866 (Ostarine) and will look something like this:

Although MK-677 is best for bulking stacks, it is also used to retain lean muscle mass while cutting due to its ability to increase GH levels, as outlined in the above stack.

Pick it up on the Sports Technology Labs website here.

When purchasing MK-677, we recommend the MK-677 over on www.SportsTechnologyLabs.com.

The Sports Technology Labs brand of MK-677 is the most powerful on the market, and it will take your muscle growth to new heights.

It offers all of the accelerated recovery and performance enhancement that you read about above, and it’s 3rd party tested so you know you’re getting the real deal.

The Sports Technology Labs brand is very well-known and respected in the bodybuilding world, and is the go-to source when it comes to SARMS.

Check out their page on MK-677 here: www.SportsTechnologyLabs.com

That makes it a tremendous bulking compound to increase muscle mass more quickly.

It has several different positive health benefits, too, particularly for individuals suffering from lowered bone density, anyone who has insomnia, and those individuals with catabolic issues.

MK-677 has also proven beneficial to elderly populations, those who struggle with obesity, and others.

It is, however, most commonly used, particularly stacked with other SARMs, by athletes and bodybuilders, in particular, to burn fat, gain muscle, and enhance overall performance.

Best Supplements To Get You Ripped Fast

Learn more about MK-677, or Ibutamoren, including what it is, what the benefits are, how you're supposed to take it, what results you can expect, and more.