The Boatswain’s Mate (BM) is the lifeblood of the United States Navy.

Without BMs, a ship cannot get underway, cannot stay underway, and certainly cannot dock in port.

Boatswain’s Mate is the oldest rate in the Navy.  Its origins can be traced back to the 1775 Continental Navy, the Revolutionary War, and John Paul Jones.

Yeoman, Quartermasters, and Gunner’s Mates may argue this point, but they would be wrong.  Even the Navy’s cool.navy.mil BM rating page begins “Boatswain’s Mate, the oldest rate in the Navy, has a rich history of honored traditions…”

The Naval Act of 1794, often referred to as the “Act to provide a Naval Armament” officially established the BM rate.

The BM is an expert in all things related to marlinspike, boat seamanship, and upkeep of the ship’s external structure including scraping, priming, and painting.

There are approximately 4,800 BMs serving in the US Navy today.

The Boatswain in Boatswain’s Mate is often pronounced as bosun or Bos’n.

To become a Navy BM, there are specific requirements and qualifications that you must meet:

Prior to becoming a Navy Boatswain’s Mate, you must first become a US Navy Sailor. Recruits accomplish this via successful completion of Navy Recruit Training, commonly referred to as Boot Camp.

Located at Naval Station Great Lakes in North Chicago, Illinois in Lake County. RTC Great Lakes is commonly referred to as “The Quarterdeck of the Navy.”

Boot Camp is eight weeks long. During these eight weeks, the Navy teaches future seaman, airman, and fireman the basic skills required of all US Sailors.

In addition, The Navy provides online training to qualified Navy BMs through their Credentialing Opportunities On-Line website, referred to as Navy COOL.

However, many BMs do not attend BM “A” school.  These individuals are referred to as undesignated seaman.  They are also referred to as PACT (Professional Apprenticeship Career Track) seaman.

These PACT seamen qualify for the BM rate through on-the-job training.

In addition to many seamen, some firemen and airmen also join the Navy as undesignated sailors.

The PACT program allows sailors to choose a specific track to narrow their naval career choice to an Aviation, Engineering, or Surface rate.  In addition to BM, there are a number of other rates that are eligible to PACT seamen, airmen, and fireman.

Additional training is available to Boatswain’s Mates as their Navy career progresses.

How Much Are Boatswain’s Mates Paid?

Like all other enlisted personnel (in all branches), the Navy bases a sailor’s pay on their rank and length of service.  BMs are no different.

A Boatswains Mate is responsible for deck handling machinery and equipment, maintaining the exterior surfaces of ships, cargo-handling, and small boats operations.

As there’s never a shortage of work aboard ship in the Deck Department, the duties of a BM are numerous and varied.  They include:

The job of a Navy BM is physical and demanding work, mostly performed outside in all weather conditions.  Training and supervising younger green, untrained sailors requires a lot of patience and the day-to-day duties of being a deckhand can oftentimes be monotonous.

Sailors in specific jobs (or rates as the Navy refers to them) must adhere to a Sea/Shore rotation based on their rate.

The Boatswain’s Mate rate is one of the most sea-intensive rates in the US Navy.

During a twenty-year career in the Navy, BMs will spend about 65 percent of their career at sea, and 35 percent assigned to shore stations.

Specifically, the Sea/Shore Rotation for a BM is:

Shipboard life and life on shore duty are drastically different.  The Navy expects Boatswain’s Mates, as they do all their sailors, to adapt and meet the challenges presented by these different environments.

Here are a few reviews featured on indeed.com from ex- and current Navy BMs: 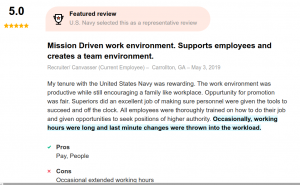 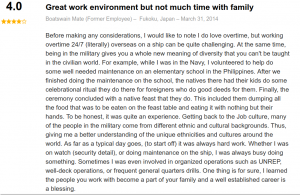 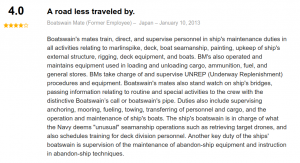 Navy Boatswain’s Mates enjoy the same benefits as all Navy personnel does, such as the opportunity to travel the world, unlimited opportunities for learning and advancement, and control over their career to some degree.

BMs should not be confused with Aviation Boatswain’s Mates (AB).

There are three types of ABs in the US Navy:

ABE Class “A” Technical School is in Pensacola, Florida and is five weeks long.

The Pensacola, Florida-based ABF Class “A” Technical School is six weeks in duration.

ABH Class “A” Technical School in Pensacola, Florida is four weeks in duration.

ABEs, ABFs, and ABHs normally work outdoors on the deck of aircraft carriers in all types of weather.  The work is fast-paced and often in potentially hazardous environments.

Sea/Shore Rotation for ABs is almost identical to that for BMs.

All sailors should take full advantage of on-the-job (OJT) training opportunities, and educational opportunities offered and afforded them during their naval service.

According to cool.navy.mil, these apprenticeships include:

If you are considering the US Navy, not allergic to hard work, and are seeking adventure, a career as a Navy BM, or AB might just be for you.

Having served alongside BMs aboard the USS Mount Whitney (LCC-20) in the late eighties and early nineties, some of my favorite friends and best shipmates were BMs.  They worked hard, all day, every day.  They played hard too.  There is no more “salt of the earth” rate in the Navy than a Boatswain’s Mate.

I have a tremendous amount of respect and admiration for BMs.  They take pride in what they do, and what they do, they do very well.

Boatswain’s Mate is a hard job and not always appreciated.  But BM’s make the Navy happen.

I stated earlier that the BM is the lifeblood of the Navy.  They are.  However, they are also the backbone of our fleet.

What is a Boatswains Mate?

Also known as a BM, Boatswains mate's are the lifeblood of the US Navy. They are experts in all things Marlinspike, seamanship, and ship upkeep.

Where is their A School conducted?

Navy BM's A school is located at Great Lakes, IL.

How much are they paid?

An average Boatswains Mate with a rank of E-3 would make $2,195 per month.

How many are there?

While there are no official tally's, it's thought that there are close to 1,500+ boatswains mate's in the Navy.