These Navy Special Forces Operators are what is known as Special Warfare Combatant Craft Crewmen (SWCC).

They are experts at carrying out shoreline and inter-coastal special operations tasks.

Their watercraft are small and fast and carry a large amount of extremely lethal firepower.

You definitely would not want to run into them on a remote beachhead or riverbank if you have hostile intentions.

Special Warfare Combatant Craft Crewmen are skilled at inserting other special operations forces by water and then extracting them back out safely after their missions have been completed.

It’s a Navy specialty that requires you to be in excellent physical condition, a fast thinker, and have a vast amount of intestinal fortitude when the going gets tough.

This is what it takes to fulfill their motto of ‘”On Time, On Target, Never Quit!’

Here is a YouTube video that shows more of what Special Warfare Combatant Craft Crewmen do:

SWCC Special Forces can trace their roots back all the way to WWII.

Their role was further expanded during the Vietnam War in an effort to interdict the supply lines that the Viet Cong were using rivers for.

They also played key roles in supporting Navy SEAL missions during the Vietnam War too.

Their craft SWCC operators used had evolved during the Vietnam War from larger PT Boats to smaller and faster ‘swift boats.’

These boats more closely resemble the craft that are currently being used by Special Warfare Combatant Craft Crewmen at the present time.

Over the next few decades, these navy specialists became part of what would be called SBU’s (special boat units).

They have been tasked with such prominent roles as operating MK III patrol boats to help protect Kuwaiti Tankers from Iranian attacks during operation Earnest Will to securing oil drilling platforms in the Persian Gulf when Saddam Hussein was intent on blowing them all up during Operation Desert Shield.

Although the official Navy job title of Special Warfare Combatant Craft Crewmen was not born until April of 1994, these elite Navy small craft operators already had established a long and storied history.

To become a Special Warfare Combatant Craft Crewmen, one has to be extremely physically and mentally fit to serve.

Here are the requirements that one must meet in order to qualify and enter into the SWCC training pipeline. 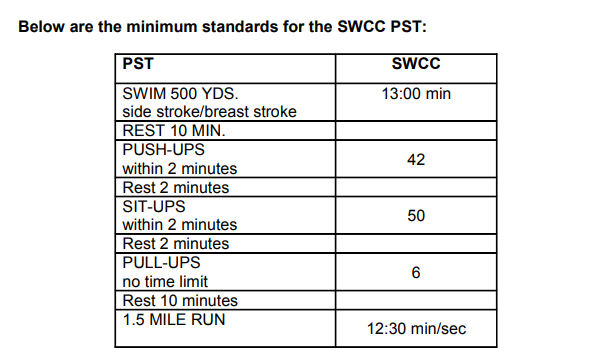 These are the training stages that a new recruit must conquer in order to earn the title of Special Warfare Combatant Craft Crewmen.

This training stage has one purpose only and that’s to see if a new recruit is worthy to go on to further SWCC training.

It prepares the recruit physically and mentally for the extreme demands that will be placed on them as they go through further SWCC training.

It ends with a pass/fail physical fitness test that each recruit must pass or they will no longer be considered for further SWCC pipeline training.

This is a training course designed to further acclimate a new SWCC recruit into the Special Forces lifestyle.

Recruits will go through further physical training, learn Navy Special Forces history, and learn what will be expected of them as they progress through the SWCC training pipeline.

This is when training gets really physically and mentally exhausting.

It is also designed to be the team-building phase of SWCC training.

During these 5 weeks, every recruit will be pushed to their mental and physical limits.

The last few days of this course are what is known as “The Tour”. It’s a three-day period during where recruits apply the skills, teamwork, and mental toughness they have gained under various weather conditions and with limited sleep.

Although the extremely physical and mental part of SWCC is now over, recruits will still be pushed hard physically and mentally every day during this phase of training too.

The main emphasis of this stage of training is core tactical knowledge and then learning how to apply those skills in the field.

Although the training for both of these Navy Special Forces jobs is similar, their missions are completely different.

Navy SEALS do not generally operate the small fast craft that takes them on and off the shore.

They also are tasked with going much further inland than SWCC operators do.

They also do not carry or use the firepower that is on SWCC combat crafts.

Navy SEALS are also deployed via submersibles and aircraft as much as they are by small fast craft; although SWCC boats are occasionally dropped by air, this is not done nearly as much as with navy SEALS and they are not trained for submersible insertions.

Special Warfare Combatant Craft Crewmen are not like other Special Forces troops that carry all of their tactical gear on them when they go on missions.

They rely on the weapons that are embedded into the various fast attack watercraft that they use.

The amount of lethal firepower that can be laid down by SWCC combat craft is amazing, to say the least.

These powerful weapons consist of:

Some of the heavily armed watercraft that SWCC operators use includes:

Here is a video that shows some of these weapons and specially designed watercraft in action.

Without a doubt, these Navy Special Forces troops deserve a lot more credit for what they do than they receive.

They are very versatile Special Forces Operators that can quickly be tasked with successfully completing many navy onshore and inshore missions.

They can handle the watercraft they use and the weapons mounted on those vessels extremely proficiently.

SWCC operators can act covertly when necessary or meet an enemy head-on in the open with a vast array of firepower.

They are also experts at inserting and extracting other Special Forces troops including those of other branches of the military.

SWCC operators will continue to play a vital role in Navy Operations well into the future.