Navy Religious Program Specialists (RP) primarily assist Navy Chaplains in the performance of the chaplain’s duties, but also support the Chaplains in developing and supporting programs designated to help meet the needs of US Marines, Sailors,

2019 marked a rather special year for US Navy sailors who serve as Religious Program Specialists (RP).

The rating turned forty that year.  The journey of the RP rating (like the journey of most 40-year-olds) was full of twists and turns. During World War II, the Navy adopted the Specialist “W” (Welfare) rating to assist Navy Chaplains during the war, addressing their special needs.  These duties included playing piano and organ during worship services, act as musical directors, and perform clerical duties.

Although, just like today’s RPs, the WWII Specialists “W”s did not serve as religious leaders during the war, though served anywhere under any conditions, including the battlefield.

In 1942, W. Everett Hendricks was the first sailor to enlist in the Navy as a Specialist “W”.  Serving at Naval Training Station (NTC) Great Lakes, Illinois, the talented choir director and musician contributed significantly to the celebrated Great Lakes Bluejacket Choir.

The Navy discontinued the Specialist “W” rating after the war in 1945.

However, having realized the contribution that Special “W”s provided during the conflict, the Navy saw the value in providing Navy Chaplain’s with an assistant.  Realizing this, the Navy used  qualified sailors from the Yeoman (YN) and Personnelman (PN) ratings to provide this support.

Finally, in 1979, the Navy officially established the Religious Program Specialist rating.  There were several conditions that these pioneers had to meet, the most important and taxing of these was the willingness to serve as a combatant with the US Marine Corps.

As Navy Chaplains are non-combatants, however, they require protection during times of conflict, which is why RPs receive combat training from the USMC in Camp Lejeune, North Carolina, to this very day.

In the early 2000s, the Navy considered merging RPs back into the YN rate, along with Legalman (LN) and Cryptologic Technician Administration (CTA,) in their reduction-in-force (RIF) efforts, but abandoned the notion rather quickly when they realized the importance of the roles RPs served, particularly with the Marine Corps.

Navy RPs do not require ordination, do not act as religious leaders, nor do they provide pastoral or religious counseling to Marines, Sailors, or their families.

Adherence to religion is not a requirement to be an RP, with some agnostic and atheist members serving as Religious Program Specialists.

To serve as Navy Religious Program Specialist (RP) in the United States Navy, you must meet certain requirements:

What’s Life Like for a Religious Program Specialists (RP)?

Navy Chaplains rely on Religious Program Specialists to assist them in developing programs to meet the needs of Navy, Coast Guard, and Marine personnel and their families.

They also are responsible for the facilitation of the free exercise of religion for all Sea Service Personnel, serve as part of the Religious Ministry Team (RMT), and advise leadership on ethical decision-making, cross-cultural awareness, and conflict resolution.

The day-to-day duties and activities of an RP include:

RPs literally work anywhere and everywhere.  As they serve all the US Sea Services, they work not only with the Navy, but the Coast Guard, too.  Religious Program Specialists deploy to the fleet. hospitals, the battlefield, and ashore.

Be sure that wherever there is a Navy Chaplain, an RP is nearby.

The Navy defines the RP rating as a “Balanced Rating” CWAY category.  What this means is that the Sea/Shore Rotation for Religious Program Specialists (RP) is about 50 percent ashore and 50 percent assigned to the fleet over the course of a 20-year career.

How Much Are Religious Program Specialists (RP) Paid?

Like all the other branches of the Armed Services, the Navy bases a sailor’s pay on their rank and length of service.

While currently manned at 101 percent, the Navy (COOL) website maintains that self-motivated and qualified people have a good opportunity for entry into the RP rating.

Reviews on the career website indeed.com by former and current RPs are many and positive albeit difficult. One reviewing RP who served four combat deployment with the Marines in Iraq called it, “Rewarding.  One of the hardest jobs that I have done.” 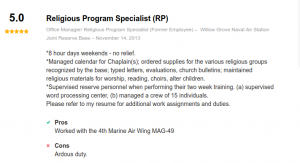 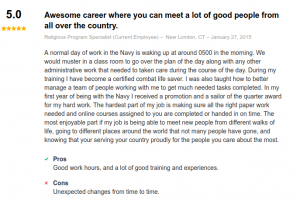 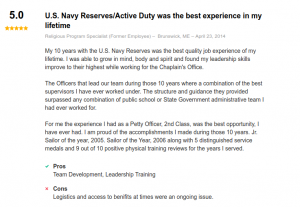 The Department of the Navy’s Credentialing Opportunities Online (COOL) website estimates there are only about 400 sailors serving as Religious Program Specialists in today’s Navy.

The Navy COOL Summary For Religious Program Specialist (RP) lists close to three pages of possible civilian job opportunities post-Navy.  A few of these include:

Like all sailors, RPs should take full advantage of the on-the-job (OJT), training opportunities, and educational opportunities offered and afforded them during their naval service.

Several national certifications and state licenses are obtainable by RPs.

Young people are of high moral character, tolerant of other’s religions, undaunted by the prospect of duty in combat situations, and realize that RP duties are often performed in the evenings, on the weekend, and on holidays should give the RP rating consideration if they are interested in serving in the US Navy.  A genuine interest in people and a compassionate, empathetic disposition are common traits in Navy RPs.

What could be better than not only serving your country, seeing the world, and helping your fellow Sailor, Marine, and their families?