Over the years the Air Force has integrated more and more computers into its system to help it accomplish its mission.

The types of computers the Air Force uses and the networks that they operate on have gotten more sophisticated over time too.

That’s why the Air Force is so dependent on those IT Technicians that help keep Air Force computers, software, networks, and associated support equipment up and running.

This is the important job that Air Force Client Systems Technicians do.

They not only must have a good computer background in order to do this job, but they also must have good mechanical aptitude.

Air Force Client Systems Technicians must perform such tasks as installing software and diagnosing and then making computer and support equipment repairs.

It’s an Air Force job that must follow strict security protocols and it also requires excellent attention to detail.

This Air Force job is not for everyone, but those that choose to do it find it very rewarding and will have no problem finding equivalent civilian employment once their time in the Air Force has come to an end.

Here is a YouTube video where an Air Force member better describes their duties as an Air Force Client Systems Technician.

Here are the minimum requirements that it takes to enter training to become a Client Systems Technician.

• Minimum ASVAB Score of 60 in the Electrical category

• Be between the ages of 17 and 39
• Possess a GED or high school diploma
• Have normal color vision and depth perception
• Be able to lift 50 lbs.
• Some prior IT experience is recommended but not required
• Qualification to operate government vehicles according to AFI 24-301
• Successful completion of 8.5 weeks of Air Force Basic Military Training held at Joint Base Lackland in San Antonio, TX (Not required of those with prior military experience or training)
• Completion of a current Single Scope Background Investigation (SSBI) that leads to the ability of an Airman being granted access to Secret or higher-level material

Here is the on the job and technical training that is required in order to be able to handle the duties that are required of an Air Force Client Systems Technician.

The Air Force technical training school to become a Client Systems Technician is held at Keesler Air Force Base which is located just outside Biloxi, Mississippi.

During this training, the recruit will learn the basics of what it takes to be a Client Systems Technician.

The school will familiarize them with all the types of computers, networks, and support equipment that fall under their area of responsibility.

The tasks the recruit will learn include installing, maintaining, troubleshooting, repairing, and analyzing the performance of computers and their related support equipment such as printers and fax machines.

They will also have to learn to do these same tasks mentioned above on a variety of different voice communication systems and other cryptographic client devices.

The new Air Force Client Systems Technician will also learn the difference between working in fixed and field-deployed environments.

Technical training will also introduce them to Air Force computer and voice systems security protocols and introduce the recruit to the forms and other paperwork they will regularly be working with.

On the Job Training For 3D1X1’s

As with most Air Force jobs, the most important learning by a recruit will be the hands-on training that they get at their first permanent duty station.

This training will focus on the specific networks, databases, computers, and support equipment that the recruit will be in charge of maintaining, installing, troubleshooting, and repairing.

Overseeing this on the job training will be an NCO that has many years’ experience working as an Air Force Client Systems Technician.

How Much Are Client Systems Technicians (3D1X1) Paid?

Those who come into the Air Force with no experience in their chosen career field will generally always start out at the rank of Airman Basic (E-1).

Recruits that have some IT training or other applicable skills or schooling may be placed in the ranks of Airman (E-2) or Airman First Class (E-3) depending on the level of that experience.

All Air Force enlisted members are paid by a combination of rank and time in service.

The current enlisted pay chart for the Air Force is as follows:

Other forms of Air Force pay and incentives may include such things as:

What’s Life Like as an Air Force Client Systems Technician?

Here are some of the duties that Client Systems personnel are expected to perform:

• Client Systems Technicians are expected to perform a wide variety of Air Force Information Technology support functions
• They are responsible for maintaining, installing, troubleshooting, and repairing computer systems, networks, support equipment, printers, voice communication systems, and cryptographic devices
• Follow up on client system work tickets to make sure reported problems have been corrected
• Develop, plan, and install base communication systems
• Plans and schedules client system installation and maintenance activities
• Reports and corrects any security incidents with the equipment that is under their sphere of responsibility
• Repair, replace, and remove client system components that are not functioning properly or have become unnecessary

This is the type of Air Force job that comes with many different possibilities as far as work environments go.

The Airman could be assigned to a unit that operates in a comfortable office type environment or can be field deployed.

There is also the chance for somewhat frequent temporary duty assignments.

One can reasonably expect to travel to several different areas of a base to do their job also.

That’s the reason that those that enter this career field must be able to qualify for a military driver’s license.

When stationed at stateside Air Force bases or bigger bases overseas this is a good Air Force job to have if you are married and have a family.

Here is what some former Air Force Client Systems Technicians had to say about their military job experience in some reviews found on the website glassdoor.com: 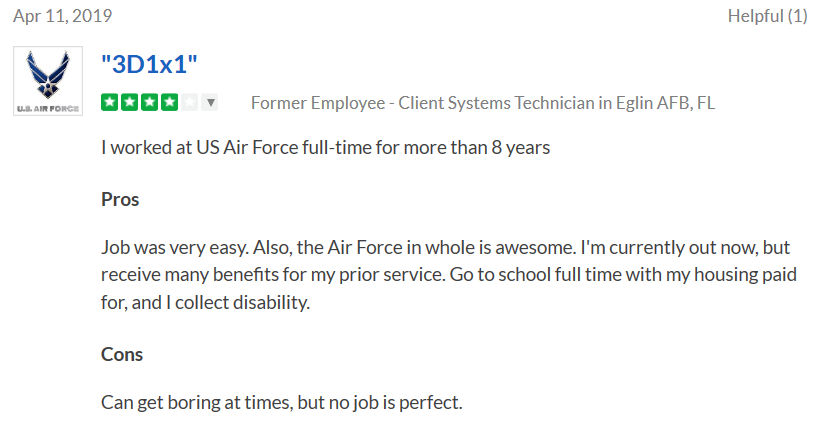 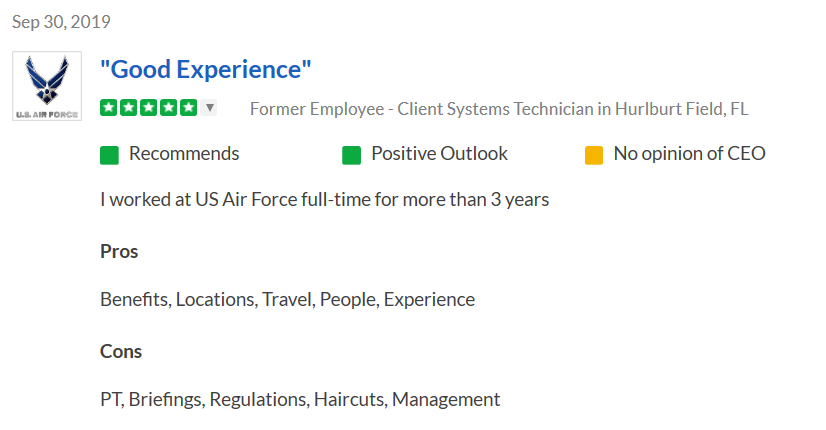 The world runs on computers and communication equipment these days.

That means any former Air Force Client Systems Technician with a good military record can find a job just about anywhere.

Those who find government client systems jobs will even have their military time count towards pay, vacation, and retirement.

Here is a list of job positions that former Air Force Client Systems Technicians are usually qualified to fill: