United Airlines is one of the biggest airlines in the country.

The airline services seven primary hubs in the United States, with the most prominent at Chicago-O’Hare Airport.

A founding member of the Star Alliance, United Airlines not only has a large domestic presence in the U.S. but also services the Asia-Pacific region of the world.

Can you find a United Airlines military discount online or at the airport?

Yes! United Airlines is proud to support active duty U.S. troops by offering up to 5% off your airfare. You do need to become a member of Veterans Advantage in order to receive the special offer.

United Airlines would like to extend its appreciation to members of the U.S. Armed Forces by providing a number of different ways to save on your next travel destination.

The United Airlines military discount on airfare is available to active duty military, as well as veterans. Service members can save up to 5% off airfare by taking advantage of the Veterans Advantage promo offer.

The discount is applicable to standard United Airlines flights as well as United Express.

Related Article: 14 Airlines That Offer A Military Discount (and 12 that don’t)

United Airlines also features ways for military personnel to save on baggage in addition to discounted airfare.

The special military offer does exclude military pet shipments.  Military veterans are also not entitled to the baggage benefit.

You can learn more information about the promo by visiting the Baggage rules and optional services page.

Are you an animal lover? If so, you will be happy to learn that United Airlines can usually makes accommodations for your fury friends!

Under normal circumstances, United Airlines gives active duty military on Permanent Change of Station (PCS) and their spouses, as well as State Department Foreign Service Personnel (FSP), the ability to transport dogs and cats while traveling on assignment to and from international destinations at no extra cost.

You can learn more about the special offer for military and government employees by visiting the Military and State Department page.

We’ll do our best to update this page when United Airlines reinstates their pet reservations.

United Airlines would like to invite active duty service members in uniform, or with present leave orders, to join the United Club lounge at participating airports.

The exclusive club features a VIP lounge where you can kick back and relax before the departure of your flight. Family members traveling with you can also get access.

United asks that you present a military ID with your boarding pass in order to gain access.

The 5% off on United Airlines flights is only available through Veterans Advantage.

In order to receive the discount you will need to become a member, which does cost money.

Plans start at under $5 for the first 30 days and then between $5 to $10 p/ month depending on the payment plan.

Veterans Advantage gets you access to thousands of exclusive offers from countless brands.

According to Veterans Advantage, the flight must depart from the U.S. or Canada in order to receive 5% off airfare.

Additionally, it only applies to trips within the United States, Canada Mexico, Central America, Europe, and the Caribbean.

Reservations are limited to fewer than eight people.

The military discount is applied to the base fare and does not include government-imposed taxes, fees, or carrier surcharges.

How to Earn 5% Off United Flights

It only takes a few steps to receive a military discount on United Airline flights: 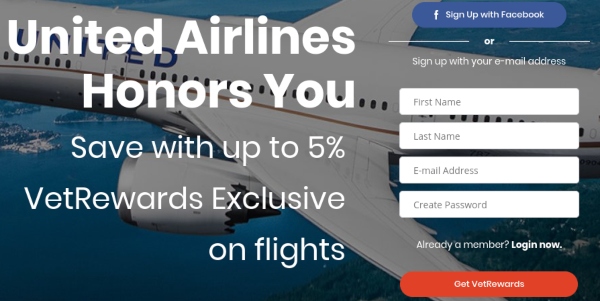 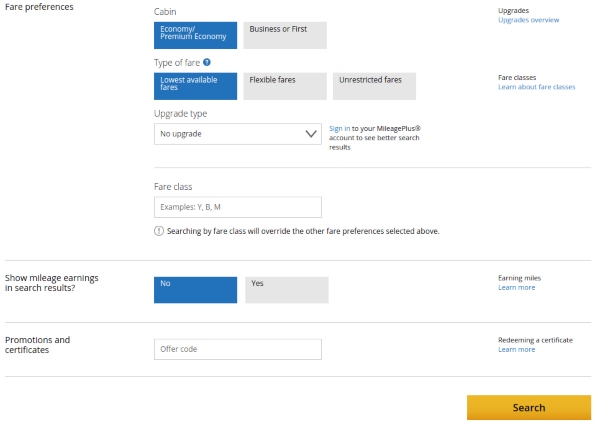 The frequent flyer program can hook you up with all kinds of special offers and complimentary services or upgrades.

Do you have some more questions regarding the United Airlines military discount?

We are here to help answer some of the most frequently asked:

How does the United Airlines military discount compare to other cheap flights?

Based on our research we found 14 major airlines that provide a military discount and 12 that do not.

United Airlines is obviously one of the 14, yet how it stacks up to the rest of airline military discounts is another question.

United has a fair though not outstanding military discount of the major carriers.

American Airlines has a comparable discount though it varies based on flight, and you have to call them directly to get a special military offer.

Though what separates American Airlines and Southwest from United Airlines (and JetBlue) is that you don’t have to be a member of Veterans Advantage in order to receive the military savings.

Meanwhile, Frontier Airlines and Sun Country don’t have a discount on airfare, but they do allow free bags.

Are there ways to receive a better discount on flights?

United Airlines and American Airlines may like to toot their own horn about supporting troops and giving 5% off a flight, yet if we are honest they are not always the best avenue to find discounted airfare.

The problem with the military discounts at United Airlines and American Airlines is you have to go directly through the carrier.

As a result, they are bound to provide you with only the standard rates.

Meanwhile, you can potentially get a better deal by considering a third-party travel site (even without a military discount).

Some of the top options include Cheapoair.com, Kayak.com, FlightHub.com, and Hotwire.com.

How much does it cost to join Veterans Advantage?

Veterans Advantage does cost money yet in the big picture is a minor inconvenience for all the special offers you will receive.

It’s worth joining the membership if you travel or shop frequently.

United Airlines is proud to support the U.S. Armed Forces.

The airline has a 5% discount on airfare through Veterans Advantage.

Active duty service members can also receive an extra baggage allowance at no cost with a valid military ID (also applies to your dependents).

Additionally, United Airlines has other special offers for military personnel including free membership to United Club Lounges (at select airports) as well as waivers on transporting pets from international flights.

Check out the military discount details for other airlines below:

United Airlines, Inc. is a major American airline headquartered at Willis Tower in Chicago, Illinois. It is the 3rd largest airline in the world, measured by fleet size and route network.