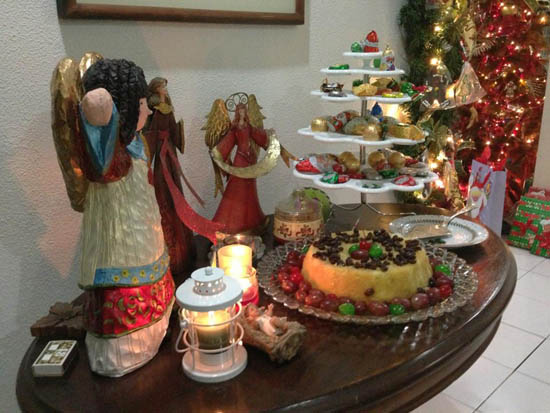 The year is 2006. My daughter pinched my flabby arms “mom your arms are soft and flabby” then nestled her head on my arms. That statement didn’t sound too complimentary to me but to my daughter, my flabby arms serves as a comfort pillow to lie upon when cuddling by the couch. I looked at the mirror and felt bad that I gained weight around my waistline. I lost 30 pounds in 2005 but I gained 10 pounds back because I have not been monitoring my weight for a year. Ugh. That’s what I discovered when I enrolled at Fitness First Weight Management Program in November 2006. I spent 7,700 pesos for a 11 week program of diet and exercise. It was an early Christmas present to myself. The best gift I can give myself is to take care of ME. Health is wealth after all. I neglected myself for a long time now and the ravages took a toll on my heart, blood pressure and diabetes. Life has been so blessed the past years that I look forward to a bright and healthy future.

Armand, my weight management consultant gave me a two page handout on “Holiday Guide to Eating” based on the American Council on Exercise, 2006. He’s a really nice , conscientious guy who worried I will over-eat during the holidays. Through the years, I have kept this holiday guide so I thought I’d share it with you . The italics are mine.

Guideline no. 1: Portion control is everything
Many people lose weight and keep it off with the simple strategy of portion control. Eliminating or even limiting certain foods is brutally hard during the holidays. So do the next best thing. Eat reasonably small portions, limit the foods you know you should limit, and don’t stuff yourself.

This really works. In parties, I just take a spoonful of everything. With desserts, I get a taste off from my husband’s plate.

Guideline no. 2: The next best thing to behaving perfectly is behaving well.
Most of us know by now what our “trigger foods are and the effects certain foods have on our mood, appetite and energy. If you can’t abstain from problem foods all of the time during the holidays, abstain from them most of the time. “Most of the time” is a lot better than “none of the time”.

Guideline no. 3: Get off the diet mentality
This is the corollary of Guideline No. 2. If you think of yourself as being “on” or “off” a diet, you’re going to get into trouble. Why? Because as soon as you go off, you go off, as in “deep end”. Don’t set yourself up for this disaster. A taste of cake doesn’t mean you’ve “sinned” and definitely doesn’t mean “what the heck, I might as well eat the whole thing”

Guideline no. 4: Don’t skip meals
A common strategy during the holidays is to skip breakfast- and lunchp because you know a big meal is comig , so you “save up” the calories for the celebration. This strategy backfires, because you come to the meal starving and wind up eating more than ever intended. Which leads to….

Guideline no. 5: Never arrive hungry
You know what foods you need to stay away from. Wll, those foods are a lot harder to resist when you’re starving and your blood sugar is in the pits. An ounce of prevention goes a long way here. A glass of juice, some crackers, a slice or two of cheese or bread with some peanut butter will keep your appetite at bay. Try any of them an hour or so before the big holiday dinner and watch your willpower soar while your waistline stays in place.

Guideline no. 6: Go to the buffet line with a small plate
A full salad plate looks like a lot of food and psychologically “feels” the same way. You can always go back for seconds, or even thirds; but all of this slows down the eating process, giving you more time to feel full. And more often than not, the larger portions of food you have eaten if they had been on your plate will wind up staying on the buffet table.

Guideline No. 7: Bring snacks while shopping
Prowling the mall for hours leaves everyone starving and vulnerable to the usually bad fastfood choices.

Guideline No. 8: Replace sweet with spicy
Craving for sweets sometimes evaporate when you put something pickled or spicy in your mouth. It’s okay to indulge the occasional sweet craving , but eat something spicy or pickled first and you may find you no longer want to.

Guideline No. 9 : Be sure it’s not thirst.
Many times when we crave food, it’s not really hunger that’s driving the urge, it’s mild dehydration. So drink tons of water. A slice of orange, lemon or lime will flavor the water and cut your cravings; flavored non-caloric seltzers accomplish the same thing.

Guideline No. 10: Finish your big holiday meaks within an hour of starting
The body produces a second insulin hit if it senses a lot of food coming in continuously . You can avoid that second hit (and the subsequent fat storage that it triggers) by finishing within an hour of starting. If you see something you like that you forgot to eat within the hour, that’s fine; just save it for tomorrow. It’ll still be there and you won’t be wearing it on your hips.

Guideline No. 11: Begin each meal with a salad
It fills you up, provides fiber and is a wonderful alternative to bread.

Guideline No. 12: Divide your plate into thirds
Think protein, vegetables and the carbohydrates you probably crave. Imagine that your plate is divided into thirds, one section for each food group. The carb section has to include not only the starchy carbs that are staples of holiday dinners but the desserts too. So if you’re going to eat dessert, adjust your portion of the other carbs accordingly. Together the “meal” carbs and dessert carbs should make up about one-third of the holiday meal.

Guideline No. 13: Fiber is your secret weapon
Not only is finer supremely healthy and directly related to the reduction of risks for a whole host of diseases, it is a huge player in the weight-loss field. It also contributes to a feeling of fullness.

Guideline No. 14: Plan ahead
During the holidays, try to plan around where you’re going, what temptations are likely to arise and how you’re going to deal with them. Decide in advance what you’re going to allow yourself, but prepare for it so you don’t go overboard. Don’t be afraid to taste things without finishing them.

Guideline No. 15 : Eat Slowly
Hormones signal the brain when you’re full but it takes about 20 minutes from start time before you feel it. Slow eating not only aids digestion but also gives your brain a chance to know what the stomach is doing. If you make the meal last, by talking, putting down your fork between bites or just plain waiting, you’re less likely to eat on “automatic pilot” and more likely to realize you’re full.

So it says plan ahead. It’s been a Christmas tradition to order “Lechon Paella” from Luijoe’s godfather (Lydia’s Lechon ) in our family gatherings . I’ve warned my husband that it’s really unhealthy to have all that greasy food. But he says , it’s only once a year.

Now what do you usually eat for Christmas lunch, dinner or noche buena? 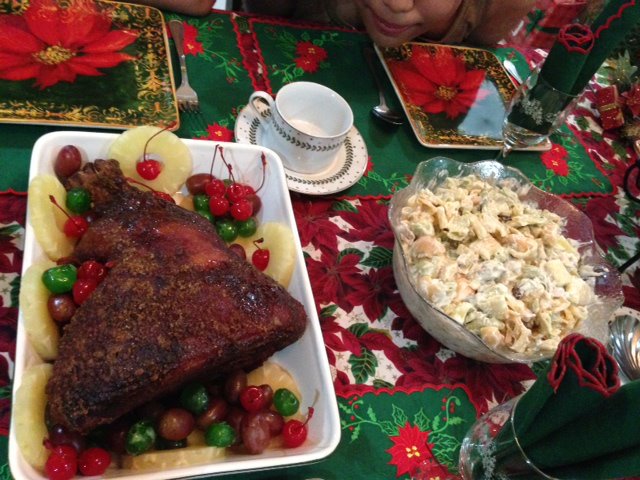