““It is perfectly monstrous the way people go about nowadays saying things against one, behind one’s back, that are absolutely and entirely true.” Oscar Wilde 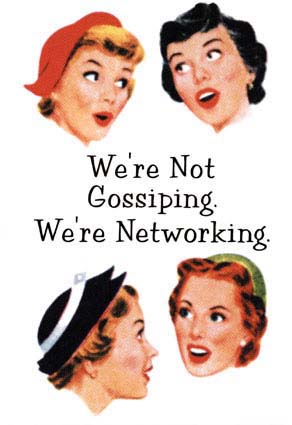 Just recently, I received an email from a friend (let’s call Delta) straightening the facts of a gossip in a recent reunion. The email was directed to the alleged gossiper (let’s call Alpha) and another friend (let’s call Beta). Take note that this is communication among “best” friends.

It was supposed to be a clarification of the “gossip” but instead the communication was totally ignored and made public by Alpha and Beta. The point of the email was to clarify. Direct , clean conversation clears the air and paves the way for good feelings about ourselves and our relationship with others.

All of us love to share tidbits of information Ã¢â‚¬â€œ it’s human nature. Right? except it often appears as mere gossip and defined as ““idle talk or writing, tattle”. One can gossip good news, but too often the gossip game takes over and distortions set in. Negative gossip, the showing of others in a bad light, is especially popular as gleaned by the high sales of the gutter press. Scandal is more titillating!

Usually, when I hear a negative talk about a friend, I just shrug it off because there are always two sides of the story. That last gossip encounter made me realize that if people can gossip about other people in front of me, then I could be the next gossip victim. Though I was a gossip victim, I was able to discuss and straighten it out in the end with much difficulty but still, it was resolved. But this one is different. I discovered that Alpha and Beta removed Delta and me as Facebook Friends and perhaps others too. What was all that about? Aren’t friends supposed to talk and discuss? Were they friends in the first place? Were they guilty? or afraid to confront the truth?

Moral of the story: Don’t pass on ““juicy tidbits” of information (true or not) unless verifying the facts from the ““gossipper” or the ““gossippee”. It’s tempting to do so. Like the child gloating ““I know something you don’t know..bleh” then sticks out tongue. Some may think that by exposing others, they themselves appear more righteous. Remember. when YOU point a finger, there are three fingers pointing back at you. Blowing out someone’s candle does not make yours shine brighter.

If there is gossip among friends, clear the air instead of being defensive and ignoring the issue. What’s funny is that they chose to place the scapegoat on the “informant” which is immaterial because the issue is the malicious gossip. A mere explanation or an apology would have cleared the issue but Alpha chose to ignore.

Studies say that Gossip creates friendships, it does not break them. Research shows that sharing negative attitudes about others may have positive consequences; it promotes closeness and friendship. But this gossip was different because it involved Delta’s family. Certain gossips destroy friendships because it maligns the character of a person. Even if you are not actively involved in the gossip, if you are in the group and not sticking up for your friend, it could still damage your friendship.

I resolved that I will resist and place boundaries when I am faced with another gossip.

Here are some tips I read to deal with gossip better:

1. Create healthy ways of connecting with others that do not require negative talk about a third party.

2. When you are told about another person, ask for verification of the information. Trusting that what is said is true without challenging its veracity makes you a partner in perpetuating gossip.

3. If you hear negative talk Ã¢â‚¬â€ refuse to listen and politely attempt to stop the speaker.

4. Ask the ““gossipper” to tell you what positive things he may relate about the individual he is criticizing.

5. When you are entrusted with a secret, feel honored and never repeat it to anyone. Repeating confidences is like stealing one’s dignity.

6. Feel free to share positive gossip with others, provided that your facts are correct.

7. As enjoyable as it may be to bond with someone temporarily through gossip, the damage to all parties is immeasurable. Resist the momentary temptation for gaining a wholesome sense of self-respect.

Have you ever been a victim of ““bad gossip”?