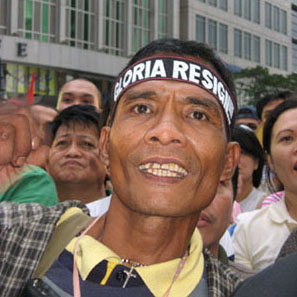 I was there at the the Interfaith rally at the corner of Ayala and Paseo de Roxas avenues today, February 29. A light drizzle greeted me when I arrived hours before the start of the rally. That didn’t dampen my spirits though. I had faith that the InterFaith rally will continue despite the drizzle. Hope reigned in my heart that the InterFaith rally will set the ground for Filipinos to take a look at our current situation. While waiting for the program to start, a buzz of activity unfolded before me : positioning of anti-GMA placards, the security precautions, TV network preparations, enterprising vendors. Vendors hawking all sorts of wares from ice cream and grilled dried squid to hats, buttons, head gears, shirts and umbrellas loitered around, mingling with the rest of the early birds like me.

Using Twitter from my cellphone, I micro-blogged the unfolding events but the Smart3g slowdown prevented me from further updates.

By some miracle, the drizzle stopped and its place a rain of confetti from the BPI building fell on my face as I gazed on the looming skyscrapers surrounding the stage. The best is yet to come, as I positioned myself across the stage together with some senior citizens. A friend was supposed to join me but her husband felt it was dangerous (If that happened to me, I tell you, I will brandish a placard of protest inside my home. Thank goodness, Butch supported my decision). I didn’t feel alone. I had lots of company. The Youth sector and even professional groups like the Integrated Bar of the Philippines soon arrived behind me.

A banner with “Hear no evil, speak no evil, deliver us from Evil.” faced me to my right while various Philippine Flags to my left waved to the unison of the soft breeze of Ayala avenue. I’ve never felt so proud to be a Filipino.

The Erap magic is obviously alive as the man with the Gloria Resign sign showed off his Erap shirt and also judging from the deafenings shouts of “Erap! Erap!” from his supporters. I don’t particularly like Erap but I wasn’t there to argue with people of different political affiliations.

The InterFaith Program touched me to the core. Prayers for Truth, Justice and Change from the various religious groups especially the Koran reading by a Muslim boy moved me to a state of reflection. 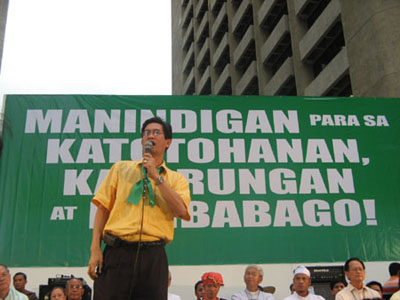 The charismatic Jesus Is Lord leader Bishop Leo Alconga led the crowd in prayer, with almost everyone raising their hands in prayer in the air. 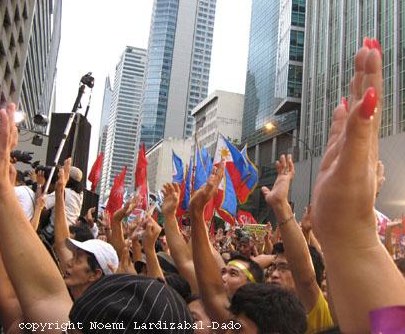 Hands raised in prayer evoked a heart-rending moment during the InterFaith Rally. Three prayer appeals including one calling on the President to “heed the will of the people,” and another calling on the Armed Forces to protect the people, not just one family surrounded the air. A few shed tears. One felt the crowd’s faith that truth will soon happen. We may not know the tipping point but our faith is all we have at this point.

In a stirring moment, green balloons were set free into the air, as a young man sang a gospel song in falsetto and confetti rained on the crowd below. My prayers echo Bishop Jessie Suarez of the United Church of Christ in the Philippines:

“We have been looking for justice. Because we have the [biggest] number of victims of extrajudicial killings. No one has been punished.

Video of the release of the balloons, as a symbol of prayer being brought to the heavens.

Religious leaders took turns in saying prayers for the administration to account for charges of corruption arising from the $329-million NBN deal with China’s ZTE Corp. 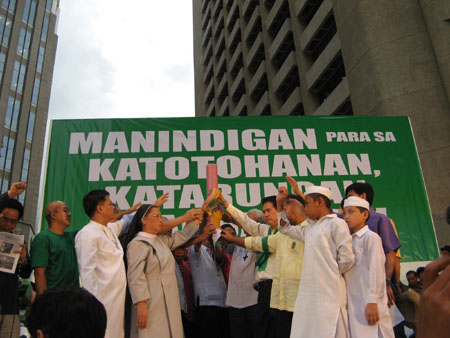 I thought the presence of former Presidents, Cory Aquino and Erap seemed out of place. Okay fine, Cory urged the crowd to keep on praying for truth: “Let’s continue praying. We know what can help us in these times. I thought I’m finished with all this because I’m old. But the call of the times is for us to be unified to end this deception and know the truth.” Erap, on the other hand, jeered President Gloria Macapagal-Arroyo for “overstaying”. Cory and Erap’s presence in the rally showed the signs of times of different politics coming together for one cause but it didn’t augur well with some of the Interfaith rally organizers who walked out of the rally.

Thunderous applause greeted Rodolfo “Jun” Lozada whose presence was announced a few minutes after the two former Presidents left at past 6 p.m. 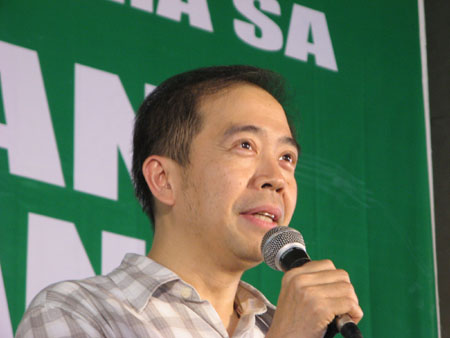 The crowd loved Jun Lozada. He was the man of the hour.

At this point, I found myself squashed among photographers and camera men from various media organizations. Feeling suffocated, I weaved myself out of the thick crowd so I could feel the pulse on the rest of the Filipinos who attended this rally. On my way out of the crowd, I espied on a girl in a wheelchair wanting to move to the front of the stage. The crowd gave way to this disabled girl. Nothing could stop her voice from being heard.

The atmosphere along Makati Avenue felt like a festive fiesta. Groups of rallyists converted Ayala Avenue to picnic grounds. Others brought along snacks. Feeling sapped of energy, I bought fish balls.

Those far from the stage were able to watch the program through an outdoor TV screen. The crowds soon dwindled as soon as Jun Lozada left the stage but some groups opted to stay and rendered their own mini-programs.

The InterFaith Rally is just a start. . Imagine that! 80,000 people marched and shouted ““We want the truth!” and ““Gloria resign!” The rally was a success in terms of sending a message to President Arroyo.

I have faith the truth will soon set us free.

I hope the rally has somehow shown you some flicker of hope.

For love of this country, for the future of our children, for the many who have sacrificed and died to uphold our rights and ideals, I urge you to do what you can. As ordinary citizens, we can do much more for the Philippines than sit around and let crooks lead us to perdition. We owe ourselves this. And we owe our country even more.

View more photos of Interfaith Rally which I took from the front of the stage.

The interfaith prayer rally carried the theme “Manindigan para sa Katotohanan, Katarungan at Pagbabago,” which, according to the organizers, covers not only the quest for truth, honesty, and accountability but also various calls for President Gloria Macapagal-Arroyo to resign amid the scandals rocking her administration. Green was will the new color of protest as people of different faiths and political beliefs converged again at the Ninoy Aquino Monument in Makati City to pray for truth and accountability.

Manolo Quezon – A throne of bayonets

Will- Inertia: Sustaining the EDSA Movement

Tonyo Cruz – MALAYA: From all sectors they come (to Ayala interfaith rally)

Luis- Scenes from a Rally

Blogs on the Interfaith Rally

Sonnie on Tired of People Power

Arbet on UNDERMINED INSTITUTIONS WILL CONTINUE AS SUCH

Lots of Photos taken in the Interfaith Rally

Street Food at the Friday Rally

My Photos of Interfaith Rally