Wowowee will be aired again but there were lessons learned from the ULTRA tragedy. For one:

Now there will be separate entrances for senior citizens and children, who should be accompanied by adults. A blood pressure check is also mandatory for studio contestants, according to Cory Vidanes, ABS-CBN vice president for entertainment. ““Blood pressure rises with the excitement,” she explained. ““We want to make sure they can take this kind of excitement.”

Though I believe that the show promotes “mendicancy and dependency”, I am glad to know that they are having separate entrances for the children and the elderly.

There was one child victim from this tragedy and I had the opportunity to spend an afternoon with the bereaved family. This is my story that I wrote for The Compassionate Friends. (written on the day of her burial)…. 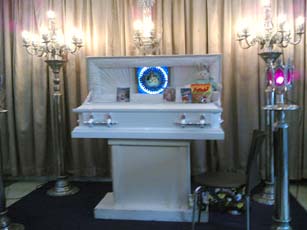 Today is the burial of Jullian Elienne Book, the youngest ULTRA stampede victim . Her ashes will be laid to rest at the St. Peter’s Basilica, Commonwealth Avenue at 4:00 PM today. May she rest in peace.

So Let me tell you about Myrna Book and Edgar Longanilla, parents of 4 year old Jullian Elienne Book or Apple for short. This is their story.

Why did I visit? In the past, I’ve always had the urge to visit and comfort newly bereaved parents but my shyness always stopped me from following through my instinct. This time, I didn’t let shyness overtake me. It was as if my son was urging me to go.

I arrived in Arlington Funeral Parlor Pasig at around noontime last Tuesday hoping to spend an hour just being around and see how I could help in my own little way.

When I arrived there, it was only Edgar, the father and his brother. Immediately, I shook hands with him and offered my condolences in my faltering Tagalog/Taglish. I said that I too lost a child through an accident and offered him emotional support through The Compassionate Friends . I added that if ever he needed to talk about his grief, he can just call me. I told him that I had seen his pain and anguish captured on TV and that I knew I just had to drop by. He immediately warmed up to my presence and with a hoarse voice due to days of crying, he narrated the story of Apple.

Much later, Myrna arrived together with Carlo, the man who carried Apple’s lifeless body to Rizal Medical Center.

Apple’s story caught media attention but not as detailed as I had the privelege of hearing the stories firsthand from Carlo, parents Myrna and Edgar and then Fernando, the boy who first brought Apple to the roof for safety. I had overstayed at the funeral parlor only because they were all telling their stories. I didn’t have to prod them. They just opened up. It was therapeutic for them to unload their anguish over the tragedy. Telling the story eased some of the pain, indeed.

Fernando and Apple bonded for quite some time because they were in queue since Friday afternoon. Seeing that the crowd was unruly that fateful saturday morning, he lifted Apple to the rooftop together with the other children. Thinking she was safe, he headed back to his queue.

When the stampede occured, Apple saw her mother being trampled and crushed beneath a pyramid of people. She jumped from the roof to her mother below . Her mother was pinned.

As she said that, she tried to pull out the people on top of her but couldn’t. Apple held on to her mom’s hand as if to pull her out of safety. The crowd pushing each other felt like huge waves of the ocean. She said a prayer but the next wave pulled them apart.

Carlo says that people just stepped on people and not thinking. Not caring that they were stepping on them. And I asked Carlo “why do you think they did that?”

“what do you mean shock?”

“shock that they could get in the gates finally”

Were they caught in some sort of trance or hysteria?

Carlo is a 24 year old jobless man but he was not in a state of shock. He saw Apple’s lifeless body and carried her . Since he is a nautical engineer, he knew Cardio Pulmonary Resuscitation (CPR). Immediately , he applied CPR to her and at the same time running towards the ambulance.

Myrna related that she passed out. She was the only survivor under that pyramid of dead people.

At the ambulance, Carlo ordered the health personnel to administer CPR to the girl.They refused to perform CPR for some reason. Carlo continued to give CPR. She still had a pulse.

At Rizal Medical Center, doctors were nowhere to be found. Apple was the first victim to be admitted in RMC. When the doctors came, she was pronounced dead on arrival. Carlo wouldn’t let go of Apple. He held her in his arms. Apple’s eyes were wide open as if gazing at Carlo and he gently closed it.

Carlo could feel Apple’s warm body turning cold. After 2 hours, dark violet bruises appeared all over her body. On the sides of the neck, on her chest and he noted deep heel marks of a man’s shoe on both of her arms.

(I can’t believe that people stepped over this poor little girl.)

He did not want to let go of Apple until her mom arrived.

“ I would trade my life for this girl. This girl has so much to live.”

When he let go of Apple to her mother, he broke down and cried. He didn’t want to leave her.

Carlo didn’t even know this little girl. It makes me wonder at the Pilipino psyche. I heard of stories of people oblivious of the fallen victims on the ground. Yet, when Carlo tells his story, I am so humbled that there are still good people inspite of that tragedy.

This is where Myrna and Edgar related their story…

Myrna wonders why she survived among those pile of people . Why did her daughter die instead of her?

So many questions. Edgar and Myrna are in a state of confusion. I sensed that Edgar wanted a meaningful memorial service and I suggested if he wanted to do a eulogy. I explained what eulogy meant. He became enthusiastic and started making plans on when and how to deliver his speech. I gave him ideas to include Apple’s life as a “bebo” girl, his memories of her .

The talk of cremation came. Apple said she wanted to be cremated 2 months before this tragedy so that’s what they are planning. But father and mother are at odds because the mother wants the ashes at her home. The father wants it in the crypt at the St. Peter’s Cathedral. Apple’s body is in Olongapo City and is returning back to Manila on saturday, February 11. I don’t know what their final decision is with regards to her ashes but I hope they resolve it soon.

At this point, Fernando arrived at the funeral parlor and breaks down as she saw Apple’s coffin. He thought she had placed Apple safely on the roof. They bonded while they had waited in line since the wee hours of Saturday. He related how you could hardly breathe in the crowd.

If you raise your hands up, you can’t bring it back down because your body is wedged tightly. You couldn’t even breathe. You had to raise their head up towards the sky to get oxygen.

Myrna is disappointed that ABS CBN can only offer 70,000 . They were told that the money will be used for expenses to bring Apple back to Manila and her cremation.

She is exasperated “They promised me all the help. Why do I have to trouble myself with all the preparations?”

I agree. I remember that I couldn’t even handle Lui’s funeral arrangements. Family members arranged the planning and all I did was to nod in pain, affirm or disagree.

Fortunately, Edgar’s company lawyer was around to render legal advice. She appeared reluctant to air out her grievances to the ABS CBN staff but I told her that it’s better to let them know now that they are still around. They continued to talk and resolved the matter.

Based on their stories, I concluded that most of the fault lies on the people responsible for crowd control.

1. They knew the crowd was getting huge but the event organizer did nothing to disperse them.

2. They did nothing for the safety of the children and elderly. No one watched out for the children when they were at the rooftops. Why didn’t they even let these kids and elderly inside the compound for safety?

3.They anticipated 30,000 people to show up and they had previous knowledge that 17,000 could only be accomodated in ULTRA. So what did they plan to do with the 13,000? obviously , to televise them outside, sweating them out? For publicity sake that there was a crowd? They had no alternative plans for the excess crowd.

I agree with the fact finding committee that these people were treated like animals. My goodness, they could hardly breathe . Carlo told me that all around them, they could smell pee. The smell of urine and the carbon dioxide alone can make you faint. He had to relieve himself into a bottle. Lolas squatted on the ground to pee.

For the last time, I stare at Apple’s body. Her father tells me that the beautiful white dress was donated . Apple’s hair is quite long and thick. I note the ugly looking numbers on her arms..99-%#&&# . I forgot the rest of the numbers. Above the coffin is a photography of her bubbly face.

What is the meaning of all of this? There must be a message somehow.

So many things in my mind but my heart goes out to all the dead and the injured victims.

Let’s continue to pray for them.