““Hope never abandons you; you abandon it” George Weinberg

I suppose I should be jaded by now. After living through the Marcos dictatorship, the revival of democracy through President Cory Aquino and the perception of President Gloria Arroyo‘s (GMA) bleak administration, the Philippines is not getting anywhere. The security of our children’s future is at stake as usual. I often wonder if our politicians truly love our country or are just living for the moment. They too have children, nieces or nephews who will inherit the future of this country. What is the use of all that money when you can’t bring it to the grave with you?

We agreed, let us forget about ourselves,” he said of his conversations with Noynoy. ““This is not about us. This is about our people and our country.”

““I do this for unity and in support of change. And that means that somebody must make a sacrifice. It must be me. Ako na,” Roxas said

That is a remarkable move for Senator Mar Roxas but it is not surprising news. 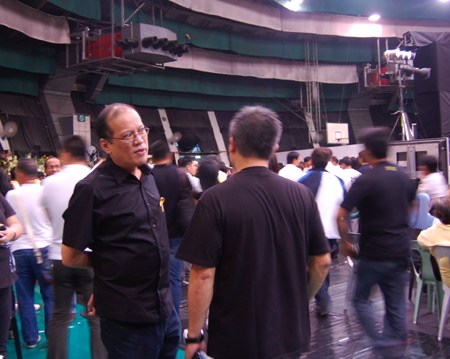 .
In our PCIJ training seminar last week on Election Coverage with Ramon Casiple on Getting Into the Candidates Mind: Detecting Spin/Propaganda/Campaign Strategies: Power Brokers and Campaign Financiers, there was already speculation that Noynoy Aquino will be the game changer. The EDSA 2 failed expectations for political and governance reforms. The death of Cory makes it difficult to implement GMA’s emergency rule and charter change. 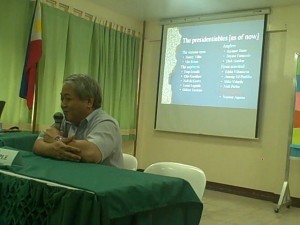 We need to appreciate the impact of August 5 and how it changed the landscape. There is a marked difference on the critical landscape before and after Cory’s death. The number of people who lined the streets during Cory’s funeral constituted a resurgence of people power. It was missing before. Traditional politicians thought it was no longer there. Conventional wisdom of the election (i.e. measurement of money, network, survey) was the rule of the game before August 5.

Rules of the game have changed. Before Senator Mar Roxas declaration yesterday, there was no candidate in the current crop that fitted the People Power framework.

If Noynoy Aquino runs, one has to remove normal logic of the conventional wisdom in traditional politics. That is what is called the game changer, exactly the same scenario where Marcos’ popular line “housewife?” wherein he questioned Cory’s capability to be a President. Candidates are nervous of people power because it was demonstrated during the funeral march. The previous people power was heavily Metro Manila based but in August 5, the impact is similar to a “Manny Pacquiao” effect but political in nature. There is a potential to overturn the logic of 2010 elections.

It is not question of competency. Values, preservation of democracy and no ambition and intention to stay in power is the Cory legacy which Gloria Macapagal Arroyo is not. That is the campaign line.

Are people’s memory short? It’s almost 7 months to the election and will people remember Cory’s death?

We have to remember that it has been 23 years since People Power. There is still that memory though it is not absolute that whatever Noynoy does, the people will support him.

Historical lesson is that the generation that grew up under Martial Law and People Power inculcated values that was passed and continues to be passed on through the current generation. If Noynoy comes into that framework, it is still there. It is not because he is simply Noynoy. You can’t also say Noynoy does not know anything. People will think that Noynoy will continue the legacy. Even if he has no experience, he won’t go against that legacy Unfortunately for other politicians, that is the legacy that the generation remembers. That generation is still alive today.

We can’t really use conventional wisdom with Noynoy. He had no plans of running as Presidential candidate. The pressure was palpable after August 5.

The issue is GMA. The factor is big because there is a real crisis. People’s perception is that GMA might be a new Marcos. The fear of GMA staying in power beyond 2010 is real. If GMA wasn’t around, there is no urgency in the Cory legacy or the Cory magic. Noynoy will just represent the reform movement and it won’t be simple to win. He will work even harder to prove himself.

But will Noynoy make it as the game changer for Philippine Elections 2010? It is easy to be cynical on the sudden shift of conventional wisdom but I can only hope like I hoped during the snap election, 23 years ago.

At the press conference at Club Filipino at 6:00 PM, Noynoy says “This is not about myself or Mar. But if you are with us, there is this huge mission of service to country.” He will go on spiritual retreat to seek guidance and discernment, to start this weekend before he announces anything significant.

Aquino made the announcement of his candidacy for the presidency at about 8 a.m. at the Club Filipino in Greenhills, San Juan City, the same venue where his late mother took her oath as president in 1986.