[tag]Psycho killer in Rizal[/tag] on the loose? I didn’t really think much about it until …Diding, our household helper arrived home after walking the dog. Her worried look was painted all over her face. Maam, is it true there is a psycho killer? While walking the dog at around 6:00 PM, a concerned neighbor urged her to go back home because it was getting dark. Diding laughed. The neighbor berated her and added Don’t say I didn’t warn you about the serial killer. There are eight of them now.

Earlier, I recalled stumbling on this blog entry, Psycho Killer in Rizal Scare Be Aware but the source of the news were all based on blog entries. I placated Diding’s fears and promised to gather some facts first. Doing a search on Psycho Killer in Rizal yielded so many versions of the serial killer. You will be amazed at the description of this killer.

1. His name is Dennis Garcia;

2. He victimized girls just because his wife fooled him. As revenge, he raped girls,some people said he removed one breast, ate it, threw acid to the victims face before raping. He is like Hannibal.

3. He was said to have raped a girl, cut off one of her breasts and ate it, inserted something inside the girl’s privates and completely mutilated her face;

4. He kills both male and female.

5. He’s from Tanay, Rizal and he’s rumored to be a deadly one.. travelling by night.. he knocks on doors of his prospects and if denied entry.. he forces his way INSIDE.

6. He is bald, fat, has Chinese eyes, wears wigs all the time.

8. He was last seen in Delapaz St. Caniogan Pasig City last night at 3:00 am.. knocking on a victim’s doorstep.

9. They said he once pretend to be a tricycle driver at Village East and murdered so many people. He is now (they said) at Greenpark Cainta or Vista Verde, or Green Park Pasig.

10. Two days ago (February 16) he victimized another lady.. the innocent young lady is a high school student in one of the public high school here in lower antipolo… he raped the victim and cut off her 2 breast as one of his trade mark here…

11. also last night he was seen here roaming around in the middle of the night.. but this guy is hard to capture…

12. the local police here told the community that this guy has a group but their identity is unknown…

Ugh, the serial killer is near my house! All the blog entries screamed of this serial killer moving from Rizal, to Marikina, Cainta then Pasig City.

Naturally, that freaked me out because I live quite close to the Pasig City, Cainta, Marikina vicinity.

But is it true? if true, how much of it is based on hard evidence?

Fortunately, I found this video on GMA News of the Psycho Killer which I showed to Diding. 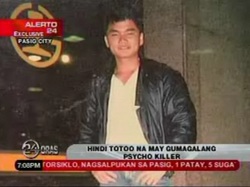 Rizal PNP says it is true that there is a person named Dennis Garcia who is accused of raping and killing a 19 year old Kennely Calisura in Tanay, Rizal last December 29, 2007. But… and here lies the difference, Dennis didn’t actually do all the monstrosities listed above. There might be other killers on the loose which is being attributed to the Psycho Killer, Dennis Garcia. Is this the work of a serial killer? What is a serial killer?

A serial killer is someone who murders three or more people with a ‘cooling off’ period between each murder, whose motivation for killing is largely for psychological gratification.

All serial killers suffer from some form of Antisocial Personality Disorder.[2] They are usually not psychotic, and thus appear to be quite normal and often even charming, a state of adaptation which Hervey Cleckley calls the “mask of sanity.” There is sometimes a sexual element to the murders. The murders may have been completed/attempted in a similar fashion and the victims may have had something in common, for example occupation, race, or sex.

Tell me, if Dennis Garcia is a serial killer and is known to rape girls, where are the bodies of these victims? Only one has been identified. Her name is Kennely Calisura. What are the names of the other victims? 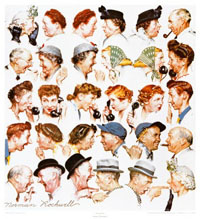 Whether a psycho serial killer is true or not, it plays to be safe and vigilant and secure the doors.

View Related News on the Psycho Killer of Rizal