I have been tagged by Niceheart to list down six weird things about myself. Yet another [tag]meme[/tag].

So here are 6 weird things or habits about me. Beware I am obsessive compulsive in most of these weird habits.

1. I like my books to be arranged neatly in the bookshelves from tallest to shortest. Mind you, the books have to be aligned in a straight line too. Something like this

Actually, when I trained our helper to fix books from tallest to shortest , she did an even better job. I think she became even more OCD than me. Or was it she got contaminated with my obsessive disorder?

2. I want my bedspread carefully folded on the bed with very little crease. I have to pull it together with my other helper on the other end to attain an “ironed look”. I drive my daughters crazy by telling them to do this. I’ve since left them to fix their dorm beds the way they want it to be but at home, I end up pulling it for that “ironed look” when they are gone. Something like this: 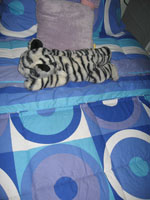 I never used to have this strange habit but like number 1, my helper did a better job and I got hooked on that no-crease bedspread look.

3. When I work on a new website, I can sit down for 8 hours without eating. I have since stopped working on web projects because I know myself. I get too obsessed . The last time I worked on a website was the The Compassionate Friends and it took me 8 hours to put it all together.

4. I am such an early bird. If I have an appointment, I arrive at the venue like 15 minutes earlier. I hate being late but I don’t mind waiting if the other party is late. Fortunately, my 2 daughters got this prompt habit which worked in their favor during choir tours abroad. Sadly, my husband is not prompt. And the worse thing is he gets mad if you’re 5 minutes late. His watch is advanced like 10 minutes so he won’t be late for his appointments. I notice people who advance the time in their watches have time management problems.

5. Whenever my husband and I have a fight, I visit the facial spa to relax my facial muscles. I don’t want to look like an old hag after a fight. It’s been a long time since we had a major fight and so it’s been ages since I’ve gone for my facial. I might need a facial spa just for relaxation.

6. Everything has to be color coordinated. Well , my household helpers are new so I’ve always taken it for granted that they know my quirks. Once when I entered my peach/light green themed kitchen, I caught a blue towel on the towel rack. I literally yelled. No blue towels in this peach colored kitchen! The blue towels are for the powder-blue bathroom. The way I reacted sounds like the kitchen caught fire. Color coordination in the different rooms should also be followed.

Haha now you know how weird I am. Are you weirder than me ?