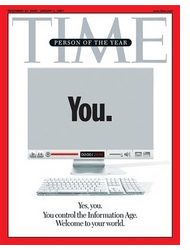 [tag]Time Magazine’s Person of the Year[/tag] issue is coming out on Monday, and guess who that person is?

It’s me. Well yeah, it’s me, it’s you, and apparently, everyone else in the internet.Read Time Cover story. Every year Time Magazine recognizes one person, or persons, that, through ability, invention, accomplishment, or otherwise, has significantly influenced the world for that year. ” YOU were named TIME magazine ‘Person of the Year’ Saturday for the explosive growth and influence of user-generated Internet content such as ‘blogs’, video-file sharing site YouTube and social network MySpace… You — YES, YOU — beat out candidates including Iran’s President Mahmoud Ahmadinejad, China’s President Hu Jintao, North Korean leader et. al.”

America loves its solitary geniusesÃ¢â‚¬â€its Einsteins, its Edisons, its JobsesÃ¢â‚¬â€but those lonely dreamers may have to learn to play with others. Car companies are running open design contests. Reuters is carrying blog postings alongside its regular news feed. Microsoft is working overtime to fend off user-created Linux. We’re looking at an explosion of productivity and innovation, and it’s just getting started, as millions of minds that would otherwise have drowned in obscurity get backhauled into the global intellectual economy.

Who are these people? Seriously, who actually sits down after a long day at work and says, I’m not going to watch Lost tonight. I’m going to turn on my computer and make a movie starring my pet iguana? I’m going to mash up 50 Cent’s vocals with Queen’s instrumentals? I’m going to blog about my state of mind or the state of the nation or the steak-frites at the new bistro down the street? Who has that time and that energy and that passion?

The answer is, you do. And for seizing the reins of the global media, for founding and framing the new digital democracy, for working for nothing and beating the pros at their own game, TIME’s Person of the Year for 2006 is you.

Do you deserve the award?

You readers, bloggers and internet surfers deserve this award. A recent example is the succesful “Thousand Bears Projects” for the Children in the Bicol Tragedy. Yesterday, more than a thousand bears have been attained and awaits the children in Bicol this week. Cathy blogs and thanks everyone who has helped make the Thousand Bears for Bicol (TBB) project a dream come true. Donations came as far as Canada and the USA. There are more bears being donated from the USA which will be sent at a later time . Why? The buzz created by bloggers , the readers and friends who picked up the plea brought this phenomenal success.

So for the year 2006 you have influenced the world more than anyone else. We can do this again. We can embark on world-changing actions in our own little way. Power to the People— You control the media now, and the world will never be the same. Meet the citizens of the new digital democracy . You can do it.