US elections is just a few weeks away. As a tourist, US politics is all so new to me. I see the American flag and candidate signs in front of homes and certain spots of each city and state. I like that the signs are not littered all over the place. It is quite neat actually. Conversations in dinner table are now centered on the upcoming elections and some propositions that one needs to answer on the ballot. It’s my first exposure to US politics. Normally, I just read about it in the newspapers. Sunday mass and the Catholic church in Northern California is a revelation in itself. After the mass, a group passed out brochures on Proposition 8 and a “Voter’s Guide for Serious Catholics”. 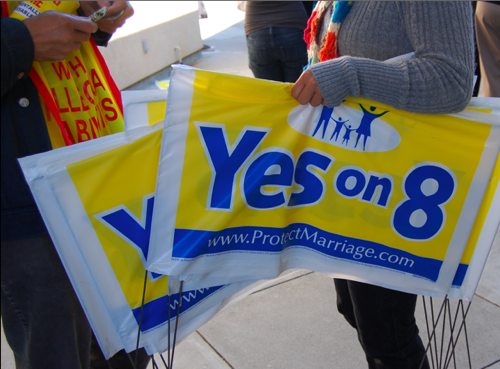 While reading the Voter’s Guide for Serious Catholics , it lists 5 non-negotiables:

This is similar to the Catholic Bishops making a statement in all the churches in the Philippines prior to elections. Serious Catholics need to read this guide so it will enable them to cast a vote in line with the beliefs of the Catholic faith. Not everything is as clear as black and white. Take for instance this hot issue called “Proposition 8”. It is being promoted by serious catholics that a YES vote to Proposition 8 is better for society because “Only Marriage between a man and a woman is valid or recognized in California”. However, a YES vote on Proposition 8 does not take away any rights or benefits from gay or lesbian domestic partners. Right now, it seems there is a close fight between the YES and NO votes.

It’s quite a gray area actually. I feel that society is dependent on heterosexual marriage for the perpetuation of society and that the word “marriage” is reserved for heterosexual couple. Then I have to see it in the eyes of the couple in love and wanting to seal it in marriage. Is the word “marriage” just a label or does it need to be redefined?

“Yes, I am Catholic so what does that have to do with my choice of Obama? just because he is a Democrat and supporting women on the right to choose?” “Oh and Joe Biden is a Catholic”

Following that logic, does a woman vote for Sarah Palin just because she is a woman?

As a Filipino, I am interested in Senator Barrack Obama’s foreign policy. In Obama, I see a president willing to reach out to world leaders, whether friend and enemy, to open dialogue and resolve differences through diplomacy rather than military engagement. After all, when did it hurt to sit down and talk to our enemies? 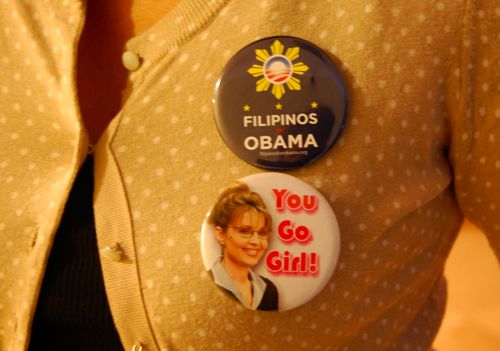 An Obama election will send a signal to minorities across America and to countries around the world that the US is breaking through the racial divide, opening their hearts to people of all colors and religion.

The US needs change. My 3 siblings in the US need this change.

Who do you root for? Obama-Biden or McCain-Palin election?