Technology inside the classroom is not a new idea. Even though technology progresses, the message is relevant. I came in an era of filmstrip projectors, copy machines, tape recorders, cassette players and television sets. Then VCRs, CD players, DVD players and a myriad of other tools came along. These are forms of technology that have aided teachers and enhanced instruction in the past. Today, Virtual reality (VR) is the future of education. Students will enjoy VR-enabled textbooks and virtual classrooms soon.

The skepticism of VR on our kids is a concern. I dealt with the same apprehension when I first introduced my children to the internet in 1995. The decision to make technology a healthy and positive part of family life was to embrace it. I learned to educate myself about it and go hands-on with new devices, apps, social networks and services wherever accessible. 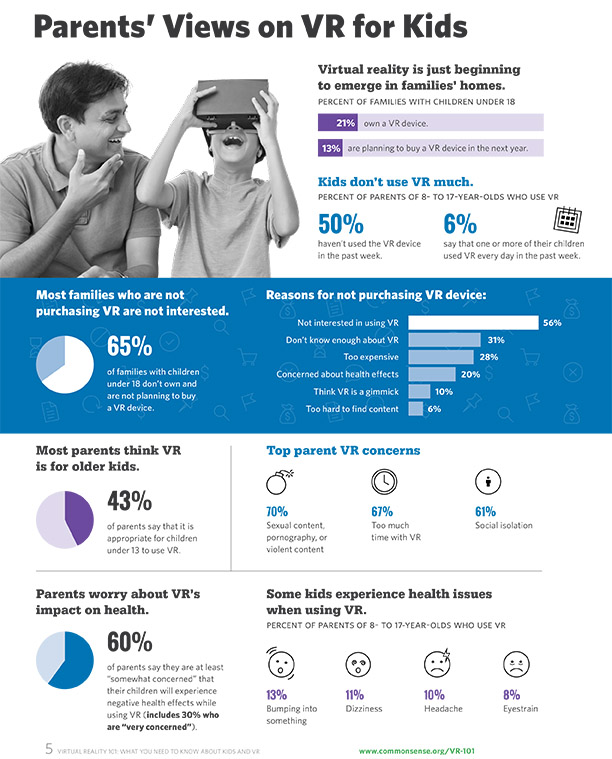 Image from commonsense.org. Some rights reserved.

A Common Sense research in 2018, titled “Virtual Reality 101: What You Need to Know About Kids and VR,” helps bring clarity by summing up the existing body of studies. The report was co-authored with researchers at Stanford University’s Virtual Human Interaction Lab. Virtual Reality 101 “explores the potential positive and negative effects of VR experiences on kids’ cognitive, social, and physical well-being and its potential to shape young people’s perspectives.” It pays to understand the risks and benefits of VR. Key findings of the paper show:

2. The long-term effects of children’s use of immersive VR on their still-developing brains and health are unknown, but most parents are concerned, and experts advocate moderation and supervision.

3. Only one in five US parents (21 percent) today report living in a household with VR, and the majority (65 percent) are not planning to purchase VR hardware. However, the interest levels of US children are high, while parent interest is mixed.

4. Characters in VR may be influential on young children, even more so than characters on TV or computers. This can be good or bad depending on the influence.

5. Students often feel more enthusiasm for learning while using VR, but they do not necessarily learn more through VR than through video or computer games.

6. VR can potentially be an effective tool for encouraging empathy among children, though most parents are skeptical.

7. When choosing VR content, parents should consider whether they would want their children to have the same experience in the real world. 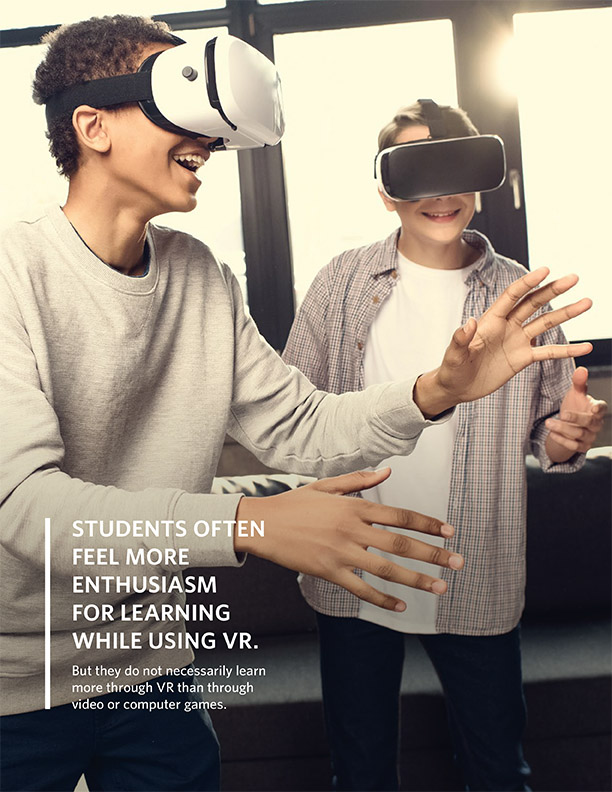 VR is evolving and schools and households will embrace this technology in the coming years. It is critical for parents and educators to understand VR’s dynamic effects, as there are not enough studies on how this immersive medium affects a child’s developing brain. More than half of the parents surveyed in this report said they are at least “somewhat concerned” that their children will experience negative health effects while using VR. There is a need for caution with its usage by young children. VR manufacturers have been careful to recognize that the effects of VR on toddlers and the risks are unknown. Except for VR devices targeted toward child users, most companies suggest that children below 12 years old should not use them. The study recommends that adult participants use VR for only 20 minutes at a time without a break. When the lab studies young kids, they are in VR for five minutes or less at any one time to avoid simulator sickness.

As a parent confronted with the internet and personal computers in the mid-nineties, I prefer that my children read a book, or play volleyball than vegetate in front of the computer. Internet and computers were not available in the classrooms. But I thought the internet can have a place at home and I took the risk of exposing them to this technology before it got introduced in their classrooms. Though I don’t have young kids at home. I continue to immerse in new technologies even buying a standalone virtual reality headset to understand the risks and benefits to children. It can be safe, uplifting and a wonderful part of kids’ lives if spent wisely, together with other balanced and healthy daily activities.

You can download the full report “Virtual Reality 101: What You Need to Know About Kids and VR,” at Commonsensemedia.org. Common Sense is the leading independent nonprofit organization dedicated to helping kids thrive in a world of media and technology.

First published at the Sunday Times & IT on January 13, 2019
149
SHARES
FacebookTwitterSubscribe