Updated May 17 , 2012– I recently appeared on Talkback with Tina Palma on Bullying. This is my updated post on Bullying in Philippine Schools and added the latest Department of Education policy on bullying. 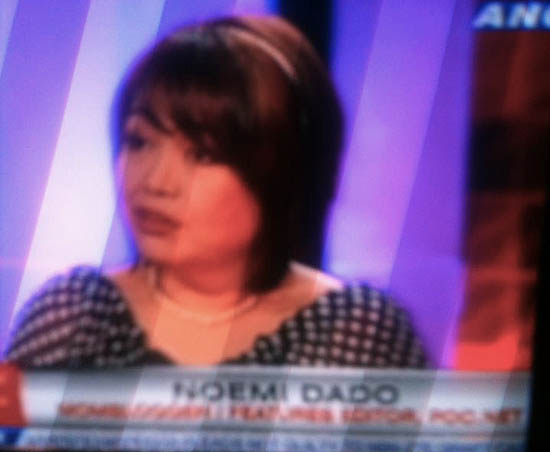 This is a guest post by my daughter, Lauren. I’ve always wanted to tackle the topic of bullying for a long time now since I was so problematic about it during Lauren’s early years at school. The harrowing effects of bullying are best illustrated by the victim. In this case, Lauren tells her story. I attended a private, all-girl schools from elementary up until high school and I can tell you – those were far from the best years of my life. I don’t know if it’s really in my nature to be shy and socially awkward or if my experiences in school turned me into that kind of person. One thing I do know is that a lot of the insecurities I have about myself is rooted in the fact that I got bullied a lot during my early elementary school years.

I can never forget my first bully. Her name is Kathleen and her family owned the school bus service I rode to school and back during my elementary years. We were both in grade one and for some strange reason, she took an instant dislike to me. I have no idea why – I’ve always been a quiet sort of kid who always stood out of other people’s way and I can’t remember doing or saying anything that would make her hate me. But hate me she did. She never beat me up or anything – oh no, girls are way more subtle and cruel than that. She had her own circle of friends and was somehow able to convince them to hate me as well, Going to school every morning and coming home in the late afternoon was a ritual I always dreaded. I got stuck in the worst seat, never got snacks passed my way, and pretty much had to beg the other girls to let me join their games whenever we’d get stuck in traffic.

There were many others after Kathleen – the girls who made fun of me for spending my lunch hours reading in the library, the girls who decided that I had a crush on this other girl and humiliated me about it every chance they got, even a teacher who spent an entire homeroom period picking on me because I got bored one day and felt like passing a survey in class asking if anyone else hates math as much as I do. I’m pretty sure there was more but I must have buried those memories in my subconscious somewhere. I do know that my grades went down drastically, I took to daydreaming and paying little or no attention in class, and wrote my mom a lot of notes about the “terrable days” I would have in school. 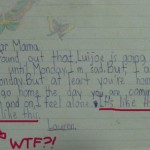 One of the many notes Lauren would write me from school.

Things didn’t get any better for me when I attended high school. I moved to a different school and made the mistake of speaking to my new classmates in English on the first day. For that reason, or whatever other reason, they decided I was weird and I spent the next four years trying and failing to fit in.

I know that my experiences as a bully victim don’t sound particularly traumatizing, but you don’t have to get beat up in the playground to develop emotional scars that stay with you for the rest of your life – especially when the damage is psychological, which is what female bullying is about. Think about it. You’re a little kid, and all you really want is to make friends with the kids you go to school with everyday. Then you find out that not only do your schoolmates reject your attempts at friendship – they also make fun of the most trivial things about you, like the way you speak. You start to wonder if maybe there’s something seriously wrong with you because nobody can seem to like you for the way you are. You start hating yourself and constantly doubting your abilities, and you find it difficult to open up to people and form deep friendships with anyone.

The sad part is that guidance counselors, teachers, and even some parents don’t think much of bullying. They pass it off as play, or maybe an early life lesson: the world can be a terrible place filled with people who will treat you with undeserved cruelty. I do understand that kids have to grow up and learn that hard lesson someday, but I think anyone under the age of ten is too young to deal with that much reality. At that age, it’s important for children to learn to accept or at least respect people for exactly who they are instead of making fun of their differences. What kind of lesson will be passed on to them if their elders shrug off bullying as something totally normal?

Notes from the Mother

No parent wants to see their child get hurt. But according to a recent US study, 77% of students are being bullied mentally, verbally, or physically by their peers. Filipino children are equally exposed to bullying, and are even more at risk since Filipino parents often mistake bullying as a painful, yet necessary, rite of passage. Children who are either bullied or bullies themselvesÃ¢â‚¬â€are suffering from deep emotional scars. Aside from being withdrawn and depressed, victimized children are more likely to drop out of school, take up vices, and get into fights.

Thank goodness, Lauren didn’t drop out of school. The effect on her was mediocre academic performance. I could see the drastic drop starting third grade till I pulled her out of that school in Grade 6. Though intelligent, she was not motivated enough to score high in her tests until she attended college. Only then did Lauren blossom, away from the ravages of shallow high school classmates and their bullying antics.

During her elementary years, I was helpless against the bullying that victimized my sweet and gentle daughter in her School. I talked to the school’s guidance counselor and all she could tell me is that “Lauren had to learn to live with these bullies”. Moving schools was an option but where? Anti-bullying campaign in Philippine Schools was not yet in place in the mid-nineties and even today.

Good news to parents. Be aware . There is now a Department of Education policy to protect children from bullying. A Child Protection Committee (CPC) will be established in all private and public elementary and secondary schools. The committee will be composed of school officials, teachers, parents, students, and a community representative.

(If you want to guest post in my blog, drop me a note with the suggested topic)