Learning to LEAP in digital 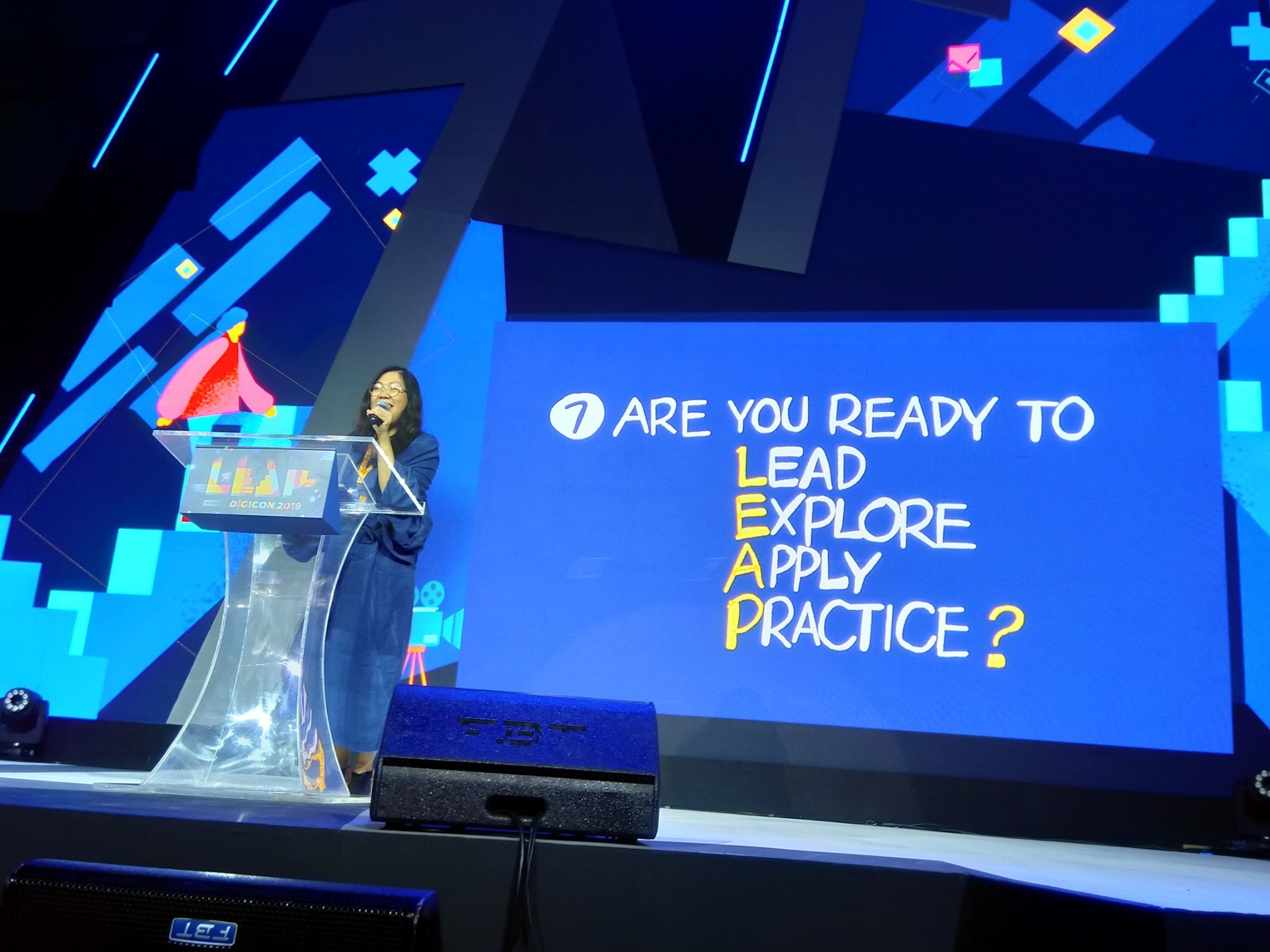 Think about the times they have underestimated you. I remember friends and even relatives looked skeptical about a web page I created 25 years ago. “Why are you even doing that?” they asked me. I shrugged, “it’s something new. I want to learn from it.” Did I foresee the future of Digital? No, and I wish I did. Rather, I wished I had been braver and believed in myself more. I believe though that I learned from being underestimated and continued on despite the skepticism.

Leigh Reyes, co-chairman of DigiCon 2019, introduced the learning process during the Opening Ceremonies. She also presented seven questions for the 3,500 delegates in the plenary hall. What do you need to do to learn?

– Do you know more about the technology than your boss?

– Would you be adding new schools to your CV before 2019 ends?

– Have you yourself invested in learning new skills this year

– Has your company added a new job in the past year — in its core services?

– Could Artificial Intelligence do at least 30 percent of what you do today?

– Are you ready to Lead, Explore, Apply, Practice (LEAP)?

Organized by the Internet and Mobile Marketing Association of the Philippines (Immap), DigiCon adopted LEAP as its theme to solidify its status as the learning and networking experience that unlocks digital marketing excellence for its stakeholders. According to the World Economic Forum, by 2022, the core skills required to perform most roles would change by 42 percent. Imagine knowing your team having only 58 percent of the skills needed to deliver their goals. The 2019 Emerging Jobs in the Philippines Report by LinkedIn stressed that digital competency is in high demand, but so are soft skills. It is better to prepare to evolve than watch the world evolve around you. So, I was there at the DigiCon to continue learning how to LEAP and get inspiration from the keynote speakers.

Wendy Clark, chief executive officer (CEO) of DDB Worldwide in her keynote speech focused on “Bravery, belief and being underestimated,” and how the three B’s helped her career, her agency and brand clients. Curiosity and passion are what’s going to make us brave, she stressed. This is how we’re going to lead. This is how we’re going to challenge and find innovative ways to lead our brands and lead our companies. To be brave, one has to disrupt the status quo. New research from Effie Worldwide uncovers bravery as the biggest differentiator of effective marketing. Traci Alford, president and CEO of Effie Worldwide adds that “if you want to stand out with consumers today, you simply can’t skimp on bravery. The truth is, if you want to create effective work, your safest bet is to take the biggest risk.” 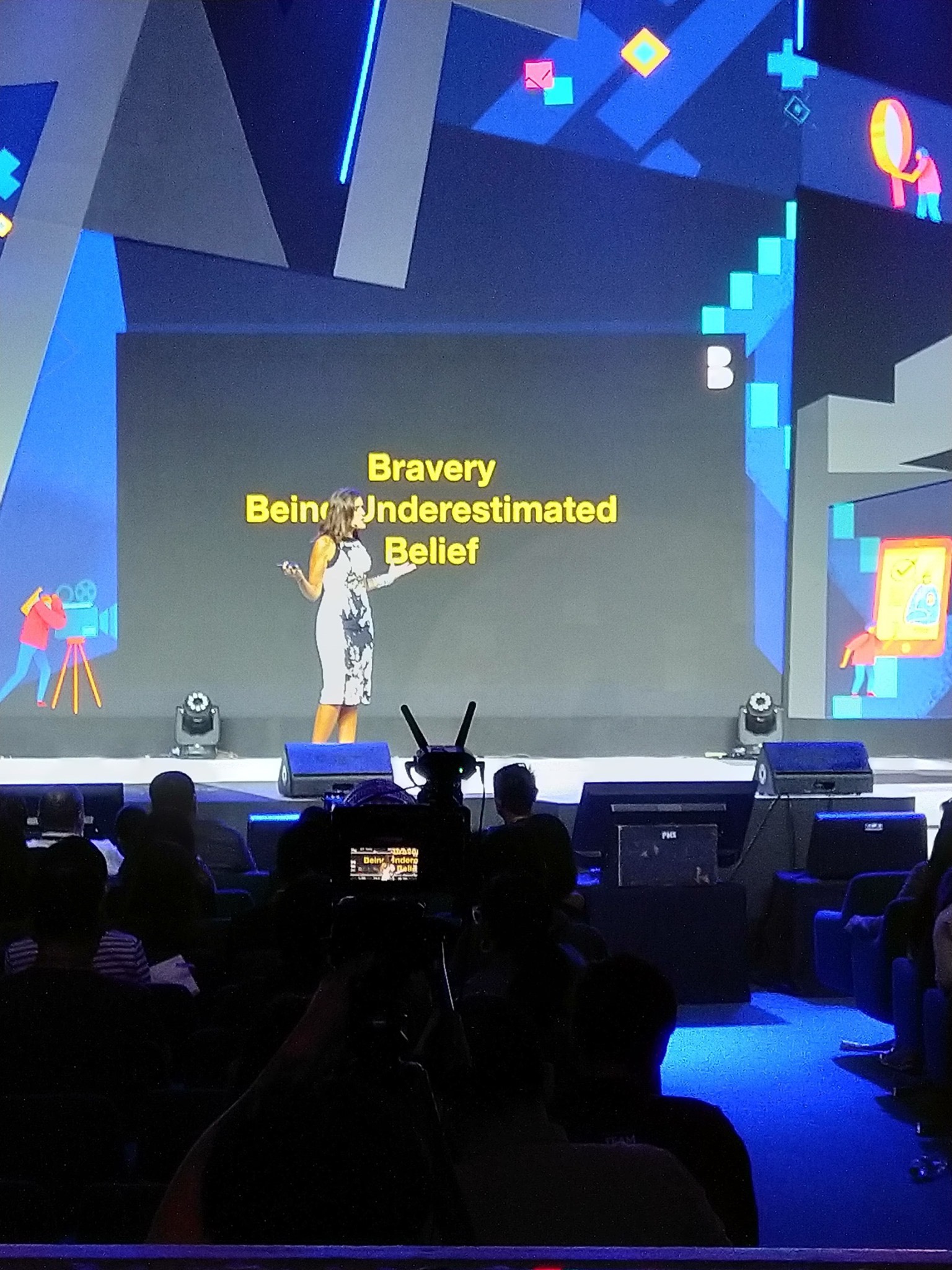 An example of brave work Clark got involved with is Stayfree’s Project Free Period. An insightful campaign gave Indian sex workers alternate livelihood training in the only days they were free — during their period. Another campaign was McDonald’s International Women’s Day to honor the women who comprised 60 percent of their workforce. To celebrate the day, McDonald’s stores flipped their “M” to form a “W.”

I talked to her about learning and being underestimated after her keynote speech. “On the path to learning is a failure. Failure is a bruise, not a tattoo. Too often, as a society and as an industry, we compare failure as a tattoo. It is not permanent. We need to talk of failure in a positive sense. Position it as learning. Use being underestimated as a lever, as a powerful tool. When someone is underestimating you, use the underestimation as a fuel in your tank to achieve what needs to be accomplished. Embrace when someone underestimates you.” She recalls a “famous” failure when she worked at a US mobile phone company in the nineties. When Nokia approached her about the camera phone, she told them that “people would never use their phones for cameras. Phones are for talking and are for phone calls. I mean, I couldn’t see it.”

Clark laughs at it now but remembers her old boss, that “it is okay to fail once. It’s not okay to fail twice at the same thing.” Why? It means you don’t have a learning organization. Failure needs to be demystified. We need to position failure into learning. The DigiCon cochairman affirms that in learning, “reinvention cannot happen without learning, doing, learning again, doing again, learning more things, resting in between and then you keep learning.” In learning to LEAP in digital I know I need to be brave, hold on to my beliefs and that being underestimated is part of the territory.