According to this article, on Childhood obesity problem:

“Global fattening” poses an equal threat to global warming, according to obesity specialists.

Overeating has resulted in 20,000 children suffering from so called “adult onset” or type-2 [tag]diabetes, not previously seen in children, while more than 400,000 have impaired glucose tolerance, a pre-diabetic stage which puts them at sharply increased risk of the condition.

A year ago, I was borderline obese at 163 pounds. Today, I’m 129 pounds. I lost 34 pounds in seven months. Aside from health reasons, I decided to lose weight because I love my girls. I don’t want to set myself as a role model of a mom who turns obese in their forties. Most of all, I don’t want them to acquire diabetes.

I sound like some advertisement of a weight reducing salon or [tag]diet pill[/tag]. Hehe.

I’m not too proud of the fact that I became borderline obese but if you’re struggling with overweight problems at past 40 years old, there is hope. I’m just showing these pics so that you won’t give up. 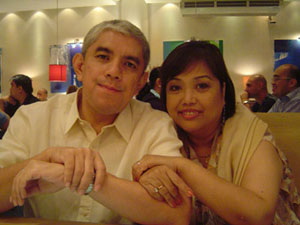 If I don’t look too fat there, here are more fat pics of me 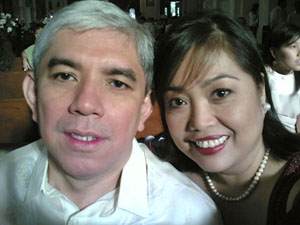 What did I do?

1. Enrolled at Fitness First. I go to the gym almost everyday.

2. Southbeach diet with a twist. I ate whatever was served on the table.

3. Since I am diabetic, I take snacks in between meals. Snacks are usually high glycemic foods such as nuts.

Let me tell you how frustrating it was to lose weight during the first few weeks. Inspite of the strict diet and exercise, I lost only a measly 3 pounds for the first two weeks. The fat cells just refused to burn. The forties are indeed the troubled years because for some reason my body doesn’t want to obey me anymore. After the birth of my two girls, and in my early 30’s , I lost the pregnancy weight gain in a few weeks.

But I thought eventually these fat cells would start burning. My concentration was focused on having a healthy body. I also decided not to weigh myself until someone would say:

And that didn’t happen until 3 months later. I was excited. I squealed with delight. Finally someone outside the family (your family won’t notice because they see you everyday) noticed. When I weighed myself, I saw that I had lost 20 pounds. Finally…

Now there is a twist to my weight loss story. I fractured my leg on July 2, 2005. But I’ll talk about that in another entry.

My endocrinologist wants me to lose 10 more pounds. Ahh! That is my next project because losing the next 10 pounds is even more difficult without getting hypoglycemic.