I never realized the value my children placed on their toys until M. interviewed me for her research paper a few years ago on “Toys and Games I played with” for her Psychology course.

She said “Thank God mom for the girly and not so girly toys”.

In this day of digital toys and gadgets, I believe parents should never forget that the best toys for children are ‘open-ended’. Such toys encourage children to play using imagination, creativity and problem-solving skills such as

blocks – one day your child uses them to build a tower, and the next day he might bring the block up to his ear and pretend it’s a phone

cardboard boxes – these can stand in for so many things, including pretend shop counters, ovens, cars, boats and doll houses

dress-ups-  with some hand-me-down clothes and bits of fabric, your child can become anything or anyone he likes

crafty bits and pieces – coloured paper, stickers, crayons and washable markers can get your child started on a masterwork.

I recall my childhood days and the fun my siblings and I had when we used a chair as our “car”. We pretended the carton box of the refrigerator was a small doll house.

I chose their toys wisely because we didn’t have substantial income when the kids were younger. My husband was still at Law School when the 2 girls were born. I bought toys that nurtured their imagination and creativity. Whether it was toys classified for boys or for girls, I chose it for its educational value. L. and M. loved Lego blocks. They had lots and lots of LEGO blocks. They had the larger DUPLO blocks when they were toddlers. At that time. Lego was sold in disassembled bricks, so they were free to create any figures their young minds could imagine. Even until the age of 9, they spent all afternoon ignoring their Barbie dolls and instead built fortresses, houses, schools and whatnot. No wonder, I gave the Barbie Dolls away to my younger nieces. It was gathering dust.

At the age of 5 or 6, I bought Polly Pockets during a trip to Hongkong’s Toys-R-US. Polly Pockets were cute tiny boxes that fit in my girl’s tiny pockets. Inside contained a miniature house with a miniature doll slightly larger than a nail. Each house was unique. I bought 7 of those and the girls created a little village. I still kept these toys and I just found out they are valuable today. But I noticed the entire population of the village was female. Until Max moved into the neighborhood. 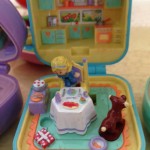 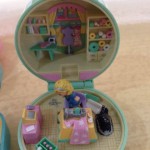 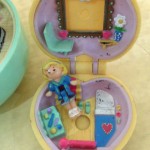 Mighty Max shared the same concept with Polly, pocket-sized and tiny, except that instead of pianists and dressmakers, Max was an adventurous young boy who always had to free himself from the clutches of mummies and zombies. So instead of a normal house or bathroom, Mighty Max was contained in a dungeon, a mad scientist lab or an Egyptian tomb. Instead of a pet cat or dog, he had the undead chasing after him. Max had many possible things going on for him: he could get stuck in a trap, locked in a jail cell, trapped to the other end of the wall, find secret pathways leading to treasure basically, he led a more exciting life than Polly.

When M. was in nursery, she told her girl classmate about all the adventures she had with her Legos.

My girls never looked at it that way at all. Today whenever they pass by a toy store, or when they visit their younger cousins, they can’t help noticing that little girls today don’t play as much Lego blocks as they did. As a child it didn’t matter to them if the games they played were masculine or feminine, as long as it provided hours and hours of fun and creativity.

One tip to know: “The way your child uses a toy is often far more important than the toy itself in determining the toy’s effects on your child’s development. Thinking about how your child might play with the toy can help you decide whether it’s the right one for you and your child.”