Marc Macalua saw someone selling his stolen Macbook Pro on PhilMUG and various for-sale sites. After pointing this out to the poster, user djwoblely, who was identified as Ryan Soriano, a meeting to retrieve the laptop was arranged. Unfortunately, Mr. Soriano was a no-show for the March 24 meeting.

News on losing a laptop or a gadget does not really hit me as hard as when a friend is the victim. In just a span of a week, three of my friends were victimized. Let’s hear their stories.

1. Liz post on Be Paranoid: Car Robberies at The Podium and The Fort where three laptops were stolen from a car trunk on Friday the 13th.

Last night, Marco lost his new Macbook Pro, which he got not more than a month ago for P100,000. He left it in the car trunk of a friend, which was parked by The Podium in Ortigas. They left the parking lot at 9pm for dinner and came back 1am which is when they discovered that the trunk was broken in and three laptops were stolen, including his friend’s Macbook Air (this sells for P80,000 each) and a Dell laptop .

How I Survived The Amazing Race at Island Cove

Have you ever dreamt of being a winner, racing on to the finish line? One of my favorite shows is the Amazing Race. Whenever I see the contestants running from one stop to the next, I feel like I am hanging on the edge of my seat . A wave of adrenalin hits me as if I am right there with them. Even if I know I will never be qualified to join , my mind conjures up scenarios that I am actually rushing to the next stop. I want to be there. Yes, it is my dream to win in a race.

Though Amazing Race is a far-fetched dream, it does not stop me from taking up physical challenges. The Detour: The Island Cove Adventure sponsored by Yehey and Island Cove was a perfect opportunity. Can I really make it?

Read More »How I Survived The Amazing Race at Island Cove

Bloggers, a meet and greet with BB Gandanghari is all set but please sign up below the cut as the invitations are limited:

Parenting, Blogging and Our Love Story in Net 25 MOMents

I groaned. Not another show. I felt there are many wonderful moms out there who are so much better than me but Net 25 MOMents was persistent. They said the show is for mothers and kids that feature the different bonding moments, child-rearing styles and the many facets of motherhood. I felt like it has been ages since I have actually been a hands-on mom. I have long since enjoyed my independence from child-rearing since the girls turned 20. What could I possibly offer to the MOMents feature? 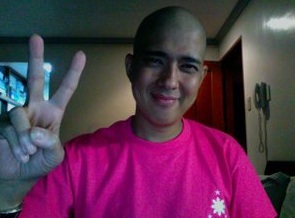 Francis Magalona Succumbs to Cancer at the age of 44 at the Medical City Hospital after a 7 month battle with AML (Acute Myelogenous Leukemia with Mixed Lineage) or MLL. Francis died due to multiple organ failure ““secondary to severe sepsis and secondary to pneumonia,” according to a doctor who was not authorized to talk to media.

The Grief of The Invisible Class

A paragraph in Manolo ‘s entry on The Long View Insecurity and The Invisible Class caught my eye:

And meanwhile, there continue the biting criticisms. Blogger Caffeinesparks puts it this way, reacting to the outpouring of sympathy and shock over the death of Amiel Alcantara, the child accidentally run over in Ateneo de Manila: ““in the shanties along Pasig river, a kid playing falls into the waterÃ¢â‚¬â€drowned. Dead; a street urchin playing on the island along the road, runs after a kitten, gets run overÃ¢â‚¬â€dead; babies die because their mothers live too far from health care centers or can only afford a manghihilot; 10 mothers dead a dayÃ¢â‚¬â€due to childbirth.” These are the grim and unnoticed statisticsÃ¢â‚¬â€so plentiful as to be unfeltÃ¢â‚¬â€of what she calls the Invisible Class.

Why is it a biting criticism? If the blogger had access to the mortality statistics, why not write about it instead of criticizing the sympathy showered over Amiel Alcantara’s death? And perhaps, take it from there?

Read More »The Grief of The Invisible Class