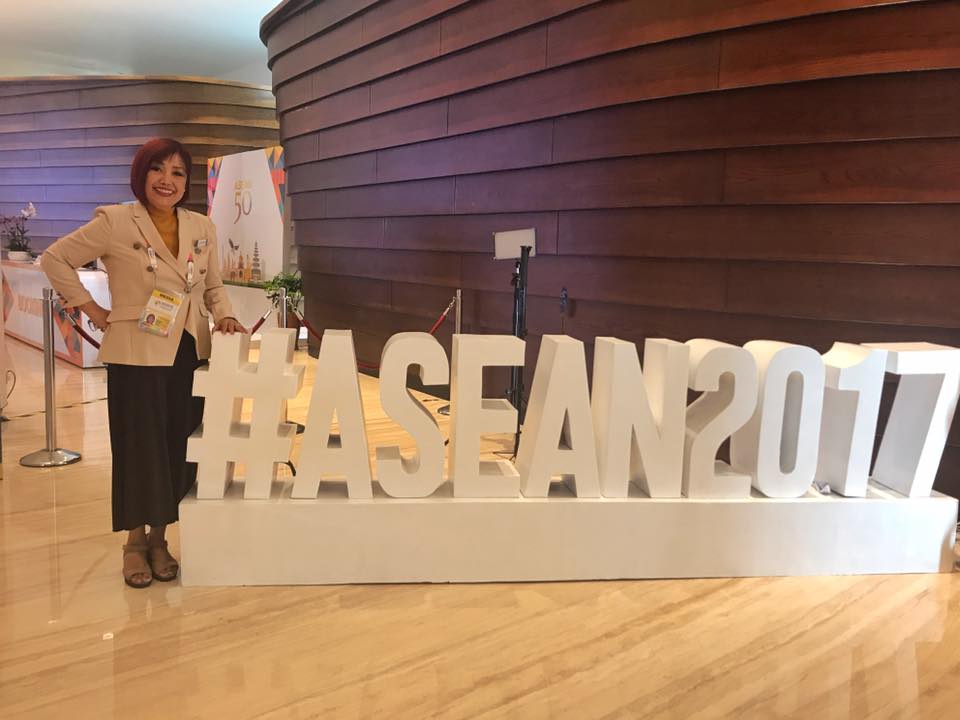 Updated  August 7, 2017: I first wrote this last May . I  updated this blog post to add the media accreditation for the ASEAN 50th anniversary celebration

Some of you have probably noticed I’ve been tweeting a lot about ASEAN 2017 since January this year. It is part of my work as senior consultant for the Committee on Media Affairs and Strategic Communications, led by the Presidential Communications Operations Office (PCOO). Finally, the first big event , the ASEAN 30th Summit and Related Meetings finally happened. This is it!

Before I write about my views on the statements released by ASEAN , let me share my experience covering the summit. 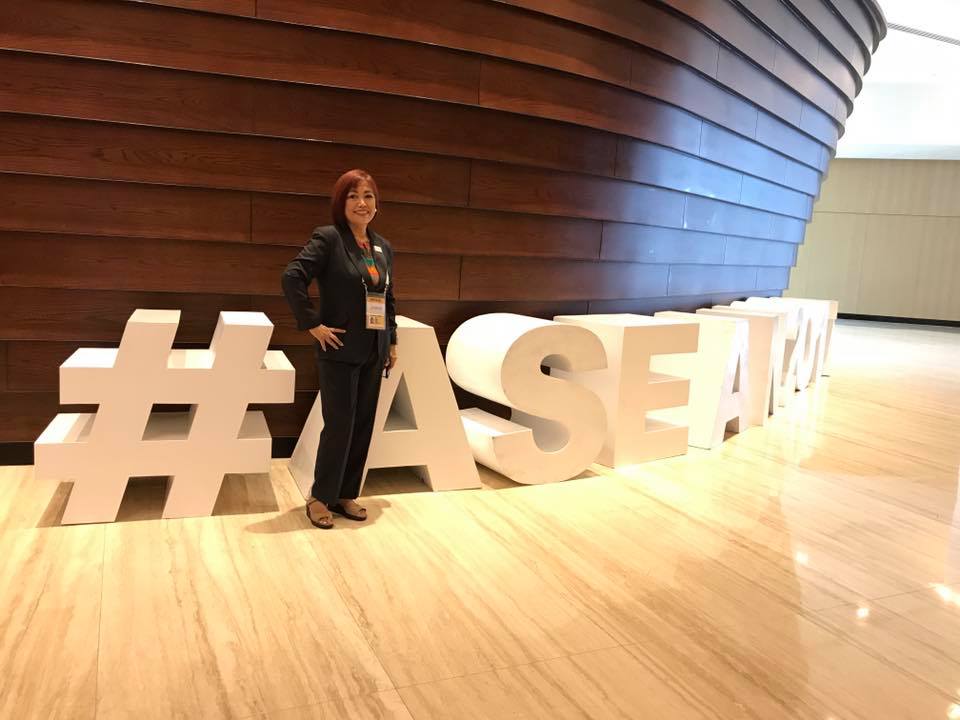 Read my other articles on ASEAN:

– ASEAN beyond 50: What does the future hold for the youth?

– Opportunities and challenges of women in the ASEAN

– 10 opportunities and benefits for the citizens in ASEAN

– Opportunities for your children in the ASEAN

– ASEAN, a region of opportunities for the citizens

It’s my first time as a blogger  to cover an international event. I applied for the Asia-Pacific Economic Cooperation (APEC) Economic Leaders’ Meeting held on 18–19 November 2015 in Manila but it was revoked at the last minute.  Don’t look at me.

This time around, bloggers got accredited to cover the Association of Southeast Asian Nations (ASEAN) 30th Summit. The thing is, I could not cover the meetings just like the rest of the media due to security reasons and also because we were more than 1,400 . There was an information channel, email blast , international broadcast center, and press releases . Nothing beats being right there at  an event and I will get to that experience in a bit.

Like the past media accreditation for ASEAN , I had to sign up at the Asean2017.ph website. The registration is buggy. I had to repeat the process all over again and then I get this duplicate record

As to the agency I represent, I put Blog Watch and wrote a letter of request which I needed to be attached in the form. Within 24 hours, I received a confirmation. 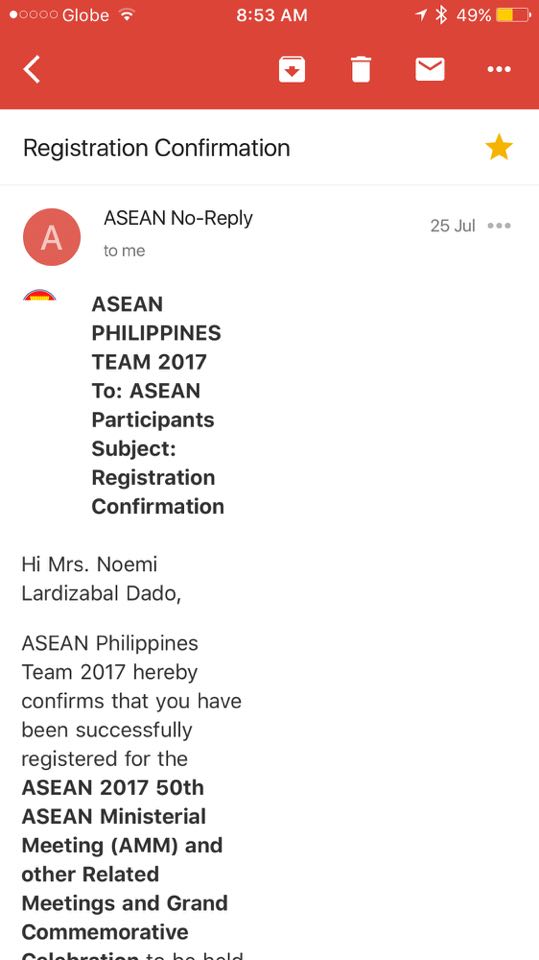 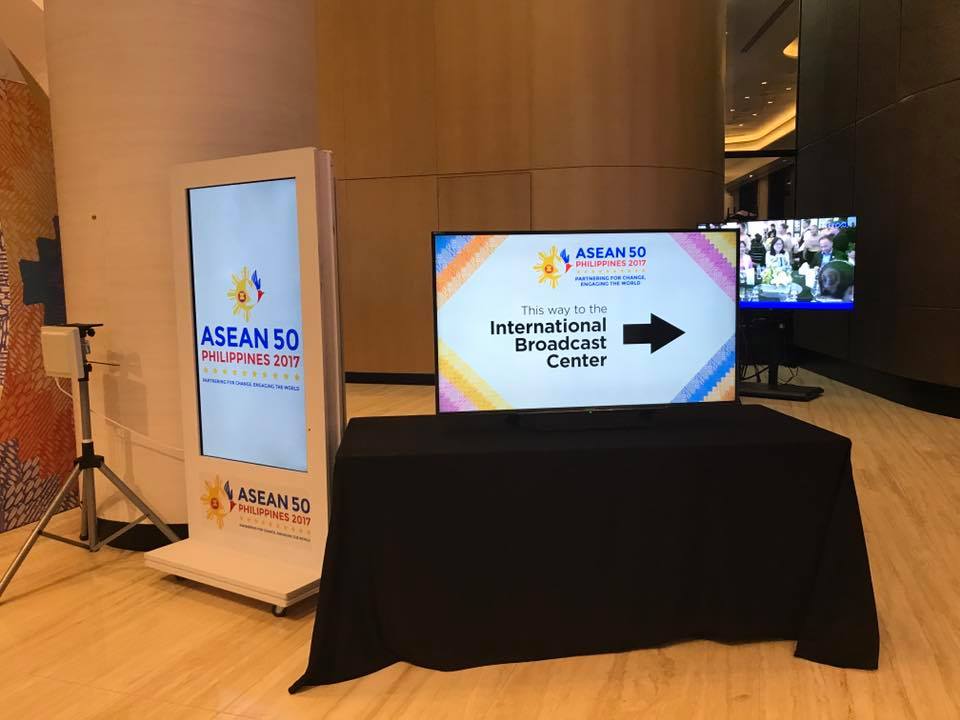 The International Media Center was something new for me. 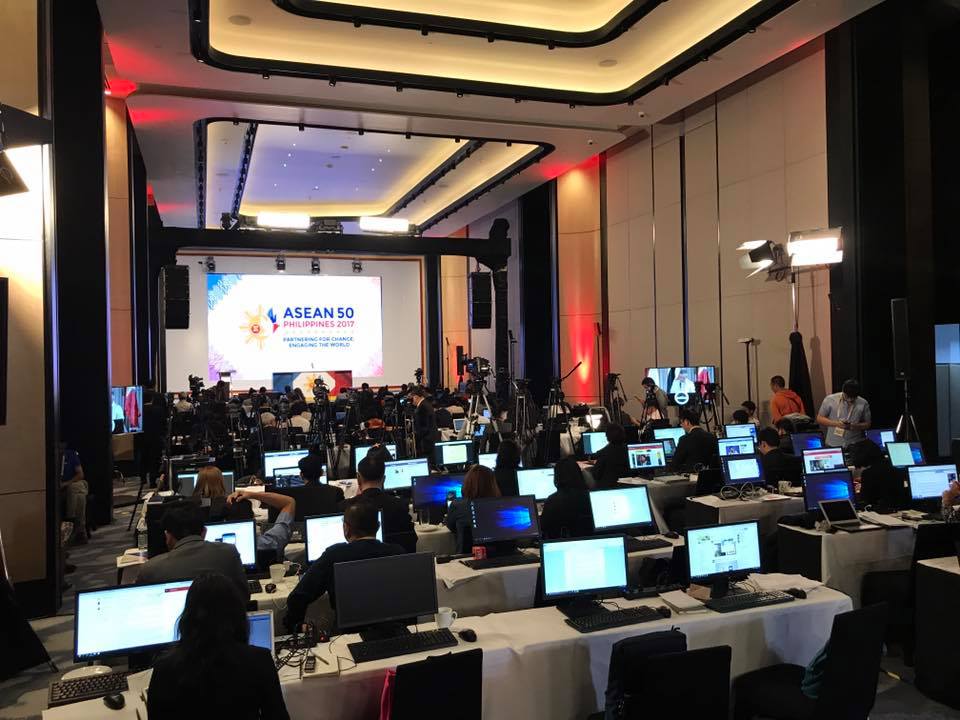 Fortunately, those without laptops had desktops for their use at the main briefing room.  Each table had a charging station for our gadgets. 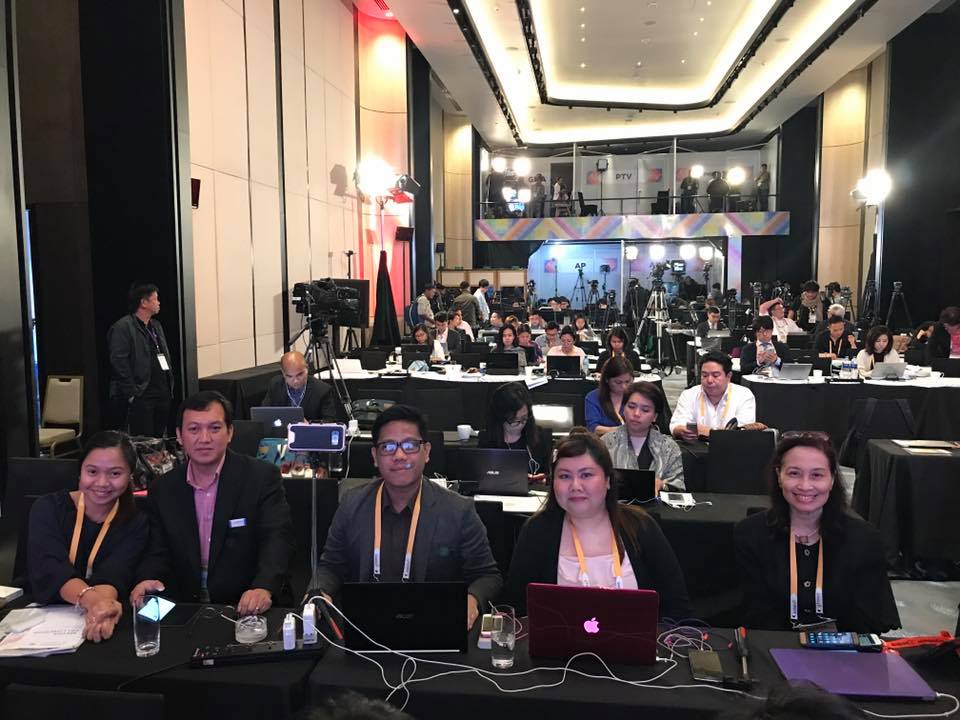 The social media lounge was for everyone to use , especially for those that didn’t bring their laptops…or when their laptops died from overuse. 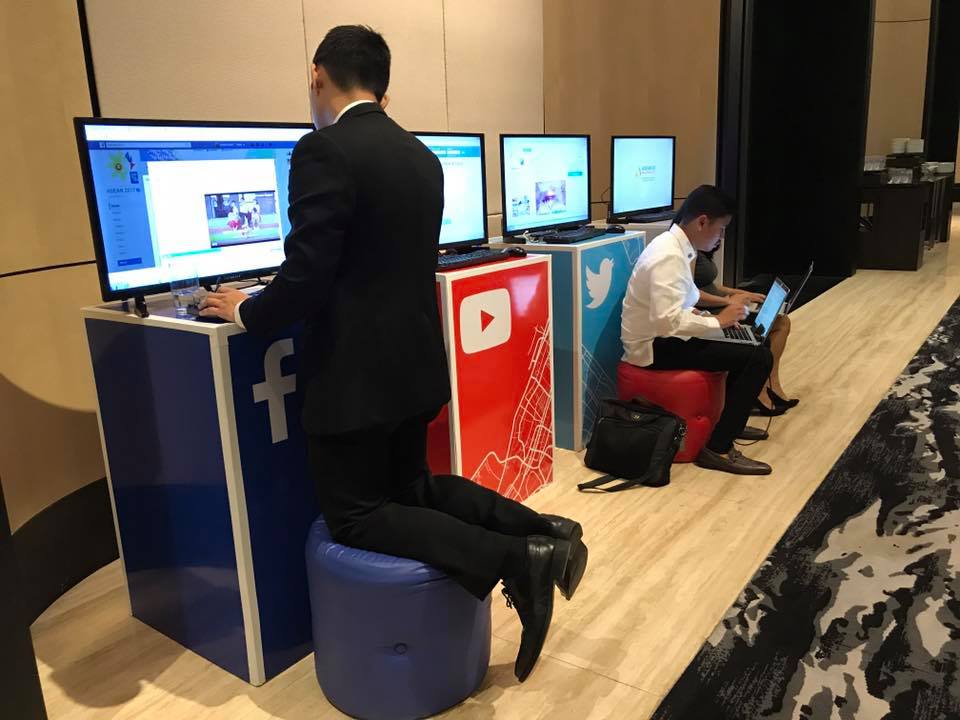 It was the place to chit-chat, sip coffee  and socialize as the main briefing room is meant for writing in peace and quiet.

READ : Notes on ASEAN Summit 2017, Part I: My Personal Story 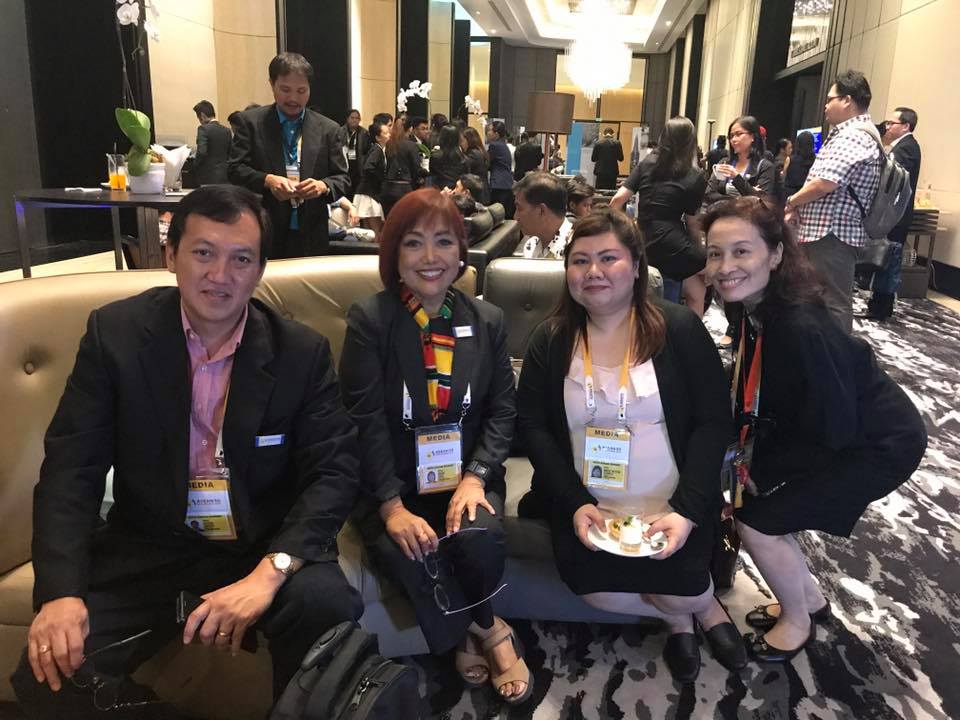 The  RFID card was or the Radio-Frequency IDentification is so cool. I think everyone stopped to get their photo taken. Awesome, isn’t it? 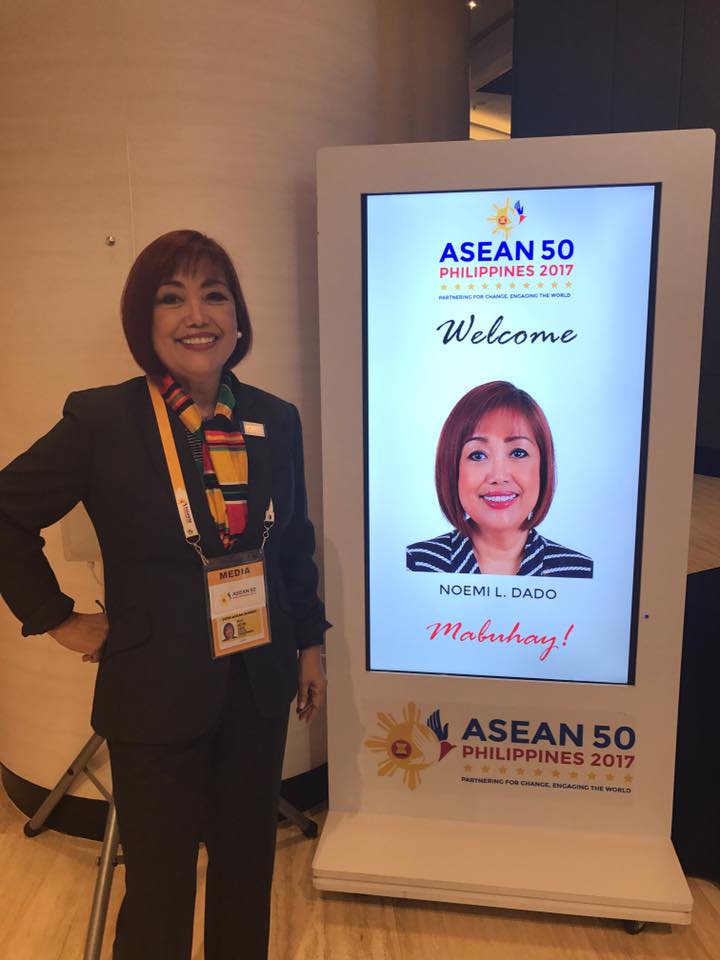 One needed to sign up at the Information desk for Pool Coverage . I was fortunate to get a slot to take photos till the Opening statement of the ASEAN Foreign Ministers Meeting . 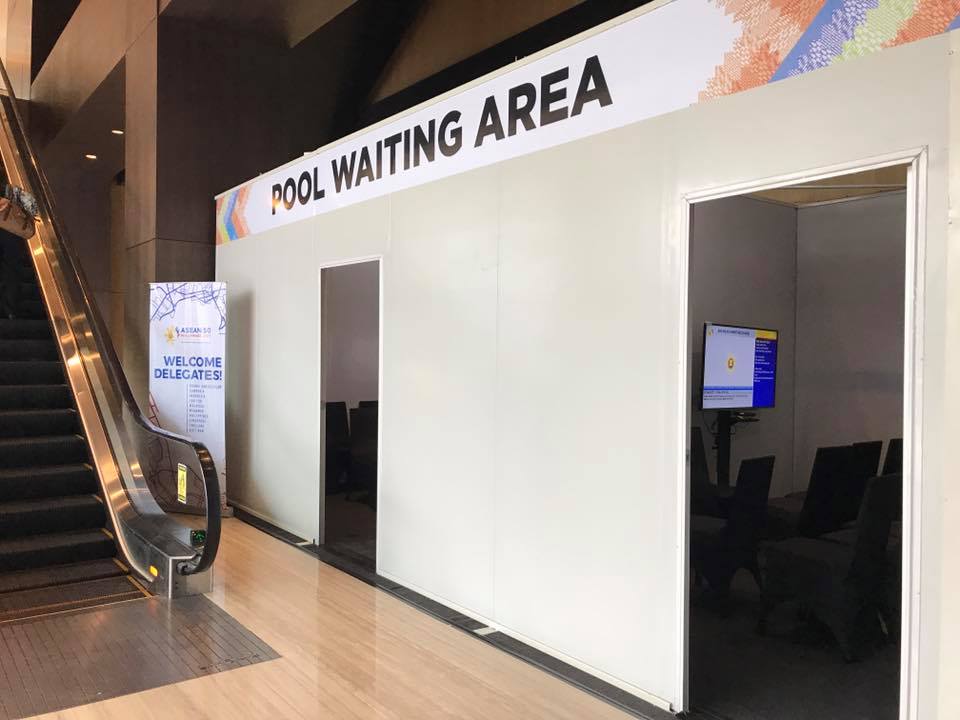 A van took the photographers and social media practitioners like myself from the Pool Waiting area to the Philippine International Convention Center (PICC).  The thing is I don’t carry huge gadgets like those professional DSLR and a step ladder so I am told to step back to give way to them. 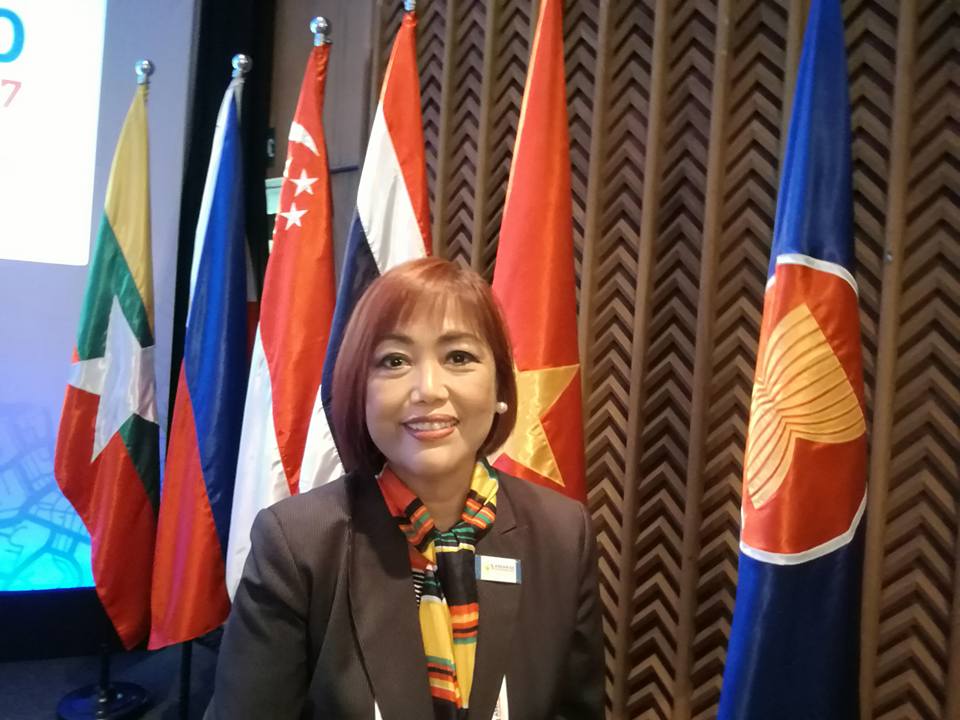 This is why my photo of the ASEAN Foreign Ministers is not taken from the center. Hmm, maybe I should bring my humongous DSLR next time just so I get a better view. The iPhone7 Plus has an excellent  zoom feature so I managed to get a shot of Acting Foreign Secretary Manalo in his Opening Statement. 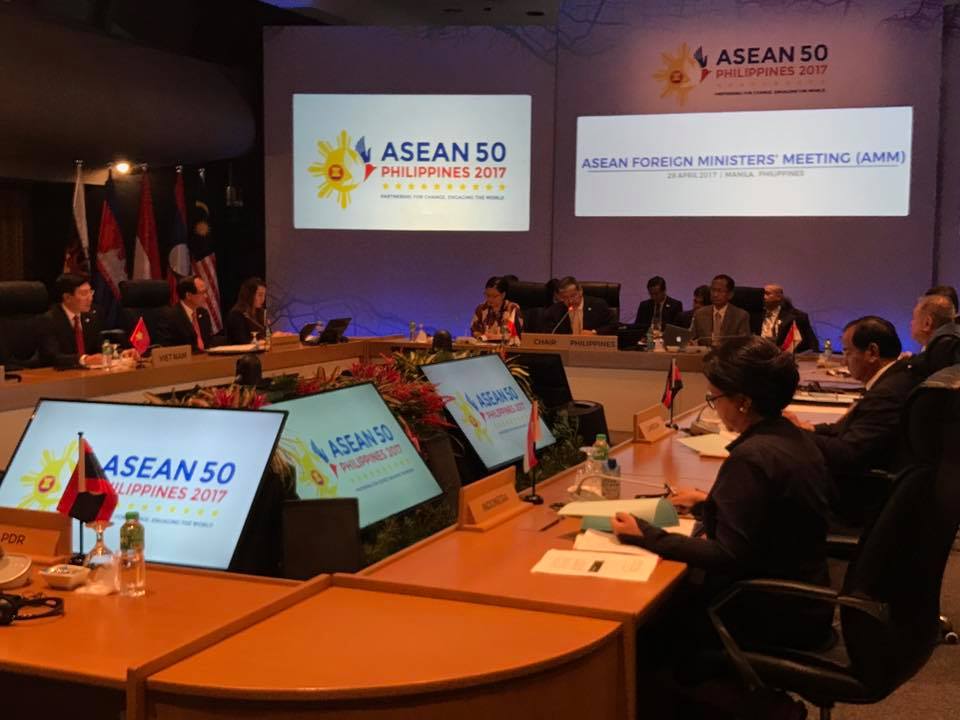 The ASEAN foreign ministers released a statement shortly after their meeting.

“ASEAN is mindful that instability in the Korean Peninsula seriously impacts the region and beyond.”

What a strong statement but silent on China? 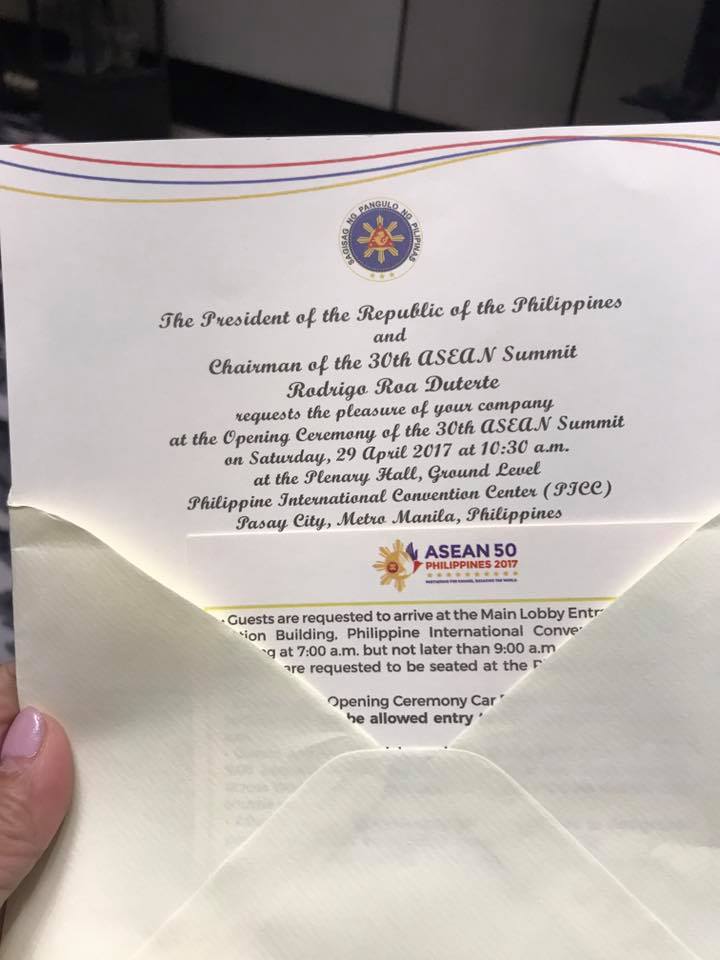 A shuttle  brought us to the International Media Center to PICC. 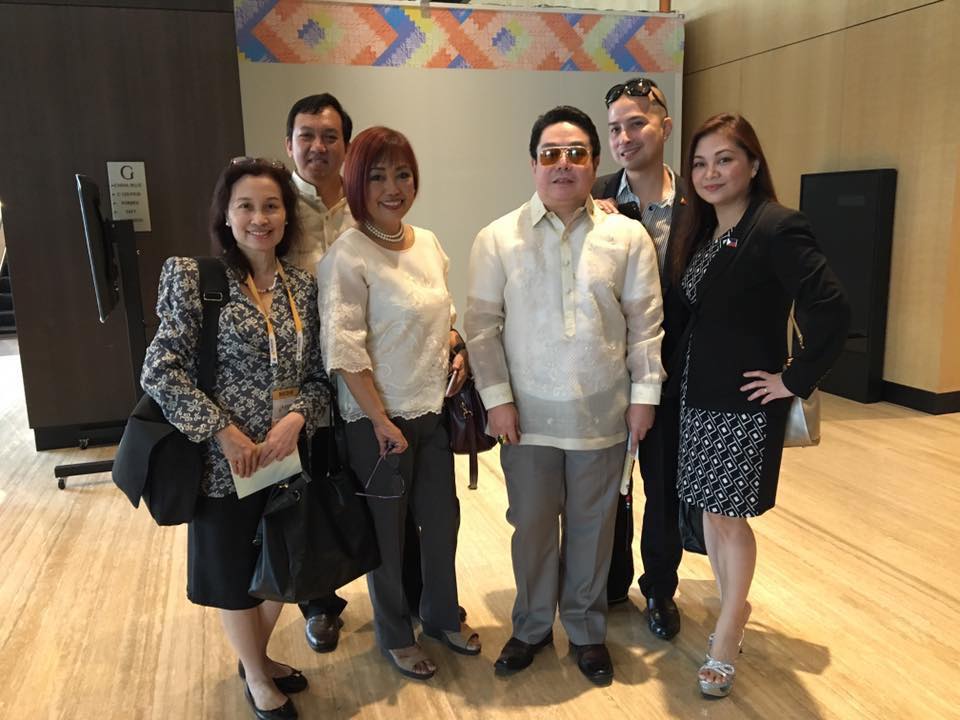 Yes, it felt like a fiesta with all the dancers at the lobby. 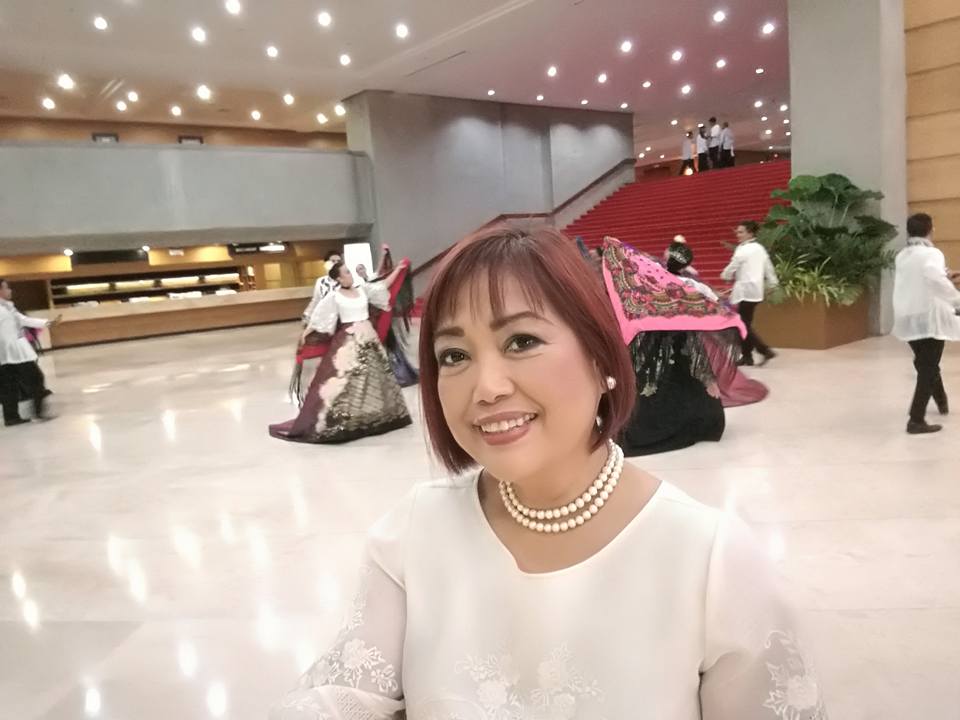 Everyone had to be inside the PICC by 9:00 AM even if the Opening Ceremony would start  at 10:30 AM.  I understand all these security precautions for the sake of our  10 Asean leaders and even for us, the audience. 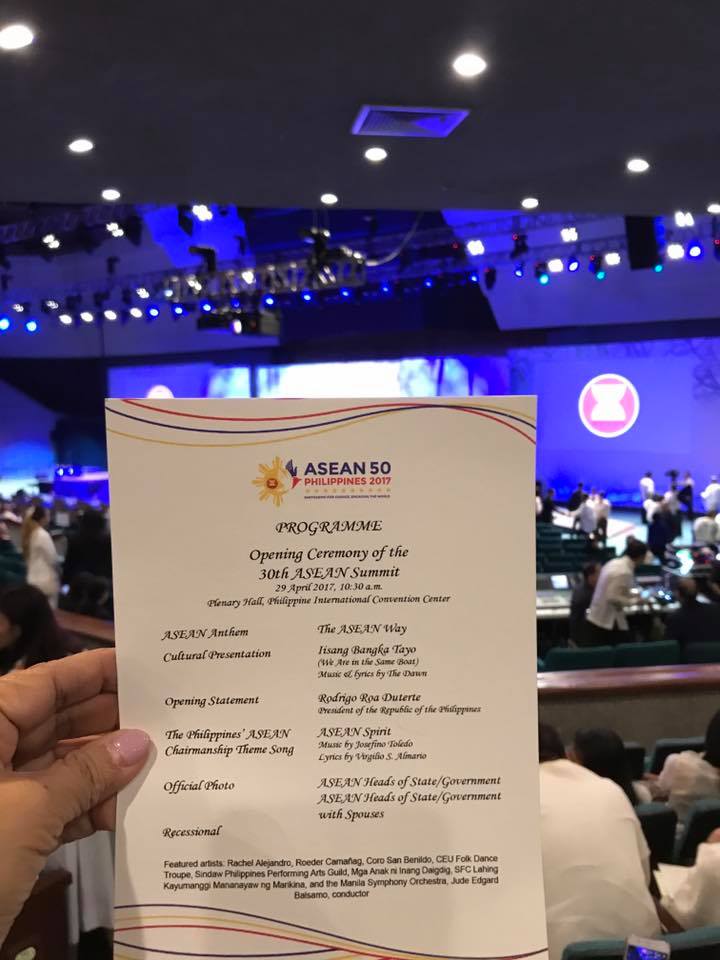 I was early enough because the shuttle took me there around 7:30 AM. The President then delivered his Opening Statement where he emphasized the importance of unity, solidarity, and cooperation among the ASEAN member states.

What stood out is that ASEAN leaders be resolute in achieving a drug-free ASEAN which I hope puts an end to killings and that the drug lords are caught  and charged. 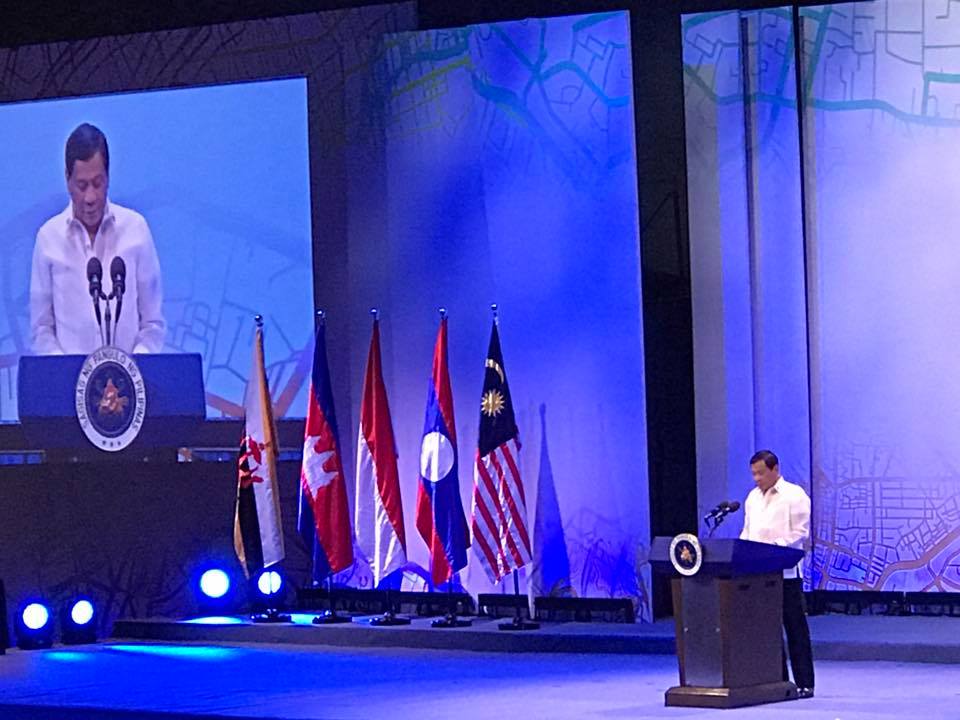 Before the family photo was taken, the ASEAN spirit was sung accompanied by a beautiful dance number. I took this live on facebook and a lot of viewers enjoyed the scene. With my left hand on my iPhone taking the video , I used my right hand to take photos. Notice the shakiness of my live video. It still got a modest number of hits .

This is such a historical moment for me, seeing all the 10 ASEAN leaders. 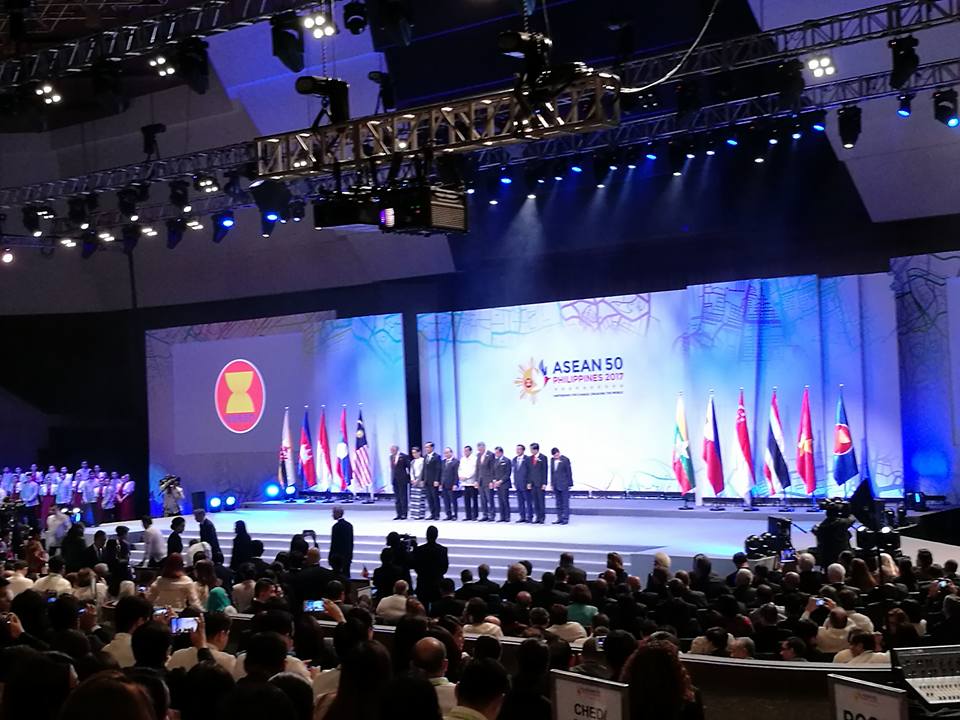 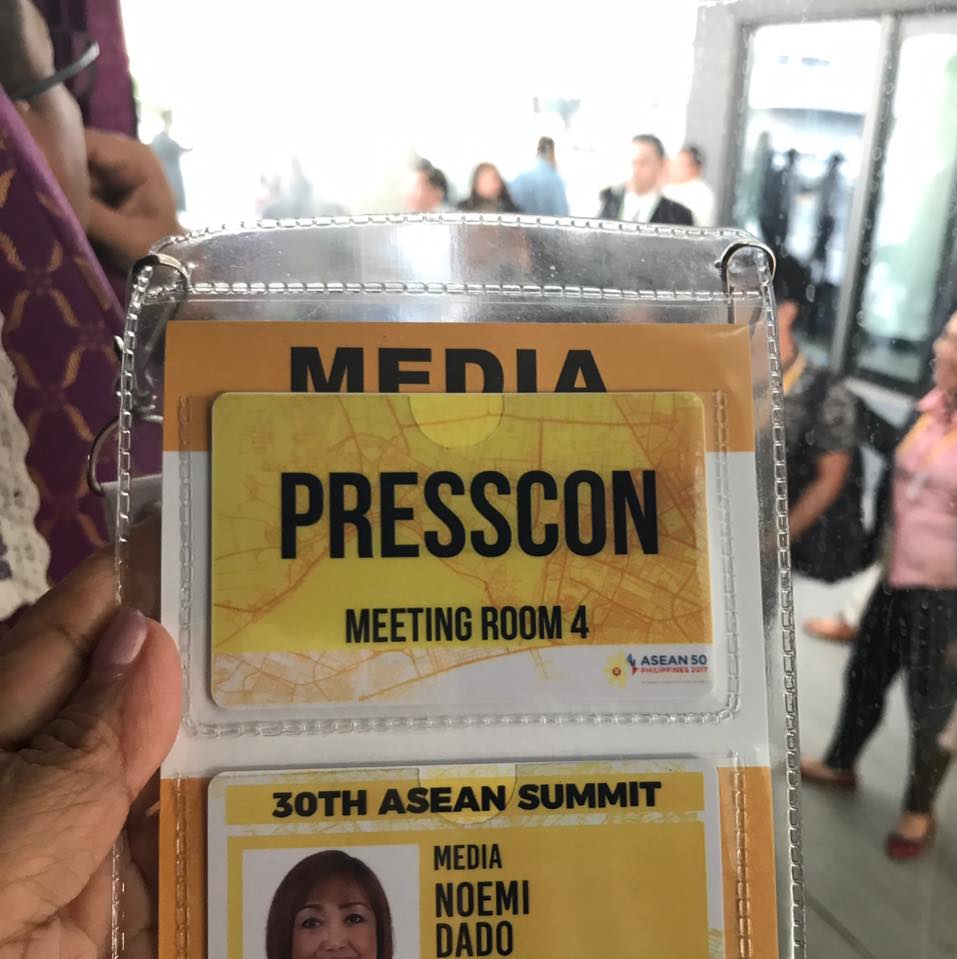 The press conference schedule was  at 7:10 PM but by 5:00 PM, we were brought to the PICC holding area. One line was formed for reporters while the other line for photographers and videographers before we could walk out towards the PICC Meeting room. 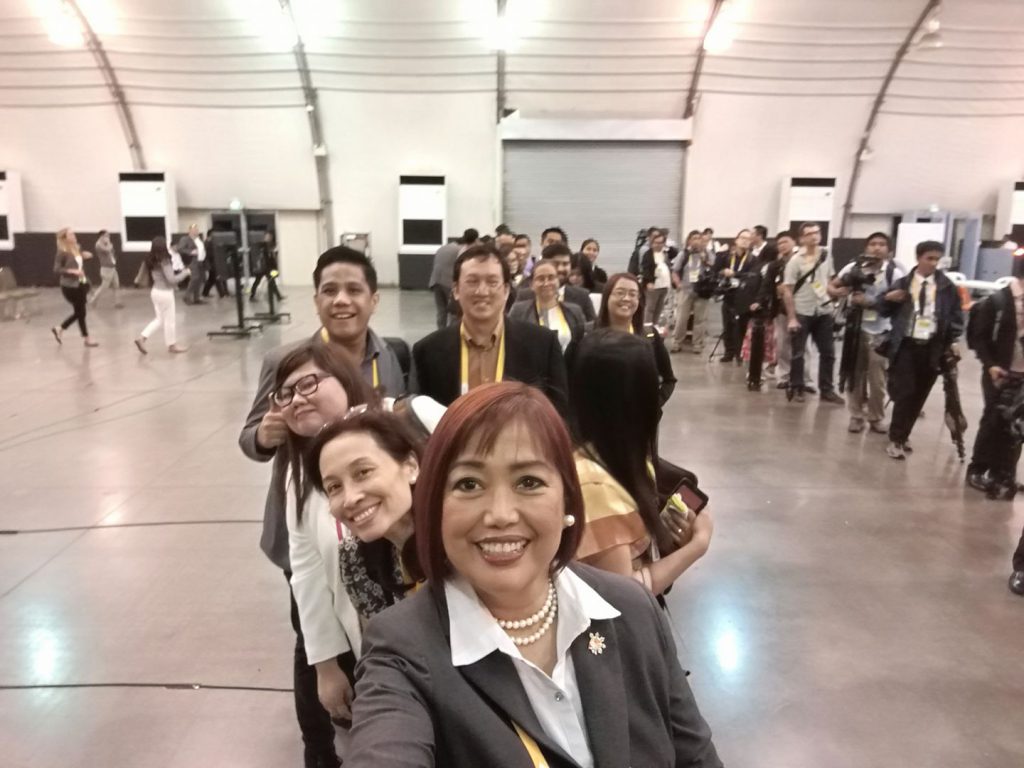 The bloggers got a good position just a row behind the seats assigned to the government officials. 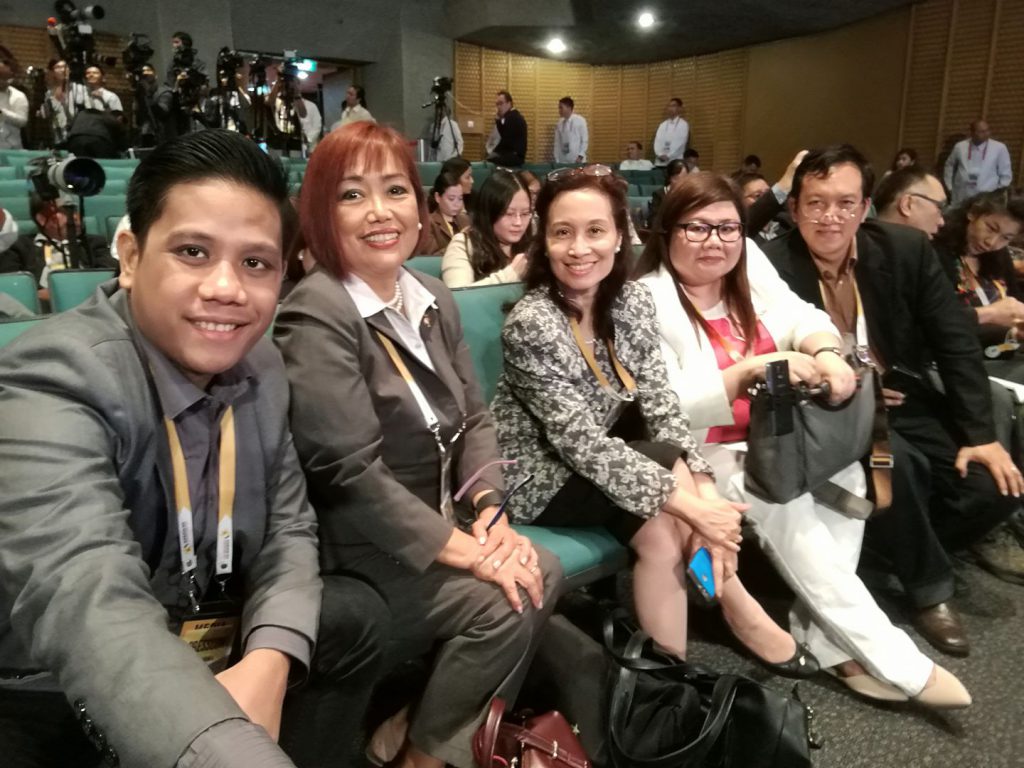 The President arrived late , and was probably tired but he mustered to say in jest, “Anak ka ng… Kung ganito lang ang summit, kanselado na ‘yung sa November (If summits are like this, then let’s just cancel the one in November)” 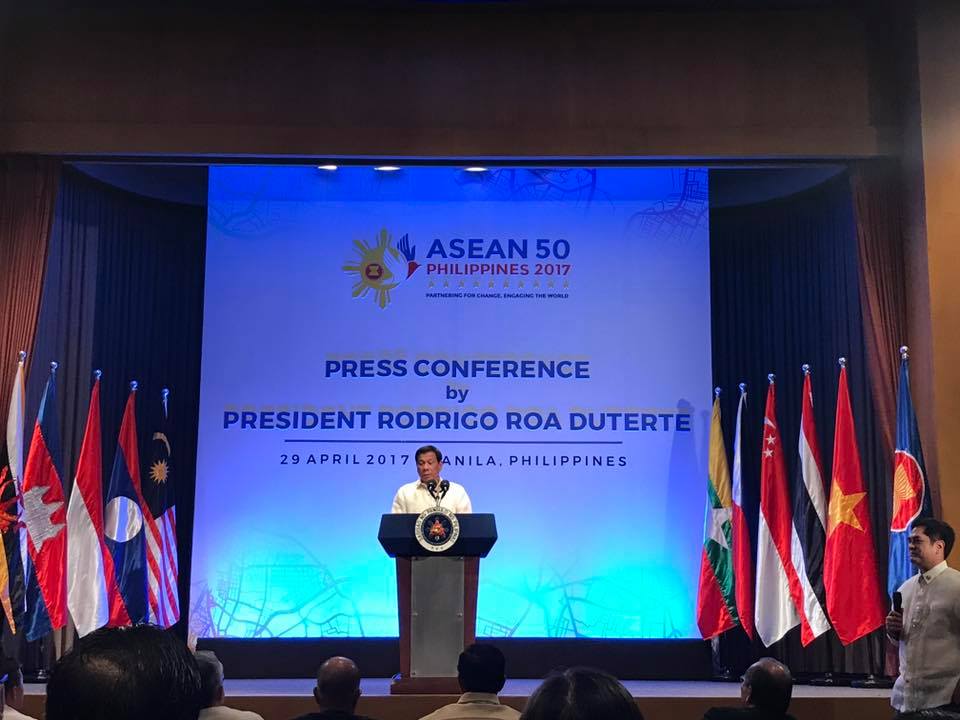 The President then  read a prepared statement but he seemed eager  for the questions from the media. He appeared to be in high spirits with the press that  Saturday night, “even joking that the media should have been invited to the gala dinner with ASEAN leaders and other dignitaries.”

Here is a video of the press conference:

His guests at the Gala dinner were waiting for him so he cut short his press conference . We only had 30 minutes. He had already left the podium but went back to announce that women can have their photos taken with him.

“I am not trying to be a show-off, but I’ve noticed that after every conference, a lot of mostly women would want to have a picture with me. Women, come up and we’ll have the pictures”

I thought he was kidding.  Of course, I wanted a photo with the President. For Prosperity’s sake just as I had the chance with four past Philippine presidents. (The next day , I was surprised our selfies  got featured on page 4 of the Philippine Inquirer) 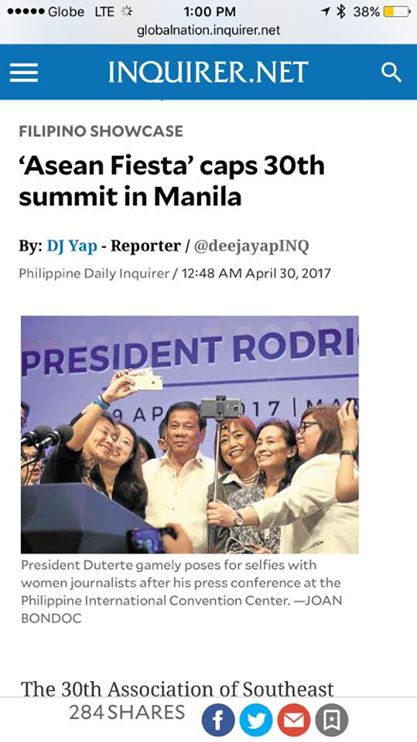 Lastly ,  not all media got the same giveaways and bag . An Inquirer reporter made such a big deal out of it.   There was another bag distributed to “others” and no phone was in it. Instead, a USB charging/power port was in the bag along with a  notebook and pen, dried mangoes, utility bag and a bamboo speaker. PCOO explains the giveaways in a press statement. 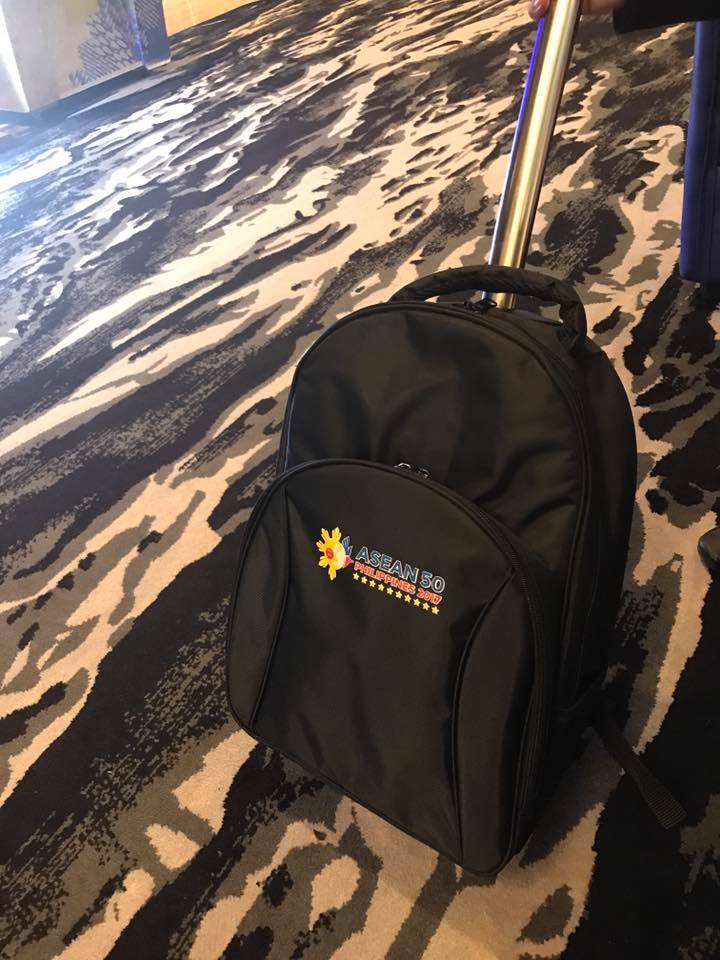 The controversial  issues left behind by the ASEAN summit  are disappointing but, I must say the Philippine hosting is a success. No major security threat while the delegates and leaders were in our country. The small successes of Asean  include the Philippines and Indonesia allowing a roll-on, roll-off (Roro) vessel route from Davao to General Santos then to Bitung, Indonesia, which cuts the trip from two to three weeks to one or two days. There is much room for improvement in the media access especially for bloggers . But let’s take a look at the last two paragraphs of the President’s opening speech  that look at the positives.

Let us remember: ASEAN has a compelling narrative of positive change [that] we can hold up to the world. Through our distinct ASEAN way, our region – with all its promise – stands at the center of the future of the Asia-Pacific region.

Let us with brave hearts and firm mind resolve to do all we can to make all our aspirations a reality. [This] will be the lasting legacy of ASEAN not just for our peoples but for the whole world.

Each one of us play a part in the vision of ASEAN.