For the newly bereaved, November 1 hits them with the reality that it’s their first All Saint’s Day with their precious loved one. It’s their first time to honor the dead with the rest of the country. No wonder, grief is once again featured in the magazines , TV and radio. Last Sunday, Cory Quirino invited The Compassionate Friends to her DZMM radio program with the topic of “Handling Grief and Loss” . The thought of discussing the basics of the grief process in Tagalog caused me to panic. Can you imagine me struggling with words like “pagdalumbhati”? (if I even spelled that right) . How does one say “positive resolution of grief?” The best testimonials would definitely come from the newly bereaved parents who actively worked on their grief with help of The Compassionate Friends. I asked if I could invite more parents to the interview. I dragged 3 newly bereaved parents and Alma Miclat, a co-founder of The Compassionate Friends. A psychiatrist, Dr. Josefina Sayo served as the resource person on the grief process and explained that there is so much stigma attached to grief.

Typhoon Paeng’s update interrrupted the show that the one hour and half show seemed like thirty minutes.

What totally amazed me were these 3 newly bereaved parents who were able to express their loss and testified how sharing their grief truly unburdened some of their pain. We know that pain can never be totally taken away but somehow sharing it to others ease the burden in our hearts. And so The Compassionate Friends continue to come monthly…to meet, to hug, to cry, to laugh to listen and to try to understand another’s story. We come to love each other’s children that we never got to meet. Their faces become almost as familiar as our own children’s countenance and so incredibly dear because they were so special to our friends. In sharing our children’s lives and their deaths, they continue to live on through our stories and our pictures and we are comforted as we grieve together.

Sharing grief is a crucial step in grief work. No wonder my dear friend, Cathy Babao-Guballa started Grief Share, a new grief ministry for all types of losses.

Michael Tan’s Opinion column on the “World’s Best Universities” which he based on the Times Higher Education Supplement-Quacquarelli Symonds (THES-QS) World University Rankings provided so many insights on the state of Philippine Education . I’m glad to see that the universities of my two girls made it to the top 500 , including two other universities. We can’t compare the Philippines to America, Australia or the UK. Harvard is the number 1 school followed by Cambridge. But take look at Indonesia, a country less developed than the Philippines. It had three universities, all state-run, beating us in rankings

Let’s look at how the Philippines did. The University of the Philippines (UP) came in 299th globally and 47th among Asian universities. I have to say that’s not too bad, considering how UP has had to plod along with shrinking budgets and with the flight of so many good professors. Trailing behind UP were three private universities: De La Salle (392nd), Ateneo de Manila (484th) and, talk about a photo finish, the University of Santo Tomas at 500th.

With slashed budget from our government, it’s surprising that the state university is still alive and kicking. When I brought M around the UP campus as an incoming freshman, I was appalled at Palma Hall’s old chairs, broken windows, and dirty walls. It was as if they had not done any cosmetic renovation since I graduated over 30 years ago. I was confident that UP had dedicated professors inspite of the decrepit state of some classrooms. In the beginning, M’s heart was really not into the state university. She wanted to join her eldest sister at Ateneo. I insisted that UP is the better school and for economic reasons, it was the better option than Ateneo. I convinced her that her maternal grandmother was one of the pioneer students of the UP Diliman Campus. It was my mother’s legacy to pass on the values and great education that UP had to offer. After much tears and several arguments, she relented. Today , M is full of gratitude that she chose UP.

While waiting for our purchase at the drugstore, my husband starts “playing” with his laptop’s Globe Visibility Mobile Internet feature. Hehe, how I wish I… Read More »Globe Visibility (HSDPA) mobile broadband on my Macbook

On the way home from Baguio, I caught the colorful array of Christmas lanterns on the roadside of Gerona, Tarlac.

“I want to take photos” I begged my husband to stop.

The long stretch of bright [tag]Christmas Lanterns[/tag] was captivating. I had no plans of buying [tag]Christmas decors[/tag] but my husband (the Grinch) thought it was rude to take photos and not buy anything from the poor vendors. Strictly speaking, my husband isn’t really a Christmas Grinch. Ever since my son died in 2000, the holidays are the most depressing season for him. Next to Halloween day, the most difficult holiday of the year is Christmas. Christmas decors just remind him that Christmas is lonely without our little boy. Of course, we grieve differently . Christmas is a happy occasion for me. I digress. Anyway…

“Okay, let’s shop”. M and I started our search for the traditional Christmas lantern, the parol . There were probably more than 20 vendors all selling the same design ranging from flowers, butterflies, snowmen, stars, trees even a papaya tree, capiz lanterns and more.

My husband ventured to the other side of the roadside stand. Much later, he surprised me with 10 colorful star lanterns strung together. I never expected him to actually shop for himself. Joy filled my heart. It shows that Christmas shopping wasn’t a difficult task anymore. Look at what we got…

It surprised me that there is a scientific explanation for those drivers that are just stark raving mad on the road. Scientists call it “Road… Read More »Anger Management

I’ve mentioned before of our plans to move back to the childhood home of my kids. It’s the house I sold to my paternal auntie… Read More »House Hunting Adventure: An Amityville Nightmare

I just received this email. October 20, 2006 Dear Representative, Congratulations! Your Web site, Touched by an Angel, is one of the Pre-Finalists in the… Read More »This blog is a pre-finalist in The 9th Philippine Web Awards

As a resident of Makati City, I am aware of corruption rumors on Jojo Binay’s 20 year reign for the longest time now. Binay always loses in mayoral elections from Makati’s exclusive villages but he gets most of his votes from the squatters of Makati City. Oh yes, they are there right now in front of the city hall cheering for their beloved Mayor. I am not surprised that Binay defies the suspension order from the Local Government. It’s funny that he asks to see the Bill of particulars regarding payment of ghost employees. He asks “what are the names of these ghost employees?”. Well aren’t they supposed to be ghost employees? Do they even have names?

What’s even funnier is holing up himself in his office. He can always let 60 days pass by if he is confident he is not guilty of the charges. The chances that he is “innocent” is very slim though. The Warrior Lawyer has more to say on this bunker mentality

This sideshow in the continuing farce that is Philippine politics was enlivened by the appearance yesterday of former President Cory Aquino, who dropped by to support an ““old friend”. After all, it was she who jump-started the Jojo dynasty by appointing him Makati Officer in Charge after the people-power revolt in 1986. The Warrior-Lawyer agrees with the observation of columnist Max Soliven, who said that Cory now sounds and talks like her daughter, Kris ““Deal or No-Deal” Aquino-Yap. Tsk, Tsk

Let’s hear the side of Cory Aquino naman:

““We should show that we are all for justice Ã¢â‚¬Â¦ Jojo, you can count on my support and prayers. We should all pray for justice,” said Mrs. Aquino, calling Binay by his nickname.

““We all see his goodness to his constituents, especially to the students, to those in need of health care Ã¢â‚¬Â¦ He showed that he could take care of his constituents. I think he is a role model for all mayors,” she said of Binay, who first became mayor when she was in MalacaÃƒÂ±ang.

I think….?? Cory is not even sure of Jojo Binay’s qualities. Haaay enough said. Can you imagine Jojo’s dynasty is even longer than the Marcos dynasty?

Speaking of the opposition and the current administration, I have the perfect Holiday/Christmas gift for them. This chess set…

A Great Teacher is Never Forgotten

Two days ago, my daughter asked…. do you remember Miss Syquia? Of course I remember her. How could I not forget the sweet and soft-spoken… Read More »A Great Teacher is Never Forgotten

If you are a couple very much in love, instead of calling them by their first name, you’ll call them a little term of endearment like “`honey’ or `honeybunch,’ or `sweetheart’ `sweetie,’ `sweetie pie’ – anything that has to do with sugary sweetness. Sugar sweetness alright – hey sugar, sugar lips. My ex-boyfriend in the seventies (now my husband) is romantic and mushy guy but what is his term of endearment to me? 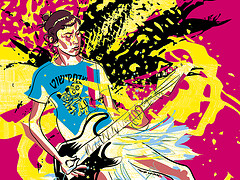 Nice! It was the late seventies and I had no idea what punk actually meant. I don’t think I looked or acted like a punk. I never bothered to find out about the punk culture or the reason behind my ex-boyfriend’s term of endearment. The word “punk” just meant an affectionate and loving word to me. What I knew back then was that Punk first emerged in the mid 1970s in London as an anarchic and aggressive movement. Closely aligned was a music movement that took the name punk. Punk as a term of endearment from my ex-boyfriend was unique. That’s all.

When I travelled with my sister to the UK in 1984, I witnessed my first punk fashion in a London zoo. A couple with a child were holding hands as they viewed the animals. The mother had long burgundy hair while the father had green spiked hair. Their 3 year old daughter was in between them, skipping happily as they walked. The cute little girl had orange hair which was obviously dyed. I couldn’t help staring at them. So this was the punk look, I thought. It was fascinating and different.

Many years have passed since then and now I have 2 daughters . Many fashion magazines advertise the classic punk hair-style or suits with as a punk-style touch as the “respectable image.” The punk now became an established mainstream style which is not what the original punk scene of the 70s had in mind. L wore pop punk fashion (clothes) in high school which continued on till her junior year. That didn’t last long. She moved on to girly fashion then the college preppy look. So I thought that was the end of the punk phase.

A few days ago, L sent me a text message:

“Mommy can I get red streaks in my bangs? 400 pesos only”

Hm, I thought it would be cool since another daughter M just had light highlights done at Salon de Manila. It looked terrific on M.

“Sure go ahead and take a photo of yourself”

Talking to her via google talk a few hours later, I asked for the photo.

Then I gasped…
Read More »I’m a Punk