My Canon PowerShot A710 IS 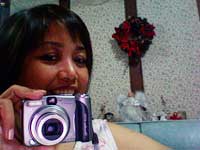 At the height of her blogging days, she had quite a collection of digital gadgets to enhance her blog entries. Unfortunately L seems to have a jinx with digital toys. I love L very much. Sadly, L just hasn’t been lucky with anything containing “electronic chips” for the past two years. Let me count the ways:

1. For her 18th birthday, I bought her this nice camera phone. Two months after, the phone drowned as she slipped into the shallow waters of Tali Beach. She wanted to capture the breathtaking sunset. The dumbest thing one can ever do when a cellphone gets wet is to turn it on. Naturally, the battery will cause a short circuit, I told L. “Just remember to remove the battery when this happens and dry the phone”

2. Her Sony Cybershot digi cam together with her Panasonic Digital Camcorder w/ Still Mode/MP3/Voice Recording were stolen as she played a video game in the Power Plant Mall. She had placed the bag on the floor and was too preoccupied blasting away the enemies in the video screen . Little did she know that her bag was already snatched just a few feet away from her.

3. A sympathetic reader donated a part of the cost of a new digital camera, a Canon Ixus 430 in 2004. L used her savings and I pitched in the rest to buy this new camera costing 35,000 pesos in 2004. It was expensive because a 4 megapixel camera was a new thing back then. Barely a year after, she vacationed in San Francisco. As she toured one of San Francisco’s aquariums, she slipped and the contents of her handbag fell into a pond. Her handbag’s zipper was not zipped and the camera fell off head first . What did she do? She picked her camera and turned it on. ugh, read number 1 above. Don’t turn on a wet electronic gadget.

There are a lot more. I cannot even fathom how her CPU’s motherboard ended up in smoke.

Read More »My Canon PowerShot A710 IS

While waiting for our purchase at the drugstore, my husband starts “playing” with his laptop’s Globe Visibility Mobile Internet feature. Hehe, how I wish I… Read More »Globe Visibility (HSDPA) mobile broadband on my Macbook

On the way home from Baguio, I caught the colorful array of Christmas lanterns on the roadside of Gerona, Tarlac.

“I want to take photos” I begged my husband to stop.

The long stretch of bright [tag]Christmas Lanterns[/tag] was captivating. I had no plans of buying [tag]Christmas decors[/tag] but my husband (the Grinch) thought it was rude to take photos and not buy anything from the poor vendors. Strictly speaking, my husband isn’t really a Christmas Grinch. Ever since my son died in 2000, the holidays are the most depressing season for him. Next to Halloween day, the most difficult holiday of the year is Christmas. Christmas decors just remind him that Christmas is lonely without our little boy. Of course, we grieve differently . Christmas is a happy occasion for me. I digress. Anyway…

“Okay, let’s shop”. M and I started our search for the traditional Christmas lantern, the parol . There were probably more than 20 vendors all selling the same design ranging from flowers, butterflies, snowmen, stars, trees even a papaya tree, capiz lanterns and more.

My husband ventured to the other side of the roadside stand. Much later, he surprised me with 10 colorful star lanterns strung together. I never expected him to actually shop for himself. Joy filled my heart. It shows that Christmas shopping wasn’t a difficult task anymore. Look at what we got…

I’ve mentioned before of our plans to move back to the childhood home of my kids. It’s the house I sold to my paternal auntie… Read More »House Hunting Adventure: An Amityville Nightmare

The Mystery of the Missing Radiator Cap

“uh , where’s the radiator cap?” my husband’s irritated eyes glared at me. I followed him to the car. “Look you have been driving the… Read More »The Mystery of the Missing Radiator Cap

My family is moving to our new home in the Pasig-Markina sometime next year. It’s an exciting move and something to look forward to. One of the things that I will miss in Makati are the array of Cable Broadband Internet providers and free wi-fi hotspots. I just realized how fortunate Makati residents are when it comes to broadband providers. I have been spoiled by Destiny Cable my primary broadband provider since 1999 which provides us with no speed limit at a reasonable rate of 1688 pesos a month. And this includes TV cable as well. In fact the speed falls to 386 kbps, the support service is sent to the house. Now, I also have Smart Bro which is incredibly slow. If you are spoled with 2MBPs internet speed by Destiny Cable, you will scoff at Smart Bro’s dismal less than 200 kbps speed. It’s supposed to be 386 kbps. Speed and reliability are important to me because I am a netrepreneur and derive income from my e-commerce sites.

When I started to ask around the area of our future home, disappointment overcame me when I found out that my trusty cable provider did not have any service there. I need 2 cable broadband internet providers for redundancy measures. What choices did that leave me?

A Unique Shop in Makati: “I love You Store” My daughter who is turning nineteen on Tuesday already made plans for a birthday gift. A funky new look from this cool and unique underground basement shop, the “I Love You Store”, new wardrobe, a hair dye and new contact lenses. Friday night is horror night in the streets of Makati Avenue. “I Love You Store” is located in 7849 Underground Pilar Place, Makati Avenue and the hairdresser is only available at night. We travelled all the way from UP Diliman for one hour and a half only to be informed by the charming owner that Maribel, the hair stylist would arrive from a styling gig at 9:30 PM. It was 7:30 PM. Knowing that it would take me another hour to drive to our house in Makati because of the horrendous traffic, I opted to wait . Fortunately, the shop had internet wi-fi and while my daughter shopped for clothes, I worked on my online business.

In the one hour and a half wait, I found out so many interesting facts about this shop :

1. The owners are Fine Arts Graduates. No wonder the place reeks of creativity.
2. Each piece of clothing is one of kind. That’s why each item of clothing is a labor of love. Hence the label “I love you Store”
3. The haircut is not really their main source of business. The professional fee of the hair stylist is by donation-basis. Pay what you can afford.
4. The owners are obviously having fun while doing their business. You can see it in the glow of their faces.
5. Every piece of item, the walls and every nook in that store is an art piece. check out the “I Love You Store photos I took of almost every corner of the shop.

Read More »A Unique Shop in Makati: “I love You Store”

Online shopping is quite tempting especially if one finds bargains. My sister in San Francisco tells me that she doesn’t go to the mall anymore… Read More »My Ebay Seller/Buyer Phobia

My 41 year old baby brother in Missouri (I still call him baby brother because I took care of him) wants me to be his wedding coordinator for a church [tag]wedding[/tag] in the Philippines. My brother and his wife did not have a church wedding 14 years ago due to financial challenges. Now that he is a successful neurologist, he dreams of a marriage with God’s blessing. He has indeed been blessed through the years with 4 lovely children, a lucrative medical parctice and a devoted wife. I told him that weddings in the Philippines is not the same as it used to be. I started to look around for wedding fairs. The last time I attended a wedding bazaar was in 2004 for Lauren’s debut plans. Just looking at the prices for photography, venue, catering , cake and other perks for Lauren’s debut could easily cost 150,000 pesos ($2,500.00) at the least. My daughter dubbed it “A not so typical debut celebration” and happily, the total expenses were only 80,000 pesos ($1,500) for 100 guests. Divisoria is my friend. My brother was impressed that I coordinated a “sort-of-grandiose” celebration . But weddings are different! There are a 101 considerations. I told him that I would shop around for a wedding events coordinator who will coordinate with me.