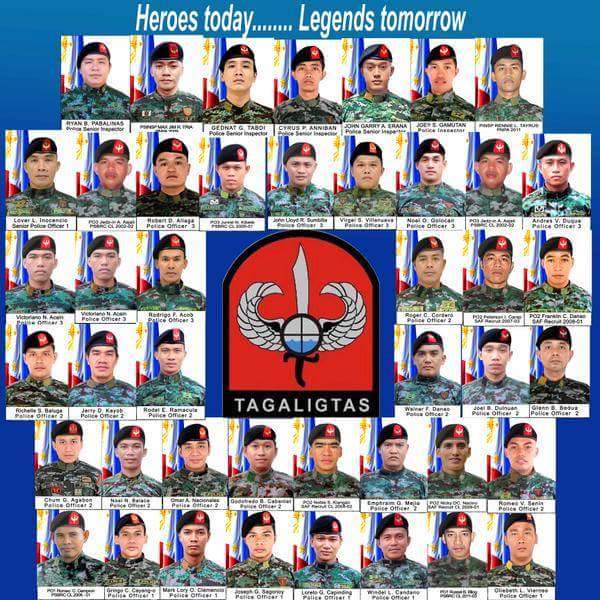 They chose to become policemen.
They strived to be the best they can be.
They didn’t really want to be heroes.
They just wanted to do the job they loved to do.
And that job is to defend the country and their countrymen.

They lived by their core values of Service, Integrity and Excellence and their motto is “By skill and virtue, we triumph.”

But life can really be cruel sometimes. Despite the intensive training they got for being an elite group known as “The Philippine National Police Special Action Force” or “PNP-SAF,” it is unfortunate that the bullets that killed them knew no training to recognize them. Instead, the ones who pulled the trigger on them were the ones highly trained to recognize them as the enemy.

And so they fell.

Image from @MisterBanatero. Some rights reserved

Forty four brave young men fell doing their duty to their motherland. They fell on an unfortunate day, a Sunday. They fell on a day when people were mostly worshipping and praying for peace. They even fell on the birth anniversary of the late President Corazon C. Aquino on January 25. Incidentally, on January 29, 1991, or 24 years ago, she signed Republic Act 6975 and with it, the PC-SAF became the PNP-SAF. The objective of the said Act was the need to reshuffle and revamp every government agency to facilitate the transition of the government from Dictatorship to Democracy.

Those who have seen the photographs of the Fallen 44 on television cannot help but feel a tinge of sadness as if they know them personally. There is an invisible thread that somehow linked the country to them and their loved ones, a link that understood the grief, never mind the reason for their deaths. I watched and felt sad. As a mother, I couldn’t imagine what their own grieving mothers are feeling right now. I could only reach out in prayer that their souls journey and rest in blissful peace after their bodies have been brutally massacred.

President Benigno Simeon Aquino III, son of the late President Cory, declared January 30, 2015 a “Day of Mourning” for these brave and fearless officers of the Special Action Force.

As in the days of Typhoon Yolanda, or the early days of the Pork Barrel and DAP controversies, or even the recent papal visit, nothing divides our country more than opinions relating to the words and actions of the President. I know he cannot please everyone: there will always be dissenters, bashers and critics and there will also be the perennially jaundiced followers and apologists but amidst all these, surely, there’s the right thing to be done at the right time and the right place. It’s not giving in to popular demand or riding the tide of a politically correct decision. It is simply being human and humane devoid of political trappings.

Prior to the “Day of Mourning” were days of waiting and expecting, and eventually, bashing and defending not just in social media but in mainstream media as well. #NasaanAngPangulo trended worldwide more than “TruthfortheFallen44” or “SAF44.” Former Presidents and former Generals joined in the fray as the President, his concerned cabinet members and the officers involved in the cover operation were catapulted into the limelight of notoriety once more. Suddenly, everyone had an opinion. Suddenly, everyone wanted to be heard. Suddenly, the war turned to a word war that burned in cyberspace.

That wouldn’t have been the case had the President did what he should have done as Commander-in-Chief of the Armed Forces of the Philippines and as a human being. The Head of the Roman Catholic Church, the charismatic Pope Francis just barely stepped out of our country leaving a trail of hope and faith amidst chaos and despair when everyone was suddenly jolted back to reality. The least that the Filipinos wanted to hear from the President during his televised address of the nation last January 28 was an honest-to-goodness admission of accountability instead of a “tour’ of his mind with its intricate and oftentimes misplaced logic that perfectly screamed “evasion!” What’s wrong with saying “I am responsible” the way sacked PNP Chief Supt. Getulio Napeñas stated? What’s wrong with saying “I am sorry” for the botched covert operations? Does he need the blood of 44 more men to write that down?

Then came the day when the 44 bodies in metal caskets arrived at Villamor Air Base where the #Fallen 44 was given the appropriate honors. After the much-criticized speech, the President could have redeemed himself by being present at the ceremonies. Voila! He wasn’t! Instead, he chose to grace the previously scheduled inauguration of the Mitsubishi plant in Sta. Rosa, Laguna. It’s in times like this when I think having a wife would’ve been beneficial to him because a woman’s wisdom sometimes can save a man’s ass. And I wonder, who in the world advised him to put a car above a soldier’s dignity, and never mind going to the arrival of the bodies because he will lead the necrological services anyway?

And people continue to ask, where is his mercy and compassion? If the Pope himself expressed his desire to be with the Yolanda victims as soon as he heard about the disaster in Leyte, and if he insisted on flying to Tacloban amidst a Signal No. 2 typhoon, why couldn’t the President personally condole with the bereaved loved ones and be at the arrival of the slain SAF officers? Why, oh, why?

Being there for someone in times of loss is more than enough comfort. It means a lot to have someone like the President of the country to be there to show he truly cares, that he has a heart for those fallen soldiers who he called heroes. Never mind if he doesn’t admit that he gave the marching orders and sent those men to their graves. There is no need for words, a strong presence is more than enough to show his big heart, if he really has one.

People of the Philippines: “Sir, where were you when your presence was needed most?”

President: “I don’t think I was ever asked that question. At the same token, parang it’s a rhetorical question, ‘di ba?”

People of the Philippines: Was that to much to ask, Mr. President?