The last time we had a pure bred dog was over seven years ago. The children grew up with frisky dalmatians. My two girls screamed with joy when their Uncle Raul gave them Sindy, the female dal who in turn gave birth to adorable puppies. This was at the height of Disney’s 101 Dalmatians in the early nineties. Can you imagine their delight when 6 puppies scampered about our living room? My maternal instinct yearned for another baby as I helped them take care of the dalmatians. Little did I know that Luijoe was already growing in my womb. Many years later, when we moved to Makati, the village security guards kept giving us a fine of 1,000 pesos ($20) everytime one of the dalmatians broke out of the gate and caused a nuisance to the neighbors. Exasperated, we brought them over to Baguio where they would be free to romp around to their heart’s delight.

Moving to our new home has its risks. Security in the village is not as tight as it is in here. Outsiders are just free to enter in and out of the gate. So my husband thought it’d be best to get a dog for added security measures. I remember how the utility people freaked out whenever our dals came barking at them by the gate. But we didn’t want dalamatians anymore. We didn’t want a guard [tag]dog breed[/tag] like the Doberman because they could be mean. We just wanted a dog that could be a family pet, yet intimidating to strangers and hopefully an intelligent watchdog. Another criteria involved the two precocious kitties who are part of the family. How we love our cats! We don’t want our dog to harm them . They don’t have to be buddies but the cats and the dog need to be civil towards each other.

M took upon the task of researching for the right dog breed for the family. Her first choice was the Siberian Husky

We found out the Siberain Husky is not quite friendly to small animals. Instinctively they ran after them. The next choice was the Akita

Then again, M discovered that Akita’s were like the Huskies who ran after small animals. No, that won’t do. M thought that herding dogs or non-sporting dogs would be the better breed. She suggested the Collie but I thought long haired dogs might be difficult to take care in our tropical weather.

I asked “what about the Belgian Malinois?

The Belgian Malinois , a herding dog closely resembles “the German Shepherd Dog, but upon closer inspection, many differences may be seen including size, bone structure, color, and head and ear shape.” He looks intimidating yet probably kind to cats since the breed is a herding dog. Everyone agreed and the search for the Belgian Malinois began…

Then M showed me an adorable photo of this cat cuddled up with a dog…. 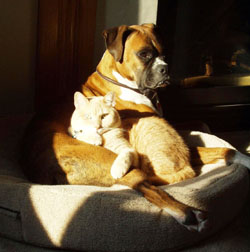 A [tag]Boxer[/tag]! The photo just melted our heart.

The family happily agreed. A boxer, a working dog it is. I found a boxer breeder in Cainta with pups sired by the Philippine Champion Solo (Boxer) , ready to be weaned by the end of February. A male boxer pup is 10 thousand pesos ($204) while the female is 12,000 pesos ($245) but we could still get a discount if we reserved early. Everyone chose this cute boxer pup.

When we selected this fawn colored Boxer pup, the breeder approved of our choice as this pup was the largest of the litter and had the best color as well. He agreed that the Boxer was nice to kitties as he also has some cats in his household.

I still wanted to see how a boxer reacted to people and small animals. By coincidence, a dog show at Tiendesitas (read Lauren’s entry) last sunday had an array of breeds. There were lots of Huskies , Boxers and even an Akita. I saw for myself how the Husky ran after a small chihuaha. The Boxers in the show were regal and smart . I liked the Boxer. Though the Boxer is not as pretty as the Husky or Akita or the Samoyed, it seems like the perfect member for our family, the [tag]right dog breed for the family[/tag]. I talked to the dog trainer/show handler of the Boxer and we’re hiring him for Obedience Training and to train the Boxer to be nice to the two kitties.

The name of our Boxer pup was the next agenda…Over at Google Talk, my husband suggested M some names….

Since the dog is a BOXER breed, why not Pacquiao?

A NONONOOOOOOOOOOOOOOO typed out in front of my chat window. (read chat). Enough said.