Visit notoconass.com for the manifesto
In the baby book of my daughter, Lauren, there is a blank space written there for current events on the day of her birth. You know how moms are. We want to document everything and reminisce on those good old days. I clearly remember scribbling down …Today, March 25, 1986, THE 1986 PROVISIONAL “FREEDOM” CONSTITUTION was proclaimed. What joy it was to whisper to my first-born that she is going to live in a democratic society. I stroked her chubby little fingers and told her that “A new government was installed through a direct exercise of the power of the Filipino people assisted by units of the New Armed Forces of the Philippines and the heroic action of the people was done in defiance of the provisions of the 1973 Constitution.” Oh yes, our country held so much hope for her future.

The following year on February 11, 1987, the 1987 Constituion of the Philippines was proclaimed and took effect, just six months before I gave birth to my second daughter, M. So full of hope and love of country, I threw the US immigration papers aside that my sister sent over to me, as I read the Preamble:

We, the sovereign Filipino people, imploring the aid of Almighty God, in order to build a just and humane society and establish a Government that shall embody our ideals and aspirations, promote the common good, conserve and develop our patrimony and secure to ourselves and our posterity the blessings of independence and democracy under the rule of law and a regime of truth, justice, freedom, love, equality, and peace, do ordain and promulgate this Constitution.

And what happened just a few hours ago? It took only a few seconds for the House of Representatives to approve a resolution that would convene Congress into a constituent assembly to amend the 1987 Constitution. (click here to read Proposed Charter Amendments).

Perhaps, our country needs some change, whether it be a charter change or not. But at this time?

I strongly oppose this resolution to convene a Constituent Assembly that may practically extend their terms such as our dear President and her allies in power. Why couldn’t they amend the Constitution after the term of President Gloria Macapagal Arroyo? It sounds really suspicious.

The resolution gives us some measure of comfort.

The resolution states that its more than 170 co-authors are “resolved with finality” that the terms of the following will not be extended Ã¢â‚¬â€œ the incumbent president and vice president, senators, representatives, governors, mayors, and other elected officials whose term of office will expire in 2010.

It also provides that the 12 senators who were elected in 2007 for a six-year term will be allowed to finish their terms, and that the 2010 elections should push through as scheduled.

I just don’t believe them.

The 2010 presidential elections is 11 months from now. Congress will not resume session until late July after President Gloria Macapagal Arroyo’s State of the Nation Address. I don’t see how they find the time to rewrite the Constitution with barely a year to go before the May 2010 elections.

I want to look back and think that the democracy I fought (together with our fellow countrymen) for my children was not in vain. I’d like to believe that the 1987 Constitution that established the Philippines continues to be a “democratic and republican State”, where “sovereignty resides in the people and all government authority emanates from them”

I don’t see any reason for this Constituent Assembly. I am sad and angry at their actions. How dare them? Sovereignty lies in us, the people. Shame on you, congressmen. Do you really know if the charter change is what we want at the present time? Do you represent the voice of your respective constituents?

Do I need to repeat it?

Our Congressmen signed a resolution to convene a Constituent Assembly that will practically extend their terms: OPPOSE ANY CHARTER CHANGE PERPETUATING GMA AND HER ALLIES IN POWER!

Publish at Scribd or explore others: Other How-to-Guides & Manu Law & Government Government-Asia

To protest against the passage of this patently unconstitutional law and the delay of the promulgation of more important bills, students from all over Metro Manila will congregate tomorrow at 1:00pm in front of the St. Peter’s Church along Commonwealth Ave.

UP students can converge earlier at AS (Palma Hall) Lobby at around 10 AM, then proceed together to the protest venues

3. visit Notoconass.com and if you agree, sign on and spread the word.

4. If you feel you’ve been conned. Join June 7/4pm/Baywalk 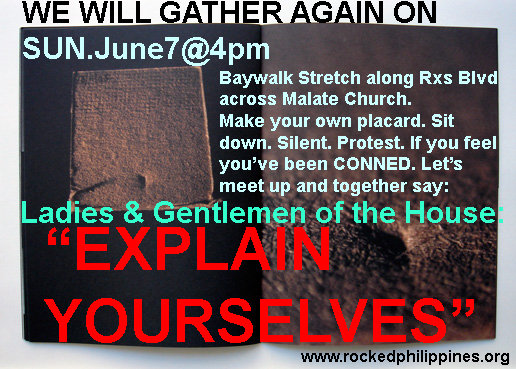 5. If you believe in preserving our Constitution, put these badges up in your blog: (Thanks Andrew)

6. Read more on the Charter Change and decide your position. Be updated.

Also, read through other blogs and see below if your congressman approved the House Resolution No. 1109 , then ask them their reason for their approval.

No to Conass Badges by Andrew de la Serna

Have You No Shame? An Open Letter to the House of Representatives by Marck

In the Grip of Electoralism by Caffeine Sparks

Lighting the Beacons for a Phoney War? by Manolo Quezon

Get a Grip by Benign0 (contrary opinion but sincere)

There’s a Reason we Call it Con-ass by Bikoy

House Resolution No. 1109 and the People by Juned

The Lone Ranger Chacha of The House by Congressman Ruffy Biazon.

Approval of HR 1109Ã¢â‚¬â€œlike a thief in the night, they again robbed the Filipinos of their democratic rights by Dine Racoma

Good Morning Manila, The Asses have it by Cocoy

HR 1109 in the Plenary, Live Blog by Caffeine Sparks

Read the list of congressmen here who signed House Resolution No. 1109. (Those who voted “Aye” may not have signed this HR 1109.)

“I am ashamed of my Congressman (enter name if applicable, district) for supporting HR1109.”

Here is another list of the members of the House of Representatives whose names are on House Resolution 1109, broken down by regions.