61
SHARES
FacebookTwitterSubscribe
““I would rather die a meaningful death than to live a meaningless life.” Corazon Aquino “Our mother peacefully passed away at 3:18 am of cardio-respiratory arrest” – Senator Benigno Aquino Jr.

According to two political analysts interviewed by abs-cbnNEWS.com /Newsbreak, Mrs. Aquino will be missed for what she symbolized.

““She’s most powerful as an icon. Like Cardinal Sin. No one else can play that role. No one,” said Alex Magno, a political science professor of the University of the Philippines.

I feel sad over her death and at the same time relieved that she didn’t have to suffer for long. My husband wrote a few weeks ago that we should “Let Cory Aquino die in Peace“. After having given so much of herself to God, country and the cause of democracy, why not give her this one last wish and let her die with dignity and grace ?

Her legacy as president is very precious to me. At the height of people power, I was 8 months pregnant with my first child, Lauren. It was a precarious situation with the massive cheating over the snap election.

At the height of the snap election confusion, I felt so insecure that my baby’s future would be at stake. God forbid, a civil war. My husband already planned that we would move to the mountains just in case trouble would occur. The idea just brought me to tears. How will I give birth in the mountains? But surprise, surprise, People Power just happened. Much as I wanted to be in EDSA, I was in no condition to join my countrymen. My huge belly would be squashed with the millions of people.

How hopeful I was that our country would prosper under a democratic government. When I heard the inauguration of Cory Aquino over the radio, my heart leaped with joy and so did Lauren inside my womb. I thought my baby was excited at the thought of a new government.

Sure, many critics would say Cory was a weak president but she was our transition president towards democracy. The silver lining is that Lauren never got to experience the dictator’s strong man rule. At least the rebirth of our democracy was the legacy left behind by Former President Cory Aquino and People Power. The transition from the brutal Marcos dictatorship wouldn’t have been possible without a Cory who ensured a peaceful handover of power at the end of her term and who didn’t ambition to lift term limits. Which is a lot more than can be said of Gloria Arroyo. As she once said “I don’t have any formula for ousting a dictator or building democracy. All I can suggest is to forget about yourself and just think of your people. It’s always the people who make things happen.”

Her death saddens us all but does not diminish our continuing struggle to protect democracy from the evil plots of those in power.

Thank you for everything, Former President Cory Aquino. 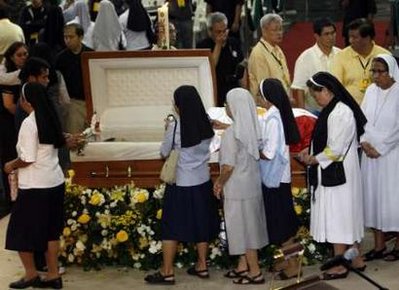