Looking beyond the ruins, a tour of post-quake Bohol #VisitBohol2014 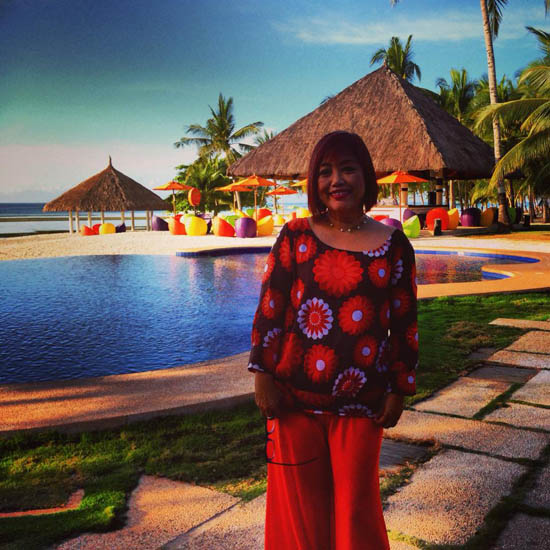 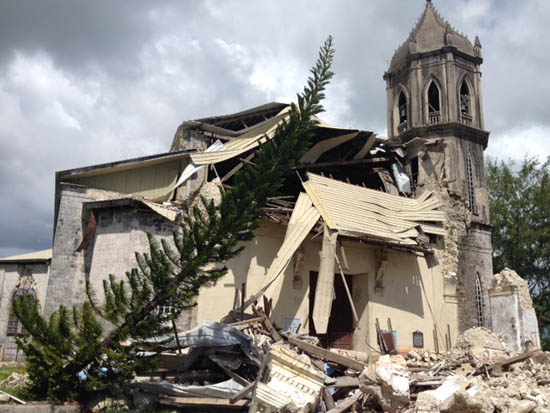 How does a province rise from the ruins of natural disasters? History has shown that it is possible for natural disasters to be engines of development and economic growth. The devastating 7.2 earthquake on October 15 followed by the November 8 super typhoon Yolanda brought so much collateral damage to Bohol’s thriving tourism industry. All I saw on TV, newspapers and social networks were the rubbles of heritage churches and damaged bridges like the Moalang bridge in Loon and Abatan bridge in Maribojoc. The sight of the chocolate hill that partially collapsed saddened me. It is hard to shake off the images of churches reduced to stones. In fact, I got the impression that Bohol is no longer a safe destination and there is nothing left to see for tourists. 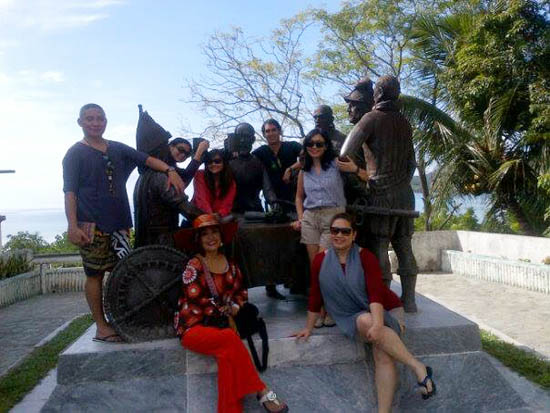 I was in for a surprise when USAID-Compete in cooperation with the the Provincial Tourism Council (PTC), the Province of Bohol and Department of Tourism invited a small group of travel writers and bloggers for a post-earthquake tour. PTC President lawyer Doy Nunag shared how the twin disasters affected local businesses and what the stakeholders are doing to turnaround the tourism industry . He proudly says, “it is business as usual” in Bohol. I thought it would take many more months for the tourism industry to start picking up. I wanted to see Bohol for myself so I could relay the good news to the rest of you. While there are still some traces of the earthquake damages in the city, the serious damages were located in the Northern side of Bohol. Let me give you a tour of places to revisit or explore in in Bohol.

1. Relaxing at the beautiful white beaches

The beaches are still there, of course! I got to stay at the South Palms , the newest resort in Panglao island which opened only on December 1, just one and a half-months after the 7.2 magnitude earthquake struck Bohol. The beach resort is beautiful and such a serene place to relax and let go of stress. 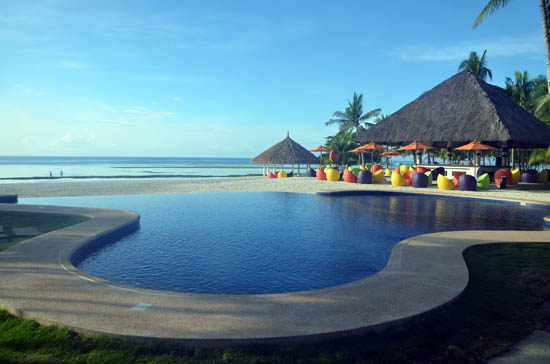 With 750 meters of fine, natural white sand , this resort has the widest beachfront on Panglao Island. 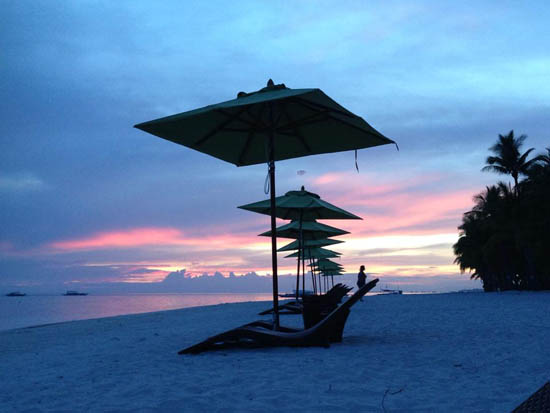 This part of Panglao Island is probably the only place where you can watch the sunrise (on the left side) and the spectacular sunset to the right of the beach. 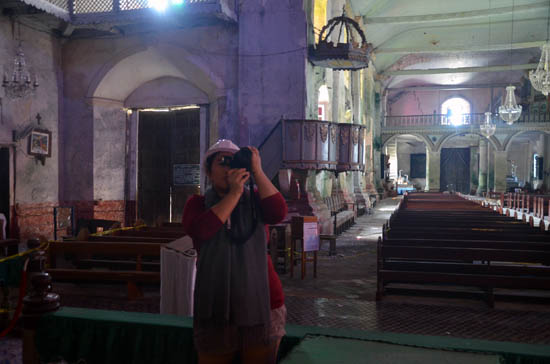 Out of Bohol’s 47 Spanish colonial churches, four were damaged and two were totally destroyed. The Baclayon church may be in ruins but it has not stopped from being a major tourist destination. I was able to go inside the church wearing a hard hat. Inside, you will find the gigantic church still intact although there is a large crack by the choir part. 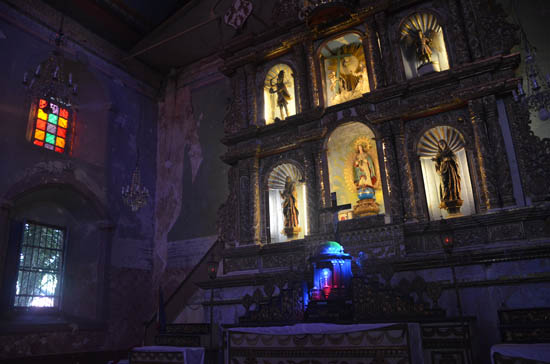 Fortunately , the altar is still intact including stained glass windows. An alternative to the popular Baclayon or Loboc churches is the Romanesque-designed Alburquerque church. The Parish Church of Sta. Monica was built in the midst to late 1800s and has one of the most beautiful painted ceilings. 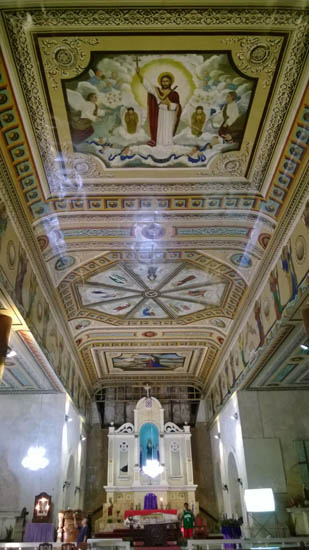 3. Spot the Tarsiers (Tarsius syrichta) in their natural habitat. 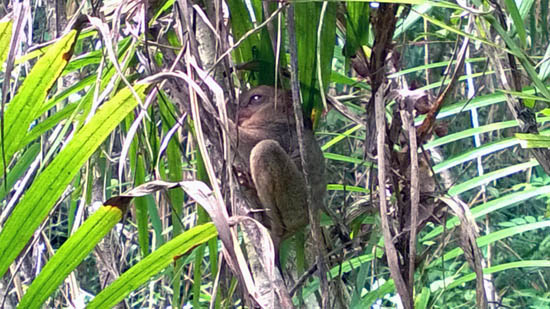 Deep in the forest foothill of Corella town lies the Philippine Tarsier and Wildlife Sanctuary of Canapnapan, Corella Bohol. Interestingly, there are three foreign volunteers here – one Italian and two Spanish – who trained in tour guiding and environmental protection. They have an enclosed forest area for visitors where you can spot endangered Philippine tarsiers. 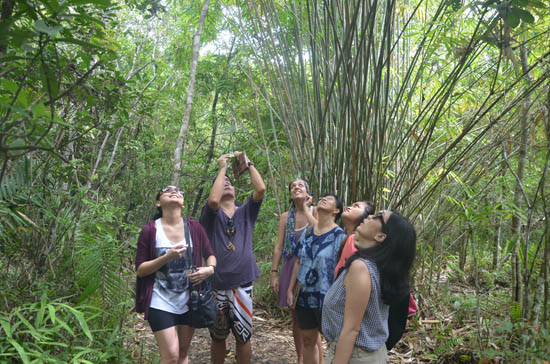 No one is allowed to hold the Tarsiers as they are easily stressed out . When the Tarsiers are stressed , they commit suicide by banging their head (which has a thin skull) to the branches. The primary mission of this sanctuary is to save the Philippine Tarsier, its habitat and other wildlife. There are only 100 Tarsiers in this sanctuary. Loboc river cruise operators were among the first businesses which reopened only a few days after the earthquake. Despite “business as usual,” Loboc operators admitted they were hardly hit by the twin disasters. Before the earthquake, a good day would bring in over 2,500 guests and on a bad day, about 500. After Yolanda, a good day would not even bring in 500 guests. 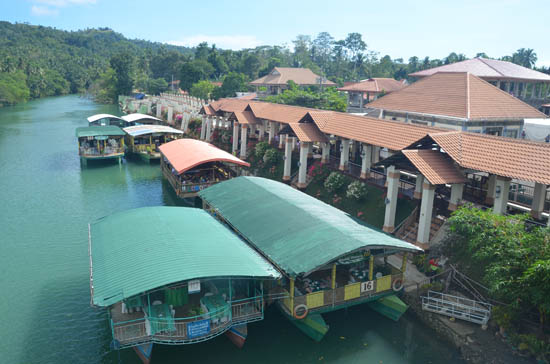 Massive damage is evident to half of the docking area but the rest are pretty much functional. There is so much to see along the scenic and winding Loboc River as I ate my buffet lunch. One can catch floating stopover stations along the way where locals perform cultural music and dances.

Loboc River is beautiful and serene! I keep repeating the word “beautiful” because there are just no other word to describe the place. 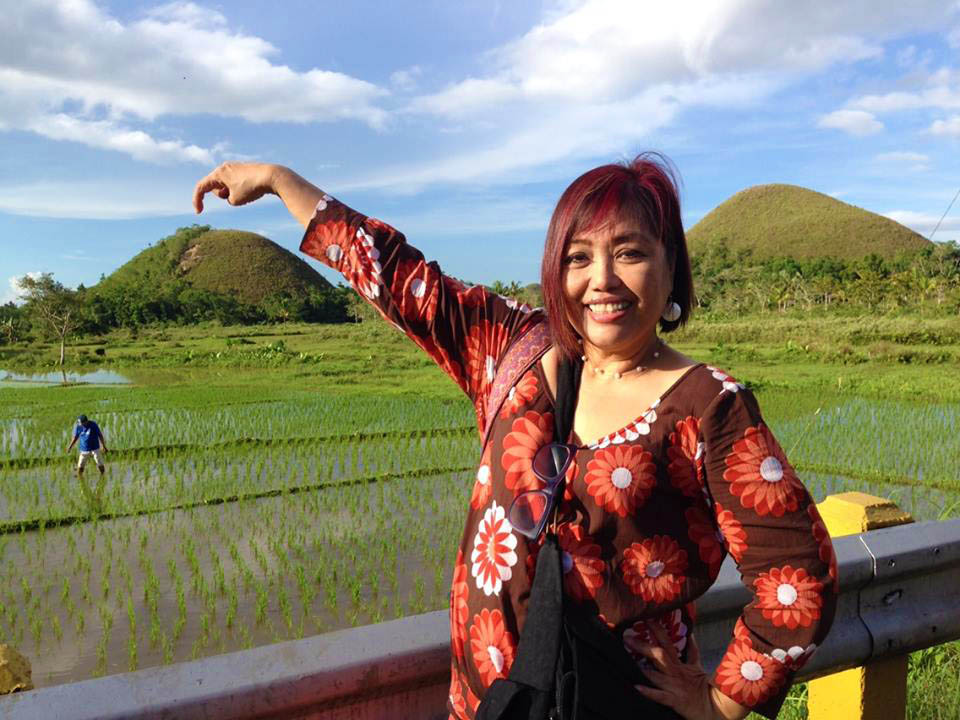 The crown jewel of Bohol, Chocolate Hills remain intact except for one hill which cracked during the earthquake. The image of a cracked Chocolate Hill seemed tragic but this is just one hill out of 1,776 Chocolate Hills. A lot of people ask “what’s inside the Chocolate Hills?” Bohol Governor Edgar Chatto says that it is now an attraction because inside contains “limestone na parang nag-melt na white chocolate”. These fossilized seashells below were discovered inside a Chocolate Hill. It is possible Bohol was once a seabed. Too bad , it was raining so hard so I was not able to climb those 228 steps to get a panoramic view of the hills. I settled for the ground level view of these hills in Carmen. While these are the usual tourist spots in Bohol, there is something new that awaits you. There is the “geoscience tour” for travelers “who want to see the changes in the landscape, such as Maribojoc’s Punta Cruz where hectares of dry land rose from the shoreline, and what’s been dubbed the “Great Wall of Bohol” in the northern town of Inabanga, where a reverse fault rose from the earth after the quake.”