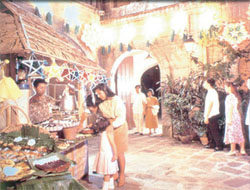 Three thirty in the morning
Wake up, he said.
Let’s go.

Bells tolling
In the distance
Calling us.

Walking briskly
in the dark
With my chattering sisters
And brothers
Shivering
I pulled my coat close to me
Against the chilly air.

Four a.m.
Struggling to keep my eyes open
In a church
smelling of candles
packed with people
Praying fervently
in Cebuano

This is torture, I thought
Let this be over soon.
Sacrifice, my father whispered
Preparing for Jesus’s birth.

Smiles from my neighbors inside
Sipping steaming cups of tsokolate
Munching sweet bread
Amid red and green parols
swaying by the windows.

I sighed.
Soon
It will be Christmas.

The poem was written by my younger sister five years ago. Now living in the US, she came up with the poem for her community paper after we reminisced on our childhood Christmas memories. Those were the days when we dreaded waking up at 3:30 AM yet we feared our dad’s anger if we didn’t obey him.

My sister asked “what was the word we used for simbang gabi?”

I know it as misa de gallo.

Oh yes, my sister recalled now. Misa de Gallo (Rooster’s Mass) is a more fitting word than simbang gabi (Night Mass) because we can literally hear roosters during the mass. I couldn’t understand why dad had to wake us up at such an ungodly hour. Going to mass this early for nine consecutive days is meant to show the churchgoer’s devotion to his faith and heighten anticipation for the Nativity of the Lord. In traditional Filipino belief, however, completing the novena is also supposed to mean that God would grant the devotee’s special wish or favor. I don’t think my dad was after granting of his wishes. He was a successful business man and a loving husband and father to seven children. He just wanted to follow Filipino tradition.

Despite the discomfort of waking up early, my sisters and I look back to these memories with nostalgia. Misa de Gallo was a test of our willpower to get up early and stay awake during mass. Of course, we were all wide awake for the free breakfast that our community prepared during the nine days. Many years later, I struggled to wake up at 4:00 AM and I succeeded only once since my teen years. That’s only because my two girls sang at the church choir. Maybe it was the Misa de Gallo memories with my family or my dad, but today I finally woke up to the sound of Christmas carols pealing in the air. No church bells ringing , just the soothing Christmas carols which actually woke me up. Unfortunately, Butch begged off and the two girls refused to wake up. So I walked across the street just ten minutes before the mass started and what do I see?! A jumpacked church. I should have brought a stool. For once, I liked the sermon of our parish priest as it speaks of the divinity of Jesus Christ, that Jesus Christ is the main reason for the celebration of the season!

Just like tradition, I dropped by to buy suman and puto bumbong to feed the sleepyheads at home.

Here I am unable to sleep so I am blogging about the Misa de Gallo in my parish church.