Hi everyone! This is Lauren ghost writi- I mean, guest blogging for my mom today. I wasn’t actually planning on attending the UP Lantern Parade yesterday but since I had activist things to attend to at Vinzon’s Hall, I figured I’d stick around and take a couple of photos. Plus, I’ve never been able to catch the lantern parade; I tried to when I was in college, but my classes would end too late and I’d get there only to reach the tail end of the parade. This year, as you all know, is UP’s Centennial anniversary and the 2008 lantern parade is supposed to be a bigger spectacle than the previous ones. I’m not sure what time it ended, but the parade was still far from over when I left at around 7.

My first mistake was bringing a point and shoot camera instead of my mom’s DSLR. Despite the crowd, I was able to take fairly decent pictures of the first few lanterns but my photos started getting progressively crappier as the sky got darker. 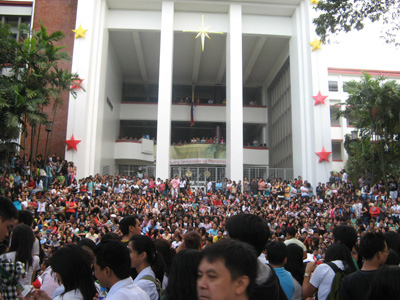 Palma Hall was too crowded for me to get a decent view of anything, so I walked over to the front of the Faculty Center where I could still worm my way up to the front. 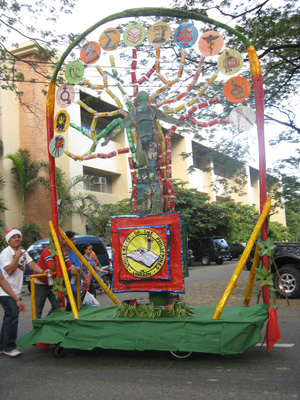 The UP Library’s lantern was one of the first few lanterns of the parade. While taking a cigarette break in between cramming my research during the last few schooldays of the year, I’d watch the staff working on the lantern by the library steps. The College of Economics 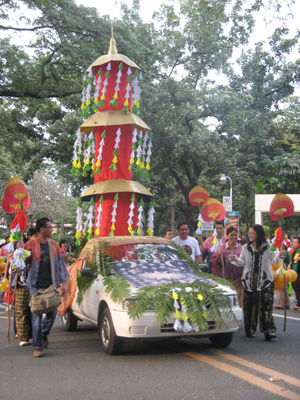 The Center for Asian Studies 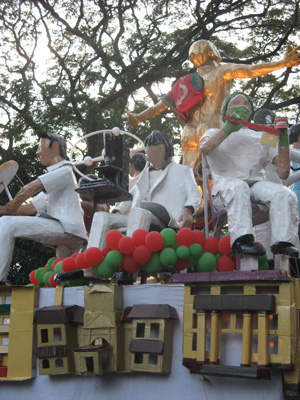 I’m not sure if it’s normal for other UP colleges to be a part of the Diliman Lantern parade, but I’m guessing that they were there for the centennial celebration. This was the lantern of the College of Medicine, which immediately reminded me of my nutty boyfriend who wants to take up medicine in the Philippines when he’s done with his MA. 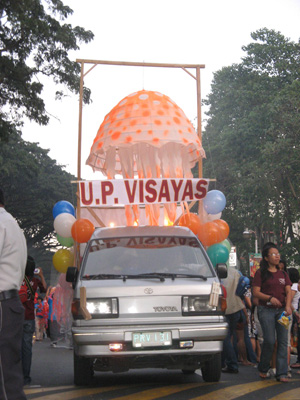 UP Visayas represent! The lanterns of UP Mindanao and UP Los Banos were really pretty too, but I wasn’t able to get any decent photos of them. 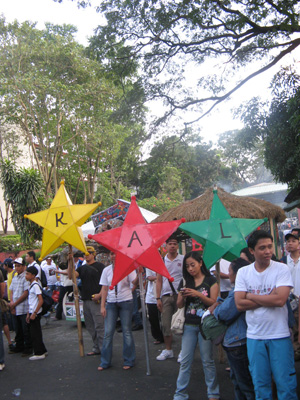 And last but not the least, College of Arts and Letters represent! Our lantern is that white thing behind the parols, and my excuse for not getting any decent photos of it was that I joined the parade and marched behind the lantern when our turn came. Besides the marching bands, the dancing, and the overall festive atmosphere, what I really liked about the Lantern Parade was that people can use it as an avenue for expressing their political concerns. Here is the Center for Women’s Studies championing for the approval of the Reproductive Health Bill. 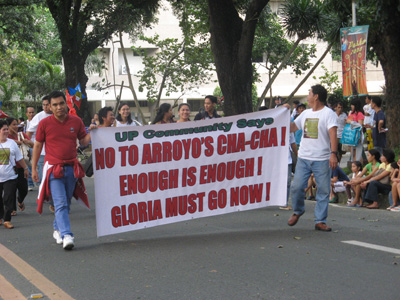 And of course, the UP Community rejects the charter change and Gloria Macapagal-Arroyo in general.

Next year, I will take better pictures of everyone’s lanterns. And if I’m really lucky, maybe my boyfriend will be able to fly out and join me!