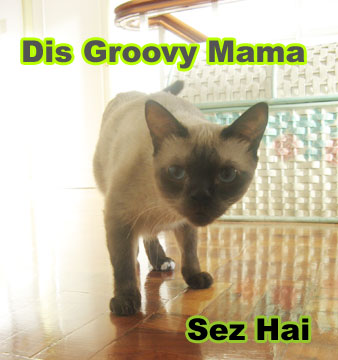 It started when I exclaimed “That’s awesome!” to a plurk. Was it Baddie or Pau who noticed that I said that? I forgot who, but Helga begged that I utter LOLcat words. Lauren seemed visibly “annoyed” that her friends were encouraging me to LOLcat speak. If you don’t know yet, LOLCat is an image combining a photograph, most frequently a cat, with a humorous and idiosyncratic caption in (often) broken EnglishÃ¢â‚¬â€a dialect which is known as “lolspeak”, or “Kitteh!”. The truth is I find LOLcat so funny. I love our cats and I sort of speak LOLcat to these furry creatures. I know my limits. I will sound ridiculous at my age to utter LOLCat words.

Many years ago, I believed it would have been far out . Can you dig it?

Being a seventies child, I often heard the word “generation gap” from my high school classmates. It occurred to me that one day I’d be a mother.

I’m not going to be that kind of mother.

I’d “betcha by golly wow” will strive to bridge that generation gap. I was gonna be in the groove of things. I twirled and peered into the mirror as I admired my long, waist-length hair, Hot Pants and neon orange top.

Yup, I will be a groovy mom. I will be their mother and maybe their best friend.

Fast forward. Twenty years later, the word groovy is a thing of the past. My two pre-teen girls under then the tutelage of a talented Choir Directress yelled “Spacey…that is not cool” as she disciplined the children’ choir members.

I asked her “So you often use cool?” I thought, so the word “far out” is ancient 70s slang. She looked me in the eye and said “You have to speak their language”.

Not only did I bridge the digital generation. I learned to be “almost as good” as the girls even better if I may humbly add. I learned to laugh at their jokes even if “whatever, whenever” often ticked me off. I offered my praises “That’s awesome!” and exclamations “Isn’t that a freak?” “Oh how cool!?” without losing my boundaries as a mother.

But one thing I will not oblige is LOLcat speak. I think that is pushing it, not to mention an embarrassment to my girls. But, I will just say it once here..

What do you think of your parents LOLcat speaking or up to date with the current idioms? If you’re a parent, do you think speaking their language is cool?

Thank you the lolcat translator.